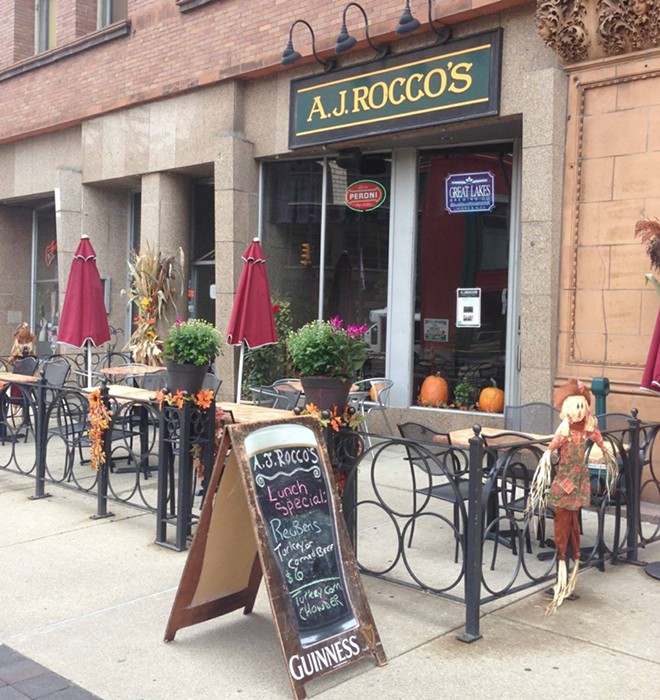 Facebook
After an 18-year run, A. Brendan Walton closed his popular Gateway District café/bar/music venue A.J. Rocco’s a year ago this past December. He did not have to look far for a new home. When it opens sometime this spring, the new A.J. Rocco’s will occupy a nearby patch of downtown real estate that most recently was home to Huron Point Tavern and, before that, Alesci's Downtown.

Following the death of Jeff Burson, operator of Huron Point Tavern, the owners of the 150-year-old three-story structure used the opportunity to begin an ambitious building restoration project. Architect Joe Hanna recruited Walton to consider the property as the new home of A.J. Rocco’s.

“To continue on, we thought about what we were lacking,” Walton says. “The big thing is we were able to establish a kitchen and we never had one at A.J Rocco’s. The events are great, but we have to be here not just for that but to have people come on any given night.”

A full kitchen will allow Walton to expand well beyond the pizza and sandwiches that sustained guests for years. The full-service bar and restaurant will be casual enough to accommodate families bound for Progressive Field, says Walton, but nice enough to attract couples on date night.

The removal of a main-floor bank vault added considerable space and light to the rear of the building. In addition to new windows and seating, the rear now features a stairway to a second-floor mezzanine that can be used for overflow and private events.

A.J. Rocco’s will still function as an all-day café, opening bright and early to dispense Cleveland Coffee products starting at 7 a.m. With nearly twice the space indoors and more than double on the front patio, the new spot will allow Walton to better capitalize on downtown events. Live music, always an important albeit intermittent facet of the business, will be revived at some point. A phase 3 might include some sort of rooftop bar.

Closing as he did at the tail end of 2019, Walton managed to escape the worst of Covid. He said that he has been able to sit back and observe other operators navigate the crisis, which will help him do the same when the time comes to open the doors.

“I just think this is going to be the most anticipated spring of our lifetime,” he says. "When I first opened A.J.'s in 2001, I was envisioning what we’re hopefully going to announce. It’s going to be new and fresh and it’s coming on the heels of one the strangest times of our life.”

Check out the promotional video below: