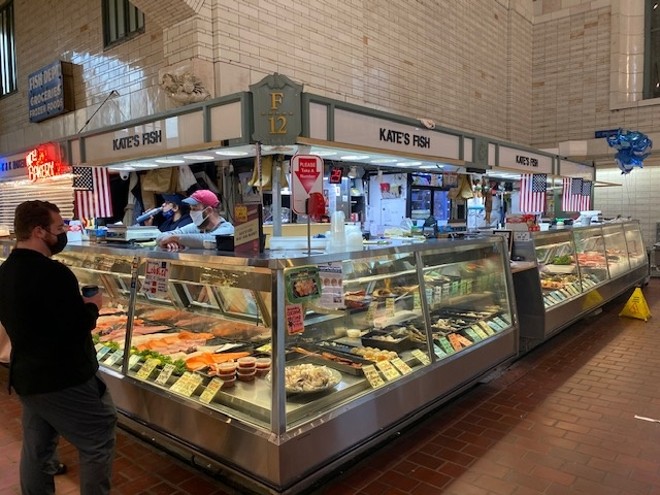 Courtesy Kate's Fish
As Kate's Fish continues to wage a public relations war against the City of Cleveland for its mismanagement of the West Side Market, and as prominent mayoral contenders Justin Bibb and Dennis Kucinich have emphasized the market's woes early in their campaigns, (which in Kucinich's case remains unofficial), the city announced Thursday that it had selected a consultant to review operations at the historic market at the corner of Lorain Avenue and W. 25th Street in Ohio City.

A contract with David O’Neil, an international market consultant who has worked on many prominent public markets in the United States, was finalized on Feb. 4, the city said.

City Council authorized $137,000 for a market consultant back in November. At the time, the city's Chief Operations Officer, Darnell Brown, told council that the consultant would review both the physical condition of the market and would conduct community engagement efforts to determine how to expand the market's role.

The city's announcement Thursday said that the local nonprofit Food Access Raises Everyone (FARE) would serve as the "equity partner" and would assist O'Neil with the engagement process.

O'Neil is already said to be collaborating with the city, but the Jackson administration and his Public Works department, overseen by Michael Cox, have been aware of physical deterioration at the market for years.

In the same release announcing the selection of O'Neil, the city said that it planned to spend more than $5 million in upgrades at the market in 2021 alone, including a new vendor booth prototype, electrical upgrades, a new meat preparation room and clocktower repairs.