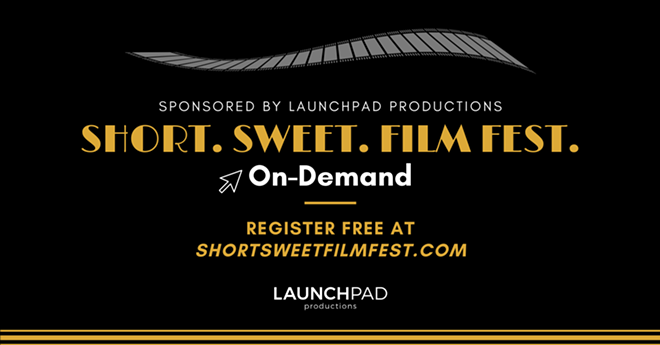 As Michael Suglio began to receive submissions for his annual Short. Sweet. Film Fest., he noticed the majority of the nearly 500 films he received fell into a couple of different categories.

“Either the films were clearly made before the pandemic and the filmmakers just finished editing them, or they were clearly made in isolation, and there are a few made during the pandemic,” he says in a recent phone call. The festival takes place from Feb. 24 to Feb. 28 at the Alex Theatre. For the first time in the annual film festival's history, movies will be available online too. “When you watch them, you can often see they took COVID safety protocols because there are only two actors at any given time.”

Now in its tenth year, the festival started when Suglio, who was watching a few bands play at the punk club Now That's Class, realized that hosting a film festival in an informal, club-like atmosphere would be a good idea.

In 2012, the first festival took place at Ohio City's Market Garden Brewery. It has since migrated to the Alex Theatre and expanded to five days. Because of the pandemic, the festival, which will feature very limited in-person attendance, will screen online for the first time this year.

“I had never put it online before but with our Launchpad sponsorship, we could hire the guy who builds our website,” says Suglio, who’ll screen just over 150 films (about half of which come from Northeast Ohio) at this year’s event. “We had to collect image thumbnails from all the filmmakers, and it’ll be very similar to any other streaming service you might be familiar with.”

Suglio says he especially likes Hobby, a locally made film about hobby horse competitions that he says is “really funny,” and Alive Day, a film about a paraplegic who can still swim.

“It shows the strength of the human spirit,” he says of Alive Day.

Both films screen on the festival's opening night.

To celebrate the festival's tenth anniversary, Suglio has also put together a special best of program he's calling 10 Years, 10 Films.

“We’ll show 10 of the best films from the last 10 years,” he says. “I did a Q&A with all of the directors. It was like a beautiful reunion. It was very emotional, and I almost started crying at the end. What’s a little sad is that one of the filmmakers, Rob Lucas, has passed, so [local filmmaker] Mike Wendt talks about his film, Stella.”

If you go to the Short. Sweet. Film Festival. website, you can register for free to watch all the films on-demand. If you want to extend the amount of time you have to watch the movies, you can add the whole month of March for $9.99.

“It’s not only the shorts but Q&As with many of the filmmakers and live table readings that will be on the website as well,” says Suglio. “I’m so thankful for our sponsor who was so generous to make it so we can offer it for free.”