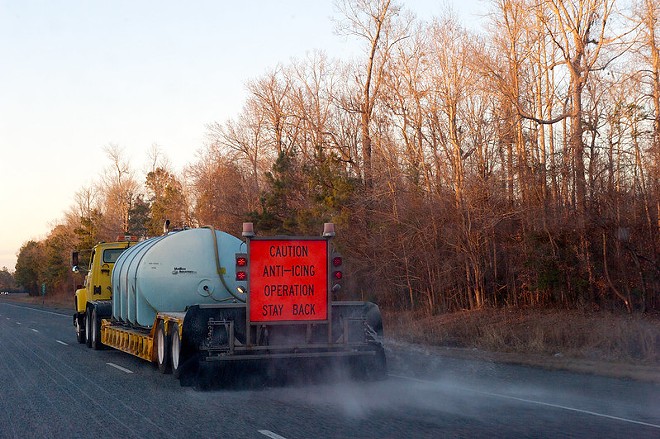 COLUMBUS, Ohio - Oil and gas industry waste that's used to melt ice on roads could become more prevalent in Ohio. Brine from conventional wells can be permitted for use as a deicer and a dust suppressant on roads by municipalities and government agencies.

House Bill 282 would classify brine as a commodity and loosen current regulations. Roxanne Groff, a Buckeye Environmental Network advisory board member, noted that high levels of dangerous toxins and radium have been documented in brine.

"What you're going to have," she said, "is toxic radioactive waste in a jug, sold from Lowe's and Home Depot and wherever, where the unwitting public will get its hands on it and use it as a deicing product."

Supporters have argued that the brine water is filtered and recycled. But as a concerned citizen, Jenny Morgan of Westerville countered that the bill would allow it to be spread anywhere, and not tracked.

"Legislators are being told, 'This is really different from raw brine. Raw brine's the bad stuff, raw brine's the dirty stuff.' And yes, that is allowed on our roads some," she said. "I wish it wasn't."

Proponents of House Bill 282 say brine water should not be classified under the same cumbersome regulations as raw brine. A House committee has not yet held a vote on the House bill. A first hearing was held on companion legislation in the Senate,
SB 171.

According to supporters, state testing has found applying brine water to roads poses a "negligible radiological health risk." Groff disagreed, noting that no long-term health studies or assessments describe it as safe.

"Toxic radioactive waste is just that," she said. "Radium-226 doesn't break down for 1,600 years. That's frightening. A bone-seeking, cancer-causing, radioactive material is a problem."

Morgan also said she thinks it's important to consider the ways brine can spread and contaminate soil, water, food and more.

"Children, families, spreading this on their driveway, spreading it on the sidewalk, tracking it in, breathing it in when it dries and turns to particulate matter," she said. "That's what I'm thinking about. It's just so upsetting."