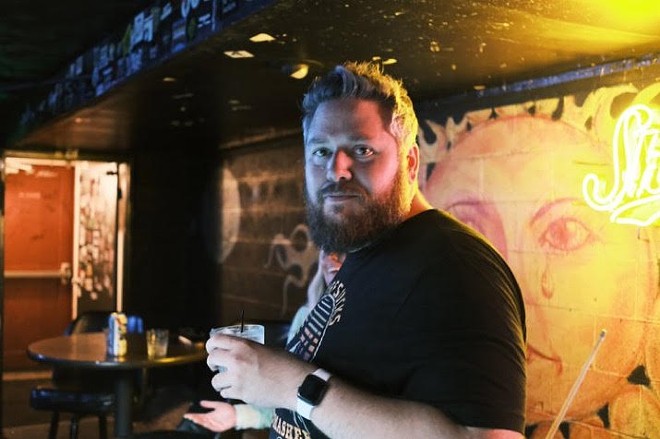 Recorded during a live performance at Hilarities, his new album, Bam Bam, finds him delivering a "clean" set in front of an enthusiastic audience that includes his parents. Squire's album comes out July 23 and is currently available for pre-order.

During a recent phone call, Squire talked about the album and his career.

Did you do standup prior to The Alan Cox Show or has that come after Alan Cox?
I’ve been doing standup for about 17 years now and have been doing The Alan Cox Show for the past eight-and-a-half years. I started doing standup in 2004 after I did a Mormon mission in the Philippines. I got in some trouble doing that and was excommunicated from the Mormon church. When I got home, I was looking for something that looked like I had some control over where the rest of my life was going to go. I went to an open mic at the Rose Theatre in Medina. It used to be the Medina Square movie theater and then it got turned into a performance space for a couple of years.

What was the comedy scene in Cleveland like back then?
There was still the Improv and Hilarities, and they were instrumental in my development, but there were a lot less open mics and showcase stuff, but there was a little bit. It was a growing scene back then. It was the forefront of social media, so MySpace was a great tool for me and other comedians for doing shows locally. I got onto the road within a year.

Does the radio show help you with your comedy skills?
Yes, it absolutely does, especially when it comes to being in the moment. The crowd work show that I do at Hilarities at the end of every month is just a live uncensored version of me on the radio, and I can riff on things and improvise a lot of stuff. What it mostly gives you is that we talk about so much and we talk about so many different things that it opens you up to things you weren’t really paying attention to. That’s expanded my standup. It exposes me to all these different things that I wouldn’t normally be exposed to. You develop a different voice than you would have if have blinders on and are trying to only write about yourself.

Part of it is that Alan Cox is so smart and takes these deep dives into social and political issues.
Oh yeah, he’s the best. It’s incredible that I’ve been able to work with him for eight and a half years and be a sponge around him. I just have fun with him. He’s very funny. Me and him have very good chemistry. People think our show is more written than it is, but it’s a lot of just being able to keep the beach ball bouncing around in the air. [Comedian] Mary Santora is a great addition to it too. She has terrific skills when it comes to improvisation, and it’s fun to come to work everyday.

What made you want to record a live comedy album during a pandemic?
I was approached by Helium Records. Mary [Santora] recorded an album for them in December. The guy who recorded it asked if I wanted to do one too. It was just a matter of what the dates were available. It all worked out way quicker than we thought. We thought it would happen in the fall, but it came together quickly, and we got it done in May, and it’s coming out in July. I put out four other comedy albums. It’s my favorite one. It’s great from top to bottom. We recorded it at Hilarities. Masks were still being worn. It’s just before they announced the end of pandemic stuff. Hilarities did such a great job all through the pandemic of social distancing and making sure patrons and employees wore masks and sanitizing. They reopened in July of last year and had no incidents throughout the pandemic. Nothing was traced back to them, and they had no fines. I wasn’t worried because I knew they would handle the situation well.

Is it too soon for COVID jokes?
No. Absolutely not. I think that’s how you get through it. I think people were making jokes all through the pandemic. There are different levels of it, but I think it’s okay to make jokes right away.

What was it like to do a clean show?
It was just different. It was like reprogramming my mind to not put those pause words in. When you’re using profanity, it’s often either as a pause word or to emphasize a punchline. But if you take it out the profanity, and you still get a laugh, you have a good punchline. If you take out the f-word, and you don’t get a laugh, you never had a good punchline. It’s just kind of streamlining the set and the content.

Your joke about staying healthy speaks to the moment but could probably be told ten years now. Do you intentionally try to create material that has some staying power?
It kind of naturally happens. I do craft it so things are not too topical. I like to have that evergreen comedy, so you can listen to it in ten or 20 years, and it’s still good. [George] Carlin’s stuff wasn’t just still relevant, but it became more relevant as time went on. It’s like he was prophesizing. That’s a high bar. Hopefully, some of my stuff is at that level, but just having something that’s funny now and will be funny ten years from now would be great. [Carlin] has a rant about the baby boomers, and that was almost 30 years ago and it’s just as relevant if not more relevant now as it was then.

You have a joke about dog poop. Did you really put it in someone’s mailbox?
Uh, I will go Sam Kinison on this one and can neither confirm nor deny.

You also have a joke about how mean your step kids are. Did you get any flack for that?
No. They’re a little older now. They grew up with me telling jokes about them. They get the idea. I won’t just go up there and just say they’re great. That’s not funny. [My stepdaughter] really said that to me. She has to take some responsibility. She did tell me that she hated me after I told her to refill the Brita pitcher.

I know your parents were at the show you recorded for this album. Is your family generally supportive of your comedic endeavors?
Yeah. Usually my parents are more supportive from afar because the content isn’t as clean. They’ve been supportive. They thought there was nothing else I could do, so when it comes to standup comedy and radio, they want me to go do it and make some money. I dropped out of college before I even started and barely graduated high school. All my other siblings are well-educated. My one brother is a lawyer. My sister has her master’s degree. My other brother has his master’s. I’m the black sheep in the family in a way.

What do they think of the Mormon jokes?
They don’t love those. I feel like I take it as good as I give it. As much as I’m clowning on the Mormon church and baptism, plenty of those jokes are at my expense.

Will you tour outside of Cleveland with the album?
The difference between comedy and music is that when you have an album in music, you go out and play that album. When you put out an album in comedy, people have already heard it, so they want to hear new stuff. Now, I’m working on new stuff. I have some new stuff on my website. I’m going to Pittsburgh in a little bit. I don’t do the road nearly as much as I used to since I need to be there for The Alan Cox Show. Also, traveling is not fun for me anymore. I’ll go out once a month or so.

The album will come out on vinyl. Talk about your decision to have the album pressed on vinyl.
I just asked the label if it’s possible. We’ll do a fall release on that. We have to figure out all that goes into that. I’m excited because I collected vinyl for about ten years, and I just love it. It’s always been a dream of mine to put something of mine on vinyl.