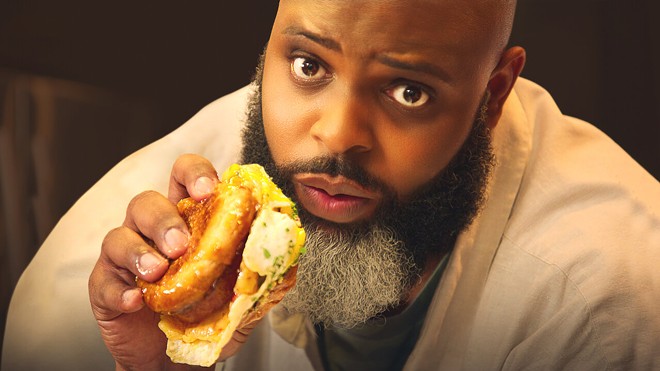 Netflix's new Fresh, Fried and Crispy series follows internet food critic Daym Drops — the man responsible for one of the greatest YouTube videos of all time — on a tour of American cities and their flagship fried delicacies.

Cleveland is the site of the eighth and final episode. As with other cities featured in the show's first season (St. Louis, Savannah, Baltimore, Birmingham among them), Cleveland gets to trot out some of the city's most popular chefs and some of their most radical takes on culinary staples.

Daym visits the food trucks outside the Rock and Roll Hall of Fame, the home of the Polish family who created Mom's Pierogies and the North Randall location of Beckham's B&M bar-b-que to sample that Cleveland classic, the Polish Boy.

Chef Rocco Whalen, chiefly of Fahrenheit fame, gets top billing with his so-called Cleveland nachos and his "Misteak on the Lake" cheesesteak, a majestic double deep-fried ribeye hoagie lathered in cheese sauce and topped with a runny egg. The Smokin Food Truck's "Fleetwood Mac and Cheese" dish, topped with deep fried burnt ends, gouda and chives, does the Rock Hall Plaza proud as well.

All featured menu items, not to mention Cleveland itself, are given A+ visual treatment, with ample drone footage and slo-mo shots of food dunked in Canola or Peanut Oil, as the case may be.

"Fried" and "Crispy" certainly upstage "Fresh" in the Cleveland cuisine here showcased, with nary a vegetable in sight across all featured items. The decorative sprinkled chives on the food truck items and the coleslaw atop the mountainous Polish Boy are the closest approximation.

But the region's Polish heritage is certainly celebrated in an extended section with the Domaradzkis, the family who were named "Grand Champions" of Pierogi Palooza in 2014 and who created Mom's Pierogies in Brooklyn. (One suspects that despite its appearances on the Food Network, Sokolowski's might have been featured in pre-pandemic days.)

Daym professes instant adoration for the B&M Polish Boy, the house hot sauce and other menu items, including Louisiana Catfish and wet-battered chicken wings. Though he loves everything he eats in Cleveland, he does crown a top menu item at the conclusion of the episode.