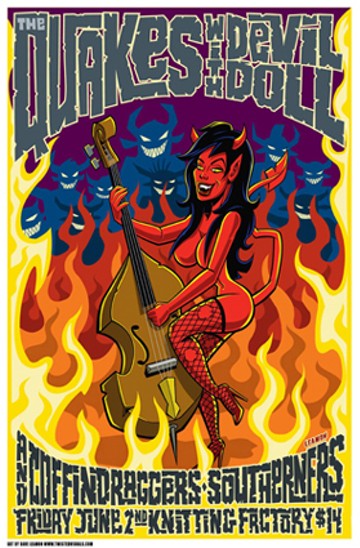 “I’ve always been devil doll,” says Colleen “Devil Doll” Duffy when asked about when she adopted the name that she currently uses when she records and performs. “Just ask my grade school teachers. I’m like the kid with the uniform and combat boots.”

A Cleveland native who went to grade school at Brooklyn’s Our Lady of Good Counsel, Duffy still thinks of Cleveland as home even though she’s lived in Chicago, New York, and L.A. She currently resides in Pasadena where she holds down a day job doing voice-overs, but she comes home regularly and is in town this week to play the Lakewood Car Kulture on Saturday afternoon. She’ll then perform that same night at the Beachland Ballroom.

Well-versed in old country music, she’s a throwback to the time of musical outlaws and renegades.

“I grew up listening to a lot of rockabily and Patsy Cline and remember hearing ‘Devil Doll’ by Roy Orbison and thinking, ‘Oh my God.’ I loved the name and trademarked it a million years ago. Now, we have a huge cult following. I love the devil and the doll because it’s the dark and light. You’re not going to hear Carrie Underwood singing Devil Doll songs.”

Duffy has started work on a new album but she’s keeping those songs a secret until the record drops later this year. Plus, her current catalogue is pretty extensive.

“I have a couple of new guys playing with us and they’re struggling to learn all the songs,” she says. “I told them, ‘These Devil Doll fans mean business.’ You have to know the songs in case they yell them out at the show. Our first record had like 17 songs and there are covers that we do like ‘House of the Rising Sun.’ I usually try to cover songs by men because it makes it more interesting. There was a poetic genius to those old songs. I just like music that has an authenticity to it.”