Titillating Tidbits: Tougher Inspection of Fair Rides in Ohio After Horrible Accident Has Some Operators Avoiding the Buckeye State 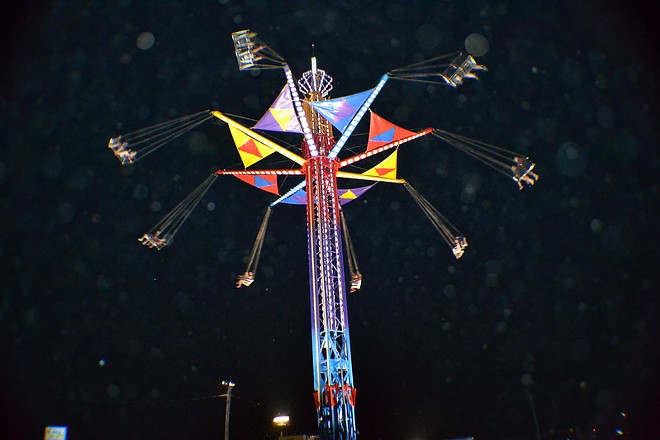 George Bannister/FlickrCC
A ride at the Trumbull County fair

Ohio legislators pushed for tougher inspections of carnival and amusement park rides after the horrendous Ohio State Fair accident in 2017 that killed 18-year-old Tyler Jarrell and left four others with severe injuries.

Its passage was a big win, even in state that, according to the Associated Press, already had one of the most stringent inspection policies on the books.

Now, however, carnival ride owners and operators have complained that state inspectors are too meticulous, shutting down rides for rust that, they claim, is on handrails and not part of the ride itself.

The state disagrees with that contention. From the AP's coverage this week:

“We will have a history that comes with each ride, whether it be a kiddie ride or a roller coaster,” said Dorothy Pelanda, director of Ohio’s Agriculture Department, which oversees ride inspections.

The head of the state’s amusement ride safety office, David Miran, said the law emphasizes checking a ride's structural components and that inspectors are told to err on the side of caution.

The specter of getting shut down has nevertheless led some to avoid the Buckeye state altogether, instead trucking their rides to neighboring states like Indiana and West Virginia that have more lax policies.

And that's left some fair and carnival organizers struggling to find a company willing to set up rides.

When a company that was to provide rides to for the Tusky Days festival in Tuscarawas pulled out, the city tried to make do, but didn't really pull it off.

All they could come up with were a few inflatable bounce houses and one kiddie ride.

“We were doing damage control all weekend,” said festival chairman Matt Ritenour. “Having a festival without rides is like having a beer garden without beer. You just can't have it.”

In neighboring Denison, only six of 11 rides were approved to operate during its four-day festival in June because inspectors had “zero tolerance for rust,” said Greg DiDonato, the town's mayor.

“I get that there was a tragedy. I get it, we want safety, but this is a huge overreach,” said DiDonato, a former state lawmaker. “I'm for ride safety, everybody is. But this will kill the small ride operators.”


Expect a big push by fair and festival associations in the statehouse to trim back portions of "Tyler's Law."

- Do you happen to be a fan of onetime Cleveland radio station 107.3 The Wave? A Redditor has built a Spotify station that includes instrumental songs, including some rare cuts, from the station's history (1998-2019).

- After Ayesha Bell-Hardaway decided to return to the Cleveland consent decree monitor team, more good news arrived on that front this week.


- You've probably heard by now that AOC and Bernie Sanders will be in Cleveland this Saturday and next Saturday, respectively, to rally for Nina Turner and get out the vote.

“I am beyond excited to endorse my sister-in-service, a champion for regular, everyday people, Nina Turner. She has committed her entire life to thoughtful public service and advocating for policies that do the most for those who have the least,” Bush said in her endorsement for the OH-11 special election.

- It's not surprising who had the worst takes after the Indians announced they will be changing the team name to the Guardians. And naturally those people will be making the name change part of the race to succeed Rob Portman in the U.S. Senate.

Yeah, the name change is gonna be a thing in #OHSen, especially if (when?) Matt Dolan — whose family owns the soon-to-be-Cleveland Guardians — enters the GOP primary. pic.twitter.com/bJTEdGrFdJ


- It's hard to get excited about the Greater Cleveland Sports Hall of Fame but the inductees this year go a long way toward changing that opinion.

4 — Kiosks being installed by the Cleveland housing court around the city so that people without broadband at home can attend hearings virtually.

$2.5 million — Amount ODOT gave toward planning and studies for the Browns/Cleveland lakefront park and mixed-use development this week.

1 - Rank of the Cleveland Clinic in a new study listing the hospital systems that devote the least resources to charity care and community investment. The Clinic was dead last.


- Vintage photo of the week:

Stone carvers pose on one of the #Cleveland Guardians of Transportation, ca. 1931.