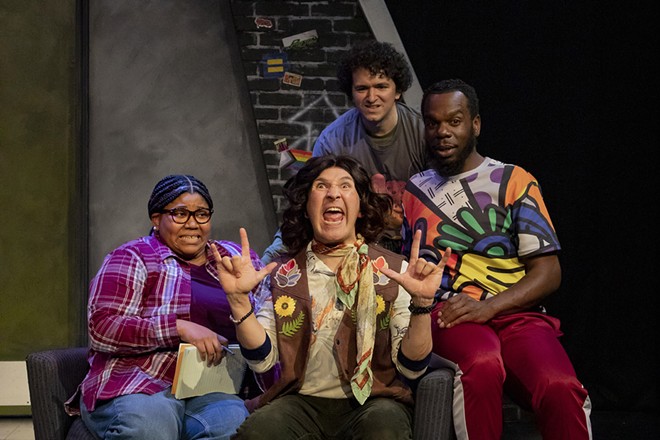 Steve Wagner Photography
'Airness' is on stage now at Dobama

If you had the desire to learn guitar as a teenager, the most difficult part of the task was dealing with the instrument itself. It's so much easier to just eliminate the damn guitar and proceed directly to a fantasy of the performance.

With that in mind, "air guitar" has been a thing since Woodstock, when Joe Cocker mimed playing one during his growling rendition of "With a Little Help from My Friends." That act simultaneously electrified and distressed the crowd since it seemed his spastic arm and hand gestures might indicate a seizure of some sort. But no, he was just swept away by the music and decided to join in by shredding with an axe that didn't exist.

This arcane art form is celebrated in "Airness" by Chelsea Marcantel, now at Dobama Theatre. Four men and one woman, veteran air guitarists and semi-professional nerds, are getting ready for the U.S. Air Guitar Championship, mulling over their crucial song choices, and alternately poking at and stroking each other's tender egos. They each have a customized persona and a stage name to go along with their 60-second performances.

Into their midst arrives Nina, a young woman who also plays a real guitar but who is still interested in the high-energy, highly-costumed air guitar world. Sure enough, she soon overcomes some mild objections from her new pals and starts learning how to fit in with the help from Shreddy Eddy, one of the air guitarists. He informs her that while there are six pillars of an air guitar performance, the most important and mystical one is "airness," that undefinable state of being one with your invisible instrument.

After a couple rookie stumbles on stage, Nina takes on the less-than-wildly-imaginative persona of "The Nina." Cannibal Queen then reasonably asks where The Pinta and The Santa Maria are. In any case, The Nina's air guitar career is launched.

Under the direction of Nathan Motta, the cast is always engaging and appropriately hyped. Luke Brett's Shreddy Eddy is all twitchy energy but also serves as a thoughtful tutor for Nina while Tim Keo as Face Bender believably channels a familiar, cliché flower-child vibe. Golden Thunder is played by Corin B. Self, who shows some serious dance moves and creative presentation as he pulls off various parts of his Tesia Benson designed costumes to reveal...yet another costume.

Erin Scerbak as Cannibal Queen is a refreshing, downbeat counterpoint to the waves of testosterone coming from the others, and she ignites when she hits the stage. In the role of the Announcer, Trey Gilpin finds interesting ways to make what could be a thankless part quite amusing, including his own between-scenes invisible guitar shreds. As hotshot egomaniac D Vicious, Mike Glavan struts and strums with style, but in the dialog scenes his arm motions get a bit out of control.

As The Nina, Mariah Burks is properly quiet and shy at first, but Nina's blossoming as an air guitar idol is undermined by a script that always makes the obvious choice when a surprise turn or twist might work better. After a mediocre performance in the semi's to qualify for the Nationals, she loses but—gasp!—is given a last-minute chance to win a "Dark Horse" invitation And then during the championship round, where of course all our faux strummers are finalists, the winner is chosen (and you'll never guess who it is!).

The brief snatches of rock songs by Bon Jovi, REO Speedwagon, Joan Jett and others keep the play alive and pumping. While playwright has thrown light on a curious subculture and fashioned some interesting characters, her dialog often lapses into telling us too much, denying us the pleasure of discovering those thoughts on our own.

This is the first show in Dobama's redesigned space, with the audience placed in a slightly curved seating area that embraces the stage, and it's a huge improvement that brings the action closer to every patron. Scenic designer Aaron Benson's set is dominated by the air guitar stage which takes on the angular shape of many electric guitars. And T. Paul Lowry's projections add an interesting dimension to the proceedings.

Airness is the kind of show that deserves and needs a raucous audience that can shriek, stomp and scream at every jump, slide and gyration. That's when this show will truly discover its own "airness."