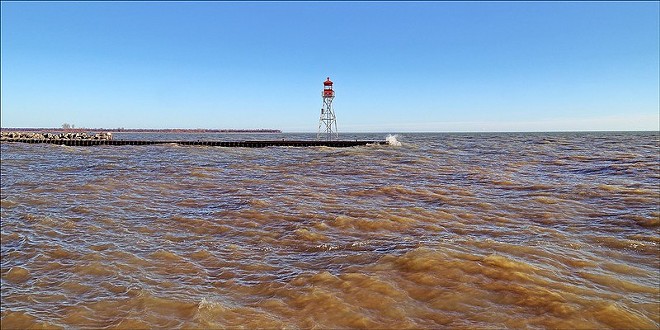 Lake Erie
Sue Thompson/FlickrCC
The Great Lakes are reaching record warm temperatures, which could generate more lake-effect snow, threaten fish habitats, and disrupt livelihoods that depend on the massive bodies of freshwater.

The temperatures of each of the five lakes are about five to six degrees above average, according to the National Oceanic and Atmospheric Administration.

Rising temperatures are the most dramatic in Lake Superior, the biggest and coldest of the Great Lakes. It reached nearly 60 degrees in early October, the warmest on record and about 6 degrees higher than its average of about 52 for this time of year.

In the other Great Lakes, temperatures were three to five degrees higher than average.

The Great Lakes hold about 20% of the planet’s surface freshwater, provide water to more than 30 million people, and affect weather in Michigan and other states.

In a recent study reported by The Washington Post, scientists analyzed 60 lakes in the Northern Hemisphere and discovered water temperatures have steadily increased over the past 100 to 200 years. In the past 25 years, water temperatures increased more than any other quarter in the past century. As a result, the lakes are losing ice cover, and water levels are shrinking.

By the end of the century, the planet is expected to heat up by 4.9 degrees. If the trend continues, Sharma estimates that about 5,700 lakes could permanently lose ice cover by 2100.

Warmer lakes could also mean more snow, increased flooding, increased precipitation in the winter and spring and less in the summer, increased runoff and bacteria levels, damaged ecology, erosion, negative effects for fish and direct impacts on shipping as well as recreational boating activities, according to a 2019 report titled, An Assessment of the Impacts of Climate Change on the Great Lakes.

“Climate change is now adding more challenges and another layer of stress,” Dan Wuebbles, the report's lead author, said in a statement. “This report paints a stark picture of changes in store for the lakes as a result of our changing climate.”
© 2022 Cleveland Scene