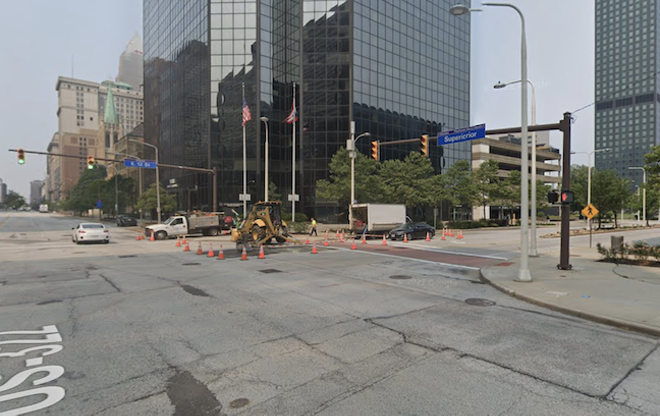 Google Maps
The intersection where the shooting took place

The Cuyahoga County coroner today identified the man shot and killed by Cleveland police near East 12th and Superior on Sunday afternoon as 39-year-old Patrick Horton.

Horton was seen with a gun, firing shots at cars and into the air, around 3 p.m. on the east side of downtown. When on-duty Cleveland officers arrived on scene after calls from witnesses and two off-duty cops, Horton was ordered to put the gun down. He did, but picked it back up and shot at the officers, Cleveland Police Patrolmen’s Association President Jeff Follmer told reporters. They returned fire and killed him.

The shooting created a frenzied scene at Masthead Brewing Company, with patrons running behind the bar, and at other places along Superior.

"Some guy walked by all the windows along Superior and was pointing the gun at us. Everyone scattered," a witness told Scene. "I ended up moving towards a door and watched him walk down Superior to 12th. He shot in the air. Cops came and he put his gun down but apparently went back to grab it and pointed at them and they just unloaded on him."

Streets around the area were closed for hours afterward as the Browns game let out.
© 2022 Cleveland Scene