Plaintiff, Defendant, and Judge: How Some Ohio Counties Entrust the Same Officials to Collect Taxes and Wipe Liens 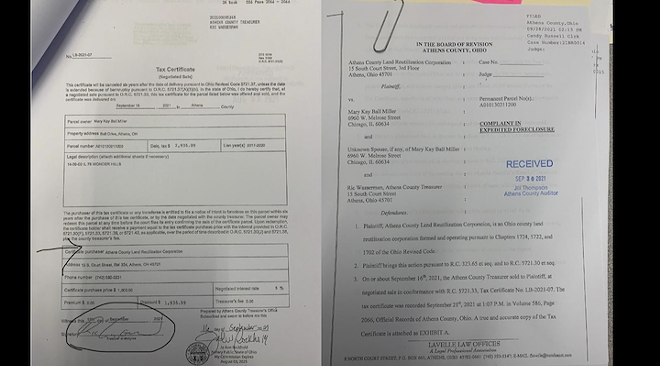 Eye on Ohio
A typical setup in smaller counties: On the left, a tax certificate obtained by the Athens County Land Bank, signed by Land Bank Board Chairman Ric Wasserman. On the Right: The Land Bank seeks to foreclose on a property, so the land bank files for expedited foreclosure. In addition to being on both sides of the case, Wasserman is also on the Board of Revision which hears expedited foreclosure cases.

This project was funded by a grant from the Pulitzer Center and provided by Eye on Ohio, the nonprofit, nonpartisan Ohio Center for Journalism. Please join the free mailing lists for Eye on Ohio as this helps provide more public service reporting.

Shortly after Athens County started a land bank in 2018, Matt Bunting put in a land bank application for an abandoned church next to his property. Neighbors had taken turns cutting the grass, but overgrown trees had fallen on a house, garage, and car.

After waiting years, Bunting had given up hope. He said land bank officials offered the property to the Buchtel Village Council. They declined, knowing that Bunting had applied. Finally a neighbor asked if he might try instead, so at least someone would be able to prevent squatters or worse. Officials approved the neighbor.

As part of its investigation into how public officials divvy out land bank properties, using machine learning methods, Eye on Ohio focused on counties where property foreclosures skip sheriff sales and go right to a city or land bank.

Under an Ohio Revised Code Section 294’s “expedited administrative tax foreclosure,” Board of Revision officials theoretically only hear foreclosure cases where the properties are abandoned and there are no other legal issues. But in most small counties, BOR members bring the cases in the first place, and later decide who gets the properties. That’s because of overlap between city officials, the BOR, and the Land Bank.

Bunting wouldn’t speculate on whether his denial might relate to his previous opposition to starting the land bank, which, as treasurer of Athens City Schools he voiced publicly.

Land bank chair Ric Wasserman said both were qualified for the parcel, but since the other application promised to preserve the structure, and the land bank felt it had historical value, so they decided to go with the latter.

Bunting first went through a qualification process, then applied for the parcel in March 2019. Officials got title to the parcel in August 2020, offered it to the Buchtel Village Council in October 2020, and Bunting’s neighbor John Hurd applied in late February 2021. In September of this year, Hurd got the parcel.

Wasserman’s notes state: “Upon realizing that this is a useable building and not the dilapidated structure we were led to believe it was pre-foreclosure, [Athens County] Commissioner [and Land Bank Board member Christopher] Chmiel approached the Village Council about whether they would like to use the building for the local government. After conferring with the two potential end-users the village decided they did not want it.”

When counties establish a land bank, they get access to DTAC, the delinquent tax and assessment collection fund, which comes from 5% of delinquent property taxes. Land bank officials can vote for up to 5 percent more.

Bunting originally opposed the land bank because he worried that Athens school district, which has most of the population in the rural county, and therefore gets most of its property taxes, would effectively subsidize areas with abandoned buildings.

“It was supposed to be a faster, smoother process for them to take property and turn it into taxpayer property. My opposition was the way they chose to fund it,” Bunting said. “Schools would be hit the hardest.”

Eye on Ohio found that most parcels were concentrated outside of Athens, though they tended to be among the worst tax-delinquent land in the county. The House on the Hill

On a small overlook in rural Athens County stand two mismatched houses: one the clean, well-kept house of resident Russell Halbirt. Down the road is a scene from a horror film— an old, decrepit mobile home. Halbirt is involved in the community as a Canaan Township Trustee. His neighbors fled the area.

Halbirt said no one had lived at the property since 2008. He often called police when vagrants broke windows or used it as a drug den. Since he was finally able to get title to the land in 2021, he has breathed a sigh of relief. But why did the property sit vacant for 13 years?

In 2004, H.B. 294 established the “expedited administrative tax foreclosure” in Ohio. It didn’t really take off until county land banks came around in 2009.

County Boards of Revision usually rule on property valuations. If a resident, for example, has property valued at $1 million by the county Auditor, but feels it is only worth $800,000, they can go to the BOR showing recent sales for similar properties.

BOR members don’t have to pass the lawyers’ bar, even if they are ruling on H.B. 294 foreclosures. And unlike most public officials who direct where money or property goes, land bank board members do not have to file yearly ethics reports.

But she opposes the BOR process. She said it could easily be abused.

“I think it just puts him in an awkward position,” Thompson said. “When he has his Treasurer hat on, he has a motivation to get the taxes back. When he’s the Land Bank President, he can wipe the tax lien. How do you have any independence?”

She also is concerned because in a sheriff’s sale proceeds go first to the tax lien, then to the homeowner. In a BOR foreclosure, the state and the owner get nothing.

Athens came under fire recently when they almost foreclosed on the home of Zoltan Krompecher, an Army veteran and former Green Beret. Krompecher had been an Athens resident his whole life. He attended Ohio University where he met his wife. When Krompecher entered the Army, he and his wife bought a home.

Even though Krompecher has moved many times while serving, they continued to make payments on the home until it was paid off. The couple planned to permanently move to the home after Krompecher retires.

Then, about two years after the home was paid off, Krompecher received a notice from the Athens Clerk of Courts: He would lose the house if he didn’t pay delinquent taxes. Krompecher had updated his address with the city of Athens, but that didn’t update his address with the county of Athens. Having paid taxes for years through his escrow account, he had never received a direct bill for his taxes.

Three letters were sent to the incorrect address informing Krompecher of delinquent taxes – none of which Krompecher received. When he called the treasurer’s office to pay the taxes and keep his home, he was told the company Taxease had purchased the tax lien on his house. Krompecher owed more than $5,400 of taxes and paid at least $12,000 in fees.

“I wouldn’t say ‘betrayed,’ that’s a strong word, but we were so upset by the whole situation,” Krompecher said.

Every year at the Ohio Land Bank Conference, counties talk strategy. They share success stories, sponsors such as lobbyists advertise their services, and talk about a persona non grata: Marc Dann.

Dann is, depending on whom you talk to, the disgraced former Attorney General attempting to torpedo thousands of clear titles to zombie properties to the tune of class-action legal fees. Or Dann is the unlikely hero of countless homeowners who say their home value was stolen by local officials.

Dann sued Cuyahoga and Montgomery counties to overturn the entire BOR process, which he says drained a client’s property equity shortly after the client’s wife passed away.

After losing at the Ohio Supreme Court, Dann’s claims continue in federal court. He recently lost a motion to get his case certified as a class action. He is appealing that decision to the federal Sixth Circuit Court of Appeals.

On Dec. 15, Dann argued that his cases should be heard altogether. Opponents have until Jan. 26 to reply. 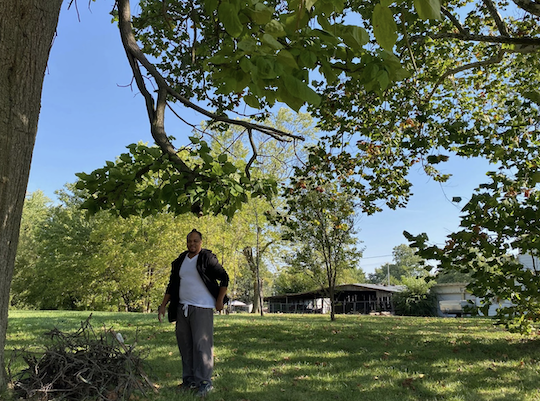 Eye on Ohio
Devin Morning outside his new lot in Lima, Ohio.

On the opposite side of Ohio, in a white nondescript room in Allen County, officials gathered early one September morning to foreclose on a property in Lima.

No judge walked into the room because for this particular type of case, no justice will hear it. Camera equipment sits atop a computer monitor on one end of the room, but the meeting was not live-streamed. Allen County’s land bank website is no longer functional, but residents can still apply for land bank properties.

In Allen County, the number of years a property sits vacant and the amount owed does not help predict its entry into a land bank.

This meeting was the culmination of months of hard work for Devin Morning, a resident who had applied to get the property on West Kibby Street.

Morning said the property had caught fire after it was abandoned. City crews demolished the structure. An elderly woman next door couldn’t take care of it. Morning would clean up trash and gather sticks from a giant beech tree on the property.

Next door Frenjula Jackson cares for his elderly neighbor, her father. Jackson said she was also able to get a Land Bank property near her own home though it took two years to get it.

“We were taking care of it, it was just a waiting game,” Morning said. “I’m happy.”