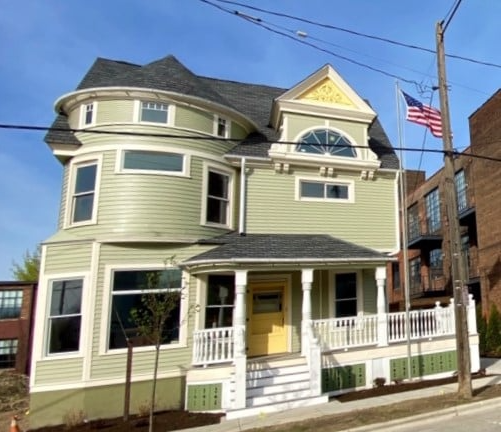 Cha Facebook
Cha Spirits and Pizza to reopen this spring in Ohio City.


They say “the third time’s the charm.”

This spring, Susan Walters will put that idiom to the test when she revives Cha Spirits and Pizza Kitchen, a restaurant with two previous runs. The veteran restaurant owner and consultant launched Cha in 2014, in the former home of Battery Park Wine Bar. The popular neighborhood spot that specialized in small plates, stone oven pizzas and well-picked wines, closed after three years. But shortly thereafter Walters announced that she had found a new home for Cha, in the former Pasta and Pastries building on Whitman Ave. That ill-fated landlord-tenant arrangement lasted less than a year.

For number three it looks like Walters once again has secured an unconventional spot, this one in the former VFW building next door to the Tinnerman Lofts building in Ohio City. The restored Victorian on Fulton Road shares a beautiful courtyard with the Lofts, one that includes a wood-burning oven and bocce ball courts. Walters says that she hopes to open in May.

“We are so excited to have Cha return to Ohio City this spring. It's been a long few years riddled with twists and turns, ups and downs, and delays, delays, delays but the journey is going to be well worth it. We are thrilled to be a part of an amazing restoration project and as pioneers of Ohio City proud to maintain the historical integrity of one of our many neighborhood gems.

Cha at Tinnerman will have all the glam of our Battery Park location and all the charm of Whitman Avenue, both of which we kept on this page, as the location may have changed but the great memories, friendships, and spirit never waned. Along with our amazing pizza and other treats, Cha at Tinnerman boasts lucious [sic] gardens, relaxing alfresco dining areas, an outdoor forno oven, along with a full-service bar, private dining rooms, and retail for all your wine needs!”