Cleveland Classics: Le Petit Triangle Is As Charming and Delicious As Ever 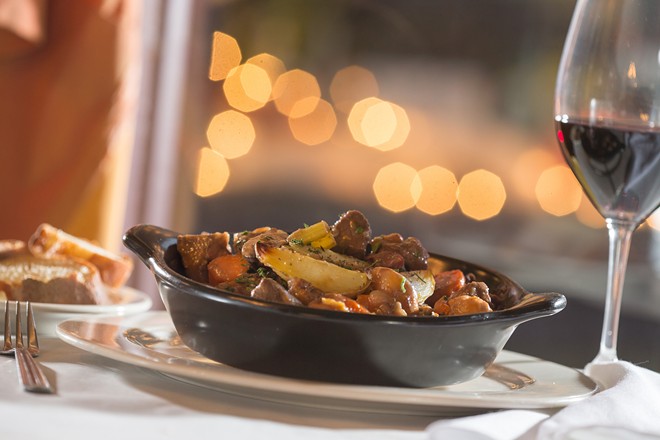 On a recent Sunday morning, my wife and I squeezed into the last pair of available seats at Le Petit Triangle Café. Our table was situated in the front window of the original pie-shaped space – le petit triangle – which is less of a dining room with an open kitchen than a kitchen with a few extra seats. The snow outside was accumulating at a rapid pace, but that didn’t slow the steady stream of optimistic walk-ins, who waited for tables in the heated enclosed patio. Sipping our Bloodys and Pamplemosas, we decided that there was nowhere in Cleveland we’d rather be.

To know the story of Le Petit Triangle is to know the history of modern-day Ohio City. This irreplaceable bistro’s origins stretch back 20 years to a quirky incubator called Market 25, which was located where Bar Cento and Bier Markt had long held court. It was there that a woman named Denajua introduced many of us to authentic French crepes, which she crafted while delivering a litany of salty bon mots. When that retail experiment went bust Denajua relocated her crepe stones to Fulton Road, where she opened Le Oui Oui Café. A year later she sold the bistro to a new owner, who in turn sold it the following year to yet another operator with no prior restaurant experience.

Stepping in to save the day were Tom and Joy Harlor, who for a decade prior had been running the popular Tremont deli Take-A-Bite. After moderate but meaningful interior modifications (and the removal of some risqué art), the Harlors debuted Le Petit Triangle in 2007. Originally, the new owners had planned to move away from the crepes, but instead they embraced and improved the roster of sweet and savory filled pancakes.

Since originally reviewing the restaurant the year it opened, I’ve been back only a handful of times, which is a shame. If there’s a downside to this beat, it’s the inability to return to established places because we are too busy covering the new. Going forward, Scene will endeavor in these pages to highlight more of the people and places that have stood the test of time. After all, sticking around is its own mark of achievement and excellence.

While many people would consider W. 25th Street the heart of Ohio City, true admirers might place that pin closer to the intersection of Bridge and Fulton. There, stalwarts like Momocho, Johnny Mango, Le Petit Triangle and nearby Heck’s have a combined 110-plus years of service, which doesn’t happen by accident. Over here, the pace is slower, the locals are more plentiful and it’s nearly impossible to not bump into an owner-operator.

Over the years, the Harlors have made incremental improvements to the space, food and vibe, but the Triangle has always stayed true to its original mission to serve the neighborhood.

“We’re a café,” Joy explains. “We’re not here to be the highest-end spot. We’re here to serve a really good product at a decent price point for the neighborhood. There are a lot of times I’ll walk in and the clientele is three-quarters neighborhood people and I know and greet them all. That is the most lovely thing.”

Two years in, The Harlors took over the next-door space from Kimo’s Sushi (another Market 25 alum), which bumped up the occupancy from 24 to 55. When the front patio was established, that number climbed to 75 in season.

Day, night or weekend Le Petit’s menu is loaded with appealing bistro classics. Some items carry over from one menu to the next, including the irresistible escargot ($10). Presented in the shell, bathed with parsley-studded garlic butter and paired with bread, the dish is required eating. Don’t sleep on the mussels marinière ($9) and salt cod potato cakes ($9), the kitchen’s take on bacalao that is paired with garlic-lemon aioli.

Like any good bistro, this one glides easily from French onion soup to beef bourguignon. Friends meet for happy hour here to share a cheese plate, some oysters on the half shell and a bottle of wine or pop in post-dinner for bananas foster crepes and frothy cappuccinos.

Brunch here is in high demand, when neighbors amble from nearby homes for boozy coffee drinks and breakfast, brunch and lunch dishes. In addition to french toast, omelets and savory crepes, there are hearty plates like the steak tartine ($18), a pan-seared strip topped with a pair of fried eggs and served with roasted potatoes and toast. No surprise, the kitchen makes a decadent Croque Monsier ($11), a ham and cheese sandwich on eggy challah capped with creamy béchamel.

The gap between these recent visits and my next won’t be as long as the last one.