Savage Love: How Much Spooge Can One Man Drink? 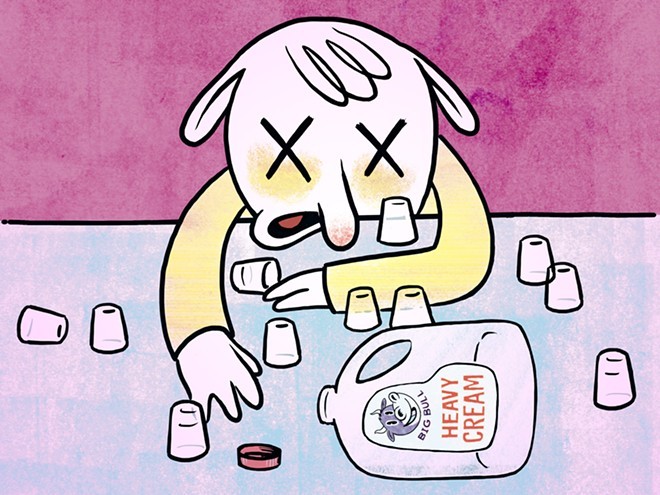 P.S. I would've called into the podcast, but my sister is a listener, and I would rather not share this info with her.

Before anyone can jump in the comments and post “FAKE” in all caps, CC enclosed his Twitter handle in a post-post-script, which allowed me to verify that he’s for real. What’s more, a quick scroll through CC’s Twitter revealed that he’s not the only person out there methodically acquiring and chugging enormous amounts of semen. As it turns out, there’s a thriving community of “cumbulls” online who enjoy supplying, and even more cumguzzlers like CC who enjoy imbibing. (Sadly, CC asked me not to publish his Twitter handle, so you’ll just have to trust me: this letter is not a fake.)

Now, before I bring in the medical expert you hoped to hear from, CC, I wanna say this to my other readers: Nothing about CC’s kink appeals to me personally — it looks like way too much of a good thing — but CC and his cumbulls aren’t hurting anyone. Indeed, the world would be a better place if it had more Canadians like CC in it and fewer Canadians like those fascist assholes in trucks currently blocking border crossings.

“It seems like there are two questions here,” said Dr. Josh Trebach, an emergency medicine physician and a medical toxicology fellow in New York City. “The first question is the risk of sexually-transmitted infections (STIs), the second is, ‘How much is too much?’ Is it safe to drink large volumes of semen?”

Dr. Trebach looked at the medical literature, CC, but found it “extremely lacking” for individuals who freeze, thaw, and drink large amounts of semen. Yours is an underserved (except when you’re being overserved) and unrepresented (except on Twitter) population.

“But we do know that sexually transmitted infections (STIs) can be transmitted from performing oral sex,” said Dr. Trebach. “This includes syphilis, herpes, gonorrhea, chlamydia, and HIV. And while it’s tempting to assume the freezing and thawing process would create a less welcoming environment for STIs, there’s evidence to suggest some STIs survive the freezing process quite well. Gonorrhea can survive temperatures lower than -300 degrees Fahrenheit for over a year. Chlamydia has also been able to survive after being frozen.’’

Now, STIs are not spontaneously generated when semen comes into contact with saliva, of course, nor are they spontaneously generated when someone packs their cum in dry ice and ships it off to a stranger they met on the Internet. “But given the lack of data for those that freeze, thaw, then drink semen, I would encourage anyone doing this to err on the side of caution and assume practically the same risks as performing oral sex,” said Dr. Trebach. “This means knowing the STI status of you and your partner(s) and engaging in appropriate prevention strategies, e.g., PrEP, and frequent STI testing.”

So, let’s say your cumbull has been tested and is currently STI-free and in a monogamous relationship with someone who has also been tested. Or tested, STI-free, and supplying his semen to men and women like you is his sole sexual outlet. If that’s the case, CC, you shouldn’t let an exaggerated fear of contracting an STI stop you from pursuing this pleasure. That said, CC, the more cumbulls you add to your herd, the greater your risk for contracting an STI becomes. Obviously. So, for safety’s sake where STIs are concerned, you should stick with your trusted supplier, even if that means longer waits between shoots.

“So, how much is too much?” said Dr. Trebach. “In toxicology, we use a concept called the ‘median lethal dose,’ or ‘LD50,’ to describe how toxic a given substance is. The LD50 is, basically, the quantity of a substance that would kill 50% of people who were exposed to it — or in CC’s case, ingested it. It would be theoretically possible to extrapolate from human or animal data on the lethal dose of each individual ingredient (such as zinc) to come up with the LD50 of semen, but this would be theoretical and imprecise.”

And now a little science, a little math, and a little guesswork (from me, not Dr. Trebach): Zinc is a trace element that’s important for our immune systems, metabolic functions, our body’s ability to heal wounds, and the production of important enzymes. Adult males should ingest about 11 milligrams of zinc daily, a single teaspoon of semen contains about 3% of that, and there are 203 teaspoons in a liter. So, if you were to drink an entire liter of semen, CC, you would be ingesting roughly six times your daily recommended allowance of zinc, or 66 milligrams. Assuming you don’t have some other, undiagnosed health condition, that’s probably not enough zinc (or semen) to kill you, but it is enough to make you puke.

“My opinion is that if you're drinking so much of anything that you feel like you're going to vomit, you should probably cut back, as that may be your body's way of telling you something is wrong or that there is too much of something present,” said Dr. Trebach. “And continuous irritation to your gastrointestinal tract through direct injury, distension, and repeated exposure is not advised.”

And even if there might not be enough zinc in a liter of semen to kill you — or enough citric acid or fructose or potassium or cooties — that doesn’t mean it’s safe to quickly ingest a liter of it.

“An age-old adage in the world of toxicology is that the dose makes the poison,” said Dr. Trebach. “Even things that may seem benign — water, candy, semen — can be deadly with a high enough dose, and you can have ‘toxic’ effects well below a lethal dose. In one liter of semen there’s enough sodium to surpass the recommended daily intake of sodium, and that’s just not really healthy.”

People have actually died from drinking too much water, CC. It’s rare, but it happens. And it stands to reason that if a person can die after drinking 3-4 liters of water over the course of a few hours — which, again, has happened — it wouldn’t surprise anyone to learn a person died after drinking an entire liter of semen over 140 seconds, i.e., the maximum length of a video clip posted to Twitter. You say you don’t want your sister finding out about your kink after hearing your voice on my podcast, CC, and I have to assume you don’t want your sister — or the rest of your family — finding out about your kink after hearing from the coroner.

I have a lot of mottos, CC, and one of them is, “Moderation in all things — including moderation.” Your kink is not my kink, CC, but your kink is OK, as the saying goes, and your kink is about the consumption of immoderate amounts of semen. But I would advise you, as I have advised many others, to be moderate about how often you’re immoderate. In your case, that means carefully choosing your cumbulls, puking when your body tells you to puke, and cutting back on the semen if your body needs to puke each time you do this. Otherwise, enjoy.

But the final word goes to Dr. Trebach, who wanted to add a quick disclaimer: he hasn’t examined you or taken a full history and physical, CC, so he doesn’t want you to think this is true medical advice. “And I know talking with a doctor about some of these issues is hard, but I like to think things are getting better. Today’s new doctors are, in my opinion, much more comfortable and open when answering questions about sexual health. Although some questions may be niche, we physicians owe our patients respect and confidentiality as we are here to help them, not make judgments. Please find a doctor that you can discuss these questions with, so they can give you the best possibly recommendations.”

P.S. Good news, everybody! Just as I was wrapping up this column, CC responded to my email asking if he would reconsider and allow me to share his Twitter handle here. And he said yes! So, if there’s anyone out there who still thinks this letter is a fake, go have a look at @zoesixxx on Twitter. Be warned: you’ll never order the chowder again.