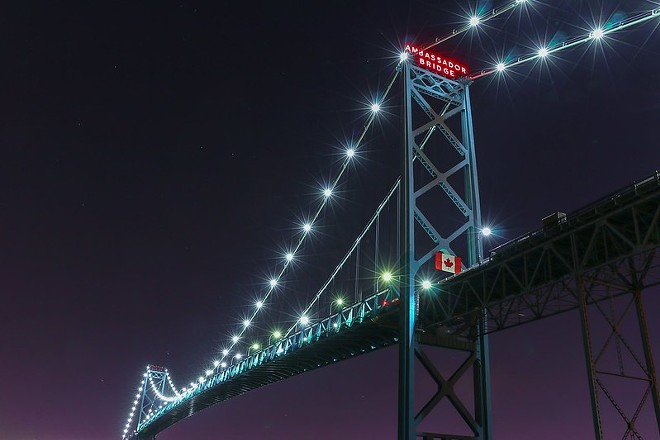 As Canadian truckers continue to clog key routes between Canada and the U.S., including the Ambassador Bridge, the growing protests over vaccine mandates are creating chaos for U.S. businesses and workers.

The blockades are disrupting supply chains, especially for the auto industry, which has cut shifts and even shut down plants.

The partial shutdown of the Ambassador Bridge is especially concerning because it’s where more than one quarter of all trade between the U.S. and Canada occurs. Thousands of trucks use the bridge every day, and many are hauling automative parts and finished vehicles.

Protesters also have disrupted traffic at the Blue Water Bridge, which connects Sarnia to Port Huron, causing delays of more than four hours.

Michigan Gov. Gretchen Whitmer on Thursday called on Canadian officials to reopen traffic on the bridge.

“My message is simple: reopen traffic on the bridge,” Whitmer said in a statement. “The blockade is having a significant impact on Michigan’s working families who are just trying to do their jobs. Our communities and automative, manufacturing, and agricultural businesses are felling the effects. It’s hitting paychecks and production lines. That is unacceptable.”

General Motor Co.’s Lansing Delta Township plant have canceled the first and second shifts. Two Ford Motor Company plants in Canada shut down, and production was reduced at another. And Stellantis temporarily halted production at the Chrysler Pacifica minivan plant in Windsor.

The situation is expected to worsen if the protests continue for a fifth day on Friday.

“These protests are not only impacting traffic — they are also impacting our auto industry, livelihoods of workers whose shifts are being shortened or cut, and the health and safety of my residents in SW Detroit who live close to the Ambassador Bridge,” Michigan state Sen. Stephanie Chang, D-Detroit, tweeted Thursday.

Some Michigan authorities are questioning why Canadian officials have allowed the protests to carry on for so long, with so much at stake.

“If the Ambassador Bridge was an Enbridge pipeline and the anti-vax truckers were water conservationists, (Canadian Prime Minister Justin) Trudeau would have had everyone arrested days ago and the Republicans would be cheering him on for doing so,” Michigan Attorney General Dana Nessel tweeted Wednesday. “I have seen motorists stuck in traffic on the bridge ticketed and arrested for leaving their vehicles because they needed to use the bathroom. How on earth are anti-vaxxers exempt from laws all others must obey?”

The hands-off approach to the disruptive protests are in stark contrast to how cities across the U.S. handled Black Lives Matter rallies. In Detroit, peaceful protesters in the summer of 2021 were tear-gassed, shot with rubber bullets, thrown to the ground, and in some cases, punched and kicked, leading to police brutality lawsuits.

“How is it that when BLM folks protested in cities last year, cops were ready lickety-split with riot gear but when a rightwing protest shuts down a major national point of entry, there’s nothing that can be done?” former journalist Gary Ridley tweeted.

Canada has some of the most stringent pandemic restrictions in the developed world, with some provincial governments imposing curfews, shuttering restaurants, bars and gyms, and banning indoor gatherings. Canada also imposed vaccination mandates for federal public workers and employees in the airline and railway industries.

“The only acceptable resolution is ending all COVID mandates on both sides of the bridge,” John James, a Republican candidate for Congress, tweeted.
© 2022 Cleveland Scene