Speaking in Advance of Sunday's Show at Rocket Mortgage FieldHouse, TOOL Drummer Hints New Music Might Be in the Works 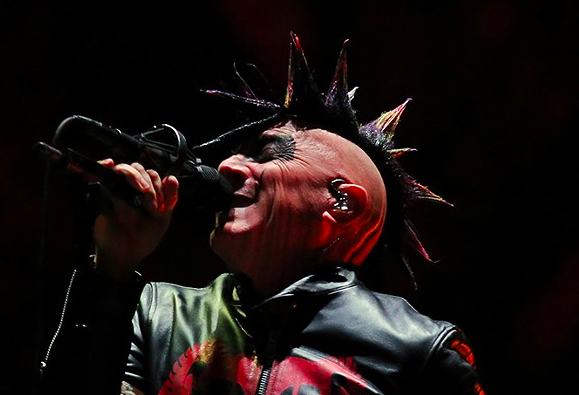 Chad Cochran
TOOL performing at Rocket Mortgage FieldHouse in 2019.
If you can judge a musician by the musical company he keeps, then TOOL drummer Danny Carey ranks with the best of them. He not only has a day job with one of the most consistently inventive hard rock acts on the planet, but he’s also traded licks with some of rock’s finest players. Carey says he has fond memories of jamming with Stewart Copeland (the Police) and the late Neil Peart (Rush), two of rock’s most accomplished drummers.

“Me and Neil Peart used to go up to Stewart Copeland’s house to get together for these jams,” he recalls in a recent phone interview from an Omaha tour stop. TOOL brings its tour in support of 2019’s Fear Inoculum back to Rocket Mortgage FieldHouse at 7:30 p.m. on Sunday at Rocket Mortgage FieldHouse. “It was a fantastic time. We did that ten or so years ago and would do it every couple of years. It was a blast. It was a good drummer hang, that’s for sure.”

While in high school, Carey played in the school orchestra and a big band. He also listened to jazz.

But he was a rock fan too.

“I always loved drums,” he says. “When I got my first drum set, I put on [Led Zeppelin’s] Physical Graffiti and learned every beat. I was taught by [Zeppelin drummer] John Bonham as much as by anyone. I also grew up listening to jazz fusion, and I thought that would be good for technique, and it did help I’m sure.”

When tours came to a standstill in 2020 because of the pandemic, Carey spent time jamming at the Baked Potato, an L.A. jazz club. While that helped him keep his chops up, it didn’t exactly prep him for the strenuous work involved in playing with TOOL.

After a short adjustment period, Carey says he’s back in the kind of form that fans know and love.

“With TOOL, this is the first time we’ve played together for almost two years,” he says. “There was a conditioning period. The blisters have gone away, so it’s all good now. It feels great actually. We’re 30-plus shows in. It’s like a well-oiled machine again. It can do no wrong now.”

New visuals mean that this incarnation of the tour will be different than the one that rolled through town toward the end of 2019.

“The guys really worked hard on [the visuals and lighting],” says Carey. “It’s really great. Everyone is blown away by the show. That’s one of the things that I don’t get to see. I can’t look behind me [to see the visuals], but I can tell by the crowd’s faces. We try to mix it up as much as possible but we can only go so far because it’s a lot of preparation for the lighting, so we can’t just pull songs out of our asses at any given moment. We have four or five tunes that we shuffle around throughout the tour to keep it interesting for us and the crowds.”

Another thing that makes the show interesting for Carey is the fact that when the band returns from an intermission each night to play “Chocolate Chip Trip,” a tune that features an adventurous mix of percussion (including a gong!), he gets to experiment.

“I never know what I’m going to do each night, so it’s really fun to go up and start winging it to see whatever comes out that night,” Carey says of his approach to the track.

While Fear Inoculum is more than two years old now, the band has just released some new music, including an updated version of 1992’s “Opiate” that it’s dubbed “Opiate2.” Carey’s propulsive drumming distinguishes the new version that will be accompanied by a new music video directed by Dominic Hailstone to commemorate the EP's 30th anniversary.

“On tour, we’re not doing the full version of ‘Opiate2’ we just released because it’s really long,” says Carey. “And we want to give people more songs. We pulled out certain elements of it. [The new version] is more centered around the video. It’s almost like we edited the song to the picture. It has a twist to it. It has a little more improv going on in the middle. It’s a lot of fun to play. It has a little more energy. There is more electronic improvisation in the middle, but the basic framework is still there. We wanted to update it a bit. [Bassist] Justin [Chancellor] is on it too, which is nice. We did it in the same room at the same time at my space, which was kind of nice too. I just got my studio up and running. It made it a lot of fun. I got to break in my new toys.”

Carey says the group is also readying a live DVD that will be “a good mind blower for all the hardcore fans.”

Much was made of the 13 years between the band’s last studio album and Fear Inoculum. Carey says it’s not likely to be as long of a wait until TOOL returns with a new studio effort.

“It was frustrating not having new material to play, but that time really flew by quickly,” he says. “I guess that’s just the nature of life. It’s like when you have kids, and they’re grown up, and you go, ‘What happened?’ It took a long time, but we did a lot of touring and tried to grow in different ways and take a break from each other to keep things fresh. We also wanted to bring in outside influences, so we would have something new to say to each other musically. It all came together really well on this one. I’m sure it won’t take us this long for the next one. We even had some stuff left over from the last one that we’ll develop. We have head starts on three or four new songs.”

With songs such as “Fear Inoculum,” a track that begins with spine-tingling percussion and a gentle hum before the heavy guitars kick in, Fear Inoculum arguably represents the most nuanced record in TOOL’s catalog. Carey agrees the record's mood swings are more pronounced.

“The more emotional depth you can convey, the better,” says Carey when asked about the approach on the album. “We want to take people on a journey. That’s the goal. It’s more interesting to have the peaks and valleys and pretty scenery along the way. We try to stay true to the moment in whatever strange places we meet and let it happen. The way we write the songs comes from jam sessions that we piece together. It’s very organic. The songs just take a form of their own. We just nurture it along and try to do justice to the chemistry we have as a band and then off we go.”
© 2022 Cleveland Scene