Family Feuds Lead to a Bloodbath in 'Antigone' at the Cleveland Play House. 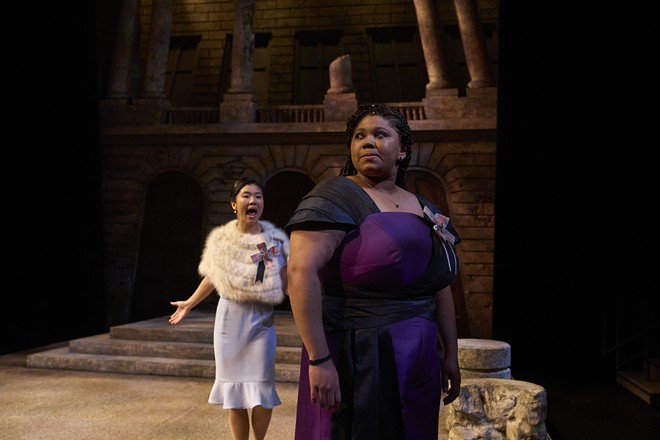 Photo by Roger Mastroianni
Bridget Kim as Ismene and Mariah Burks as Antigone in CPH's ANTIGONE.

Tolstoy once observed that happy families are all alike, but that every unhappy family in unhappy in its own way. Well, the ancient tragedian Sophocles beat him to that punch by a few eons when he created a family with more problems than a bucketful of Kardashians.

Sophocles wrote about that dysfunctional family in Antigone, way back around 440 BC (no, that doesn't stand for Before Covid). Since then, it has stood as a compelling examination of political versus religious ideals, made tangible in a family dust-up for the ages. And it is now igniting the Outcalt Theater stage at the Cleveland Play House.

The title character is the sister of Oedipus (yes, the one with mommy issues). She's a woman with firm religious beliefs of right and wrong and soon she's locked in a fierce showdown with her aunt Creon, King of Thebes (a gender-switch from the original). The battle Antigone wages and the price she and others pay is the riveting core of this "free" adaptation by Emily Mann.

The themes that have entranced audiences for centuries—including the debate over the superiority man's law or "God's law"—are laid out in clear and often intense fashion by the talented CPH cast under the sharp direction of Lauren Keating. This 80-minute drama, gives you all the conflict you could want, along with a surprising number of laughs considering the high stakes and a literally to-die-for ending.

In most productions of Antigone, Creon is played by a man, but in this instance the role is embodied by Vanessa Morosco, who channels a Cruella DeVil-ish vibe, dressed by costume designer Sara Ryung Clement in blood red, as Creon attempts to bully Antigone into doing her bidding. You see, Antigone wants to bury her brother Polynices, who was killed while attacking their hometown of Thebes. But he died in the battle, as did his brother Eteocles, who was fighting against Polynices to defend the city.

So, Antigone has two dead brothers to deal with, which is tragedy enough for most families, but not for this one. Creon is a no-shades-of-gray gal if there ever was one, and is happy to bury the heroic nephew Eteocles, but she orders that the other one, the traitor Polynices, must neither be mourned nor even buried, so he can just rot in the sun.

That enrages Antigone since she believes God wants all the dead to be treated with respect. But for Creon, her niece's rebellion is a sin punishable by death. This doesn't faze Antigone, who almost embraces her possible death as a validation of her devotion to God.

Creon is clued into Antigone's plans by a Guard (Sierra Grabowska), who delivers the message about Antigone's burial plans for Polynices—triggering laughter with her reluctant (let's make that scared shitless) appearance before the despotic ruler.

There are more juicy twists in the proceedings, as Antigone turns down her sister Ismene's offer of support, thinking that her sis just wants to steal some of her doomed-to-death glory. As for Creon, she is challenged by her son Haemon (Christopher B. Portley) who is engaged to Antigone because, you know, this clan doesn't have enough going on already. Even Creon's wife Eurydice (Laura Starnik) gets involved, trying to talk Creon down. In short, this is a family that might drive Dr. Phil into retirement.

The performances are uniformly excellent, with Mariah Burks exerting a quiet but compelling presence as Antigone, and Bridget Kim as Ismene orbiting effectively around Burks' strong gravitational pull.

The eventual carnage happens off stage, leaving the actors and the chorus free to continue their pro-and-con discussion about human vs. natural law and the upside of martyrdom.

If that sounds like heavy lifting for an audience it's not, thanks to Mann's adaptation that emphasizes the personalities as opposed to the heavy themes that could smother a less agile production.