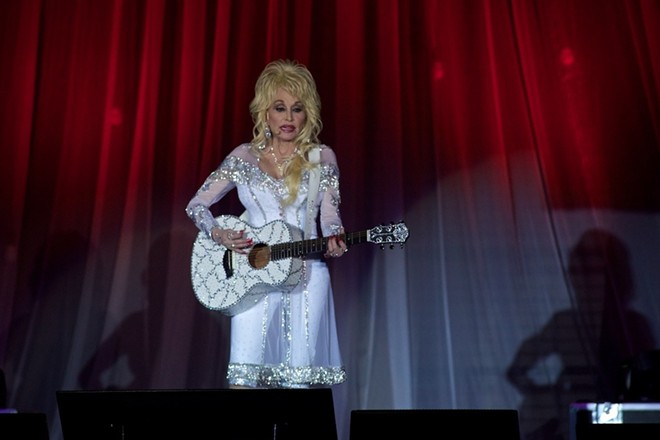 Scott Sandberg
Dolly Parton performing at Hard Rock Live in 2016.
Plenty of artists who get nominated and then inducted into the Rock Hall decline to show up for the induction ceremony simply because they don’t like awards ceremonies and/or have issues with the notion of a rock 'n' roll hall of fame.

Johnny Rotten famously called the Rock Hall a “piss stain” and declined to attend the Sex Pistols’ induction, and Axl Rose was a no-show when Guns N Roses were inducted.

“A hall of fame is a sports thing,” singer-songwriter Todd Rundgren said when we spoke to him back in 2019. “That’s when you haven’t played for 25 years, and then they put you in the hall of fame. Musicians don’t have to quit. They can play until they die. What’s the idea of suddenly saying you’ve crossed some threshold and are worthy of their fabulous institution? It’s like, ‘Wait a minute. I’m still playing here. You’re saying that my best years are behind me? Screw you!’”

Rundgren was inducted last year. Needless to say, he refused to attend the Induction Ceremony.

But to decline a nomination is something else entirely.

And yet, country singer Dolly Parton, one of this year’s nominations, just issued a statement that says she doesn’t feel she has “earned that right” to be inducted, though she feels “flattered and grateful.” Parton acknowledges that she’s always wanted to make a rock album and hints that if she ever follows through on that impulse, she might accept a nomination.

“This [nomination] has, however, inspired me to put out a hopefully great rock ’n’ roll album at some point in the future, which I have always wanted to do!” she says in a Tweet (full statement below). “My husband is a total rock ’n’ roll freak and has always encouraged me to do one. I wish all of the nominees good luck and thank you again for the compliment. Good luck!”

Given the way today’s country music crosses over into the realms of pop and rock, it seems likely that it’s only a matter of time before acts such as Shania Twain, Taylor Swift, Eric Church and the Chicks get considered for induction. But if that were to happen, the Rock Hall might want to go back and induct the likes of Willie Nelson, Patsy Cline, Merle Haggard, Loretta Lynn and Garth Brooks, who probably deserve to join country stars Hank Williams, Jimmy Rodgers and Johnny Cash as Rock Hall Inductees.