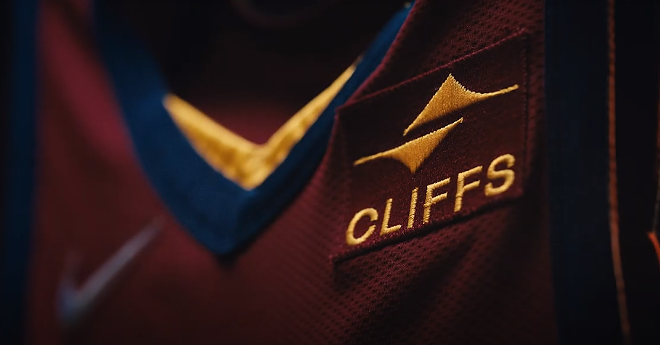 Screenshot / Youtube.com/clevelandcavaliers
Cliffs Patch
The Cleveland Cavaliers announced Tuesday afternoon that they had inked a modified multiyear sponsorship agreement with the local flat-rolled steel producer Cleveland-Cliffs that will include the company's logo on team uniforms. After five years with the Goodyear logo in the upper left-hand corner of the player jerseys, the Cavs will begin promoting Cliffs next season in the same spot.

Point guard Darius Garland appeared alongside a host of Cavs and Cliffs executives at the afternoon press conference. Much was made about his upbringing in Gary, Indiana, and the special resonance the team's so-called partnership with an industrial behemoth betokened.

"I will be very proud to wear the Cleveland-Cliffs logo on my jersey starting next season,” was the quote attributed to Garland in the press release. “Being from Gary, Indiana, I know first-hand how important Cliffs and steel are to communities, both here in Cleveland and across our region. Every time I put this jersey on and see the Cliffs patch on the chest, I’ll be reminded of these people and motivated by the hard-working mentality that they bring every day.”

Cliffs acquired Arcelor-Mittal in late 2020 and is now the 36th largest employer in Northeast Ohio, with roughly 2,400 local employees and 25,000 worldwide. With $5.3 billion in 2020 revenue, Cliffs is the 25th largest public company in the state of Ohio. Its CEO, Laurenco Goncalves, is the third-highest paid CEO as well, raking in more than $18 million in total compensation in 2020 (trailing only TransDigm's Kevin Stein and Parker Hannifin's Thomas Williams.)

"The Cavs stand out as a unique and authentic showcase for the importance of teamwork with its talented players, coaching staff and management team, coming together strategically to win," Goncalves opined in the press release. "Cleveland-Cliffs is no different."

Fingers crossed that, like Goodyear before them, Cliffs is content with an unobtrusive gold patch, (as teased in the promotional video). It's a minor matter indeed, given the deluge of visual branding that has come to dominate every available surface in pro sports, but the Cliffs' blue-green colorway totally clashes with the Cavs' wine and gold.