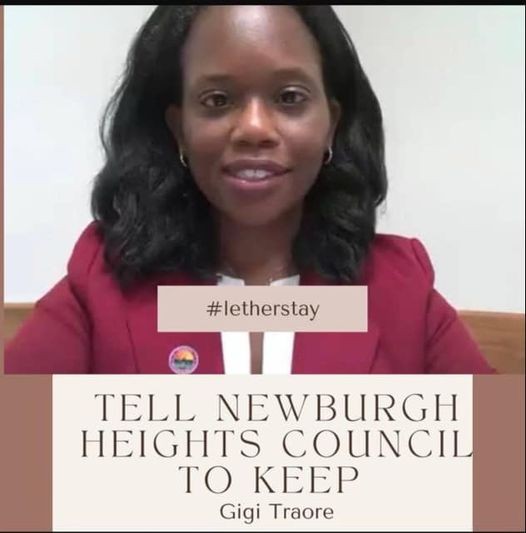 Newburgh Heights Village Councilwoman Gigi Traore will keep her position as the council's president pro tempore, which puts her in line to become mayor of the small Cleveland suburb when current Mayor Trevor Elkins resigns as part of a plea deal related to campaign finance charges.

Local politicians and area activists flooded a meeting of the Newburgh Heights Council Monday night when a rumor circulated on social media that the meeting had been called specifically to remove Traore as president pro tem, thereby jeopardizing her claim on the mayor's seat.

Village Councilman Bill Dunman denied to Channel 19 that the meeting had been called for that purpose. “The meeting was not called to take specific action or not take action," he said. "It was to give council an opportunity to hear Ms. Traore and to respond as a council, which we did."

In public remarks to her colleagues, Traore said that she was "hurt" by the last-minute meeting. Both she and the local elected leaders who gathered to support her assumed that the goal was to sideline her.

That was not the real reason the meeting was called, according to those with knowledge of the agenda, (although electing a new president pro tem was a possible outcome). Traore is in the midst of a civil dispute with her landlord in Newburgh Heights. And members of council, who had been apprised of those proceedings, reportedly wanted to get to the bottom of it before Thursday, when Elkins is expected to formally resign. They reportedly wanted to avoid a situation in which one mayor resigned and his successor moved out of the community in a short span. The council retired to a private executive session Monday to discuss the matter at length, and when they emerged, they appeared to have reached an understanding.

Congressional candidate Nina Turner attended the meeting, and Scene caught up with her by phone while council was in executive session.

"Gigi Traore is the only black woman on this council and would be the first black woman to serve as mayor," Turner said. "She has done an extraordinary job for her community."

Turner said that Traore had been a mentee of hers and that when she received a call from the councilwoman Monday afternoon, she came to the meeting as a show of solidarity, alongside other current and former black women elected leaders in Northeast Ohio, including State Rep Juanita Brent, former State Sen. Shirley Smith and Cuyahoga County Councilwoman Yvonne Conwell.

Smith also spoke to Scene by phone. She said that, like others, she attended to show support for Traore.

"She cares a lot about the people," Smith said. "Everywhere there are people who are deprived, she has worked to uplift them. She deserves to be mayor."

Mayor Elkins is likely to resign Thursday as part of a guilty plea. His misdemeanor charges concern the improper siphoning of campaign funds for personal use.  Elkins will avoid jail time as part of the deal but must resign as Mayor of Newburgh Heights and pay a small fine. He will also agree not to run for office in Cuyahoga County from 2024-2028.

Elkins was a supporter of Traore's when she was first appointed to council. When reached by phone, he confirmed that he had not called the council meeting. He spoke highly of Traore as an elected leader.

"I am thrilled that Gigi is on council, and we've had a long positive working relationship," he said. "I'm confident that she'll do a good job as mayor."

Traore spoke with Scene Tuesday and said that she believes the overwhelming presence of political and community leaders Monday night was an important factor in council's ultimate decision. She also confirmed the nature of the executive session without going into details.

"We had to clarify some things and hash some things out," she said. "But we came out with an understanding that a system of trust and communication would be in place and that we would hold each other accountable to ourselves and the residents of Newburgh Heights."

Traore said that as the only black woman on council, she had come to expect uneasiness about her leadership from certain quarters.

"There are dog whistles and nuanced things that you pick up on," she said. "You learn the code.  People are leery of change. And this is gonna be a change."