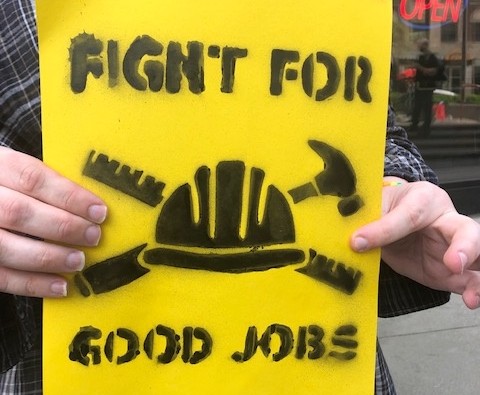 Baristas at local unionizing Starbucks stores joined workers' organizations, activists and allies in an annual celebration of workers in University Circle Sunday.  Before the late afternoon rain, a roster of speakers championed an array of local policy campaigns and drew connections between workers rights and social, environmental, reproductive and housing justice.

May 1 is International Workers Day, or May Day. It was launched in the late 19th century in conjunction with a campaign by the American Federation of Labor for an eight-hour workday and became an annual event in the United States after the Haymarket Affair in Chicago.

Sunday, speakers demonstrated that the struggle for workers' rights is ongoing. In Cleveland, as in other cities across the country, workers are fighting for the right to a livable wage, the right to a fair schedule, and — as exemplified by the local Starbucks workers — the right to unionize.

Aisia Jones, who ran for Cleveland City Council in 2021, spoke Sunday on behalf of the Northeast Ohio Worker Center. She publicized the ongoing Guardians for Fair Work campaign, a push for legislation at City Hall that would ensure the city of Cleveland only contracts with companies without wage theft violations.

Akshai Singh, a local Starbucks barista, spoke on the solidarity of labor movements domestically and abroad, and condemned the language of Starbucks CEO Howard Schultz, who recently characterized unionization efforts as "an assault" on the company.

Black Lives Matter Cleveland leader Kareem Henton remarked upon the vibrant intersectionality of the event's attendees and noted the prevalence of gender and racial pay disparities.

The event began and ended on the corner of Euclid Avenue and Ford Drive in University Circle, steps away from a Starbucks location where workers declared their intent to unionize earlier this year.

Recent unionization efforts at both Starbucks and Amazon were the joyful backdrop for this year's celebrations nationally. For the working class, unionization momentum at these mega corporations has been a force for hope after the massive upward transfer of wealth during the pandemic.

Those gathered Sunday marched down Euclid Avenue and through the institutions of University Circle, stopping intermittently as speakers touched on assorted topics: labor history,  sex work, reproductive justice, housing justice — "house keys, not handcuffs," chanted the marchers, after speaker Josiah Quarles noted how difficult it was to maintain a steady job without stable housing — and the ongoing grassroots campaign to oppose spending upwards of $550 million to construct a new county jail on a toxic site.