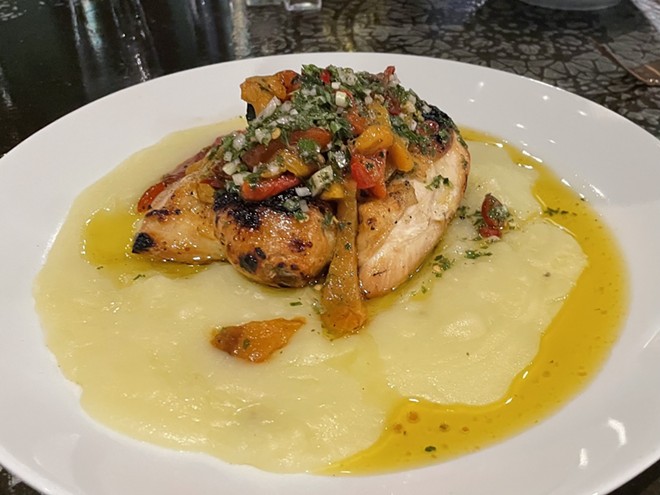 Ask a resident of Solon where he or she goes to eat when searching for a great meal and you’ll likely get responses like Chagrin Falls, Tremont, Ohio City, Hudson, Cleveland Heights… In place of hip, chef-driven bistros serving compelling and delicious foods, this far-flung suburb subsists on a steady diet of bland national chains, repetitive regional chains and cozy but predictable local haunts.

Few people are more acutely aware of that reality than Solon-based restaurateurs Izzy Schachner and Jay Leitson. As co-owners of the popular 56 Kitchen and new-but-notable fast-casual fried chicken spot Birdigo, the pair likely has a better handle on the local clientele than most.

“The complaint we constantly hear is that people have to leave Solon to have a nice night out,” Schachner told Scene. “There are places around here, but they are not in Solon.”

After surveying the landscape, the team decided to swing for the bleachers by opening Elle, a restaurant that aims to keep discerning locals closer to home. The bistro, which welcomed its first guests in December, is most certainly on the right track. But if its owners hope not only to appeal to neighbors but also generate some reverse migration from further afield, they’ll have to tighten up their game.

The space the owners selected for Elle was an appropriate one. For many years, this building was home to Harvest, Solon’s most recent attempt at finer dining. The freshly renovated interior offers a clear demarcation between past and present, with seemingly every inch of the space revised in some fashion. Lush fabrics, sparkly chandeliers and handsome furniture combine to create an eclectic, bohemian and inviting dining room and bar.

Like the setting, the menu is duly of-the-moment, with trendy foodstuffs like burrata, octopus, lamb meatballs and whole bronzini paired with equally chic, global accompaniments like espelette cream, harissa, ricotta salata, preserved lemon and bagna cauda. It’s a menu that foodies, for lack of a better word, truly can get excited about. Diners can expect core items to stick around but should expect frequent seasonal tweaks.

At the gentle urging of our server, who touted the dish as “charred and right off the grill,” we ordered the octopus appetizer ($12). Perhaps she was referring to the shishito peppers, which indeed were beautifully blistered, but the octopus, while tender and mild, would have greatly benefited from some flames. A trio of golf ball-size eggplant fritters ($12) arrive perfectly crisp, with a hot, creamy core that goes great with a pepper-spiked aioli. They’re capped with a bright punch of salsa verde. A half dozen roasted oysters ($15) were doomed from the jump by an onslaught of cold tomato vinaigrette, which literally filled the half shells and turned the oysters from hot to lukewarm.

There were no issues whatsoever with the ricotta gnocchi ($26), a season-appropriate composition of well-browned dumplings, savory braised lamb, wilted greens and plump favas. Fish fans who aren’t afraid of a little work should order the bronzini ($32). The meaty, sweet flesh separates easily from the spine and there are almost no small bones to worry about. Unlike that octopus, a wood-roasted chicken ($26) is cooked to a heavenly chestnut brown, with leopard-spotted skin wrapping juicy meat. I’m not sure what the olive oil whipped potatoes were supposed to look like, but by the time they got to my table they had separated, melted and wept to the outer rim of the plate.

After sampling a couple of the wines by the glass we opted to go with a bottle because we detected some age on more than one of the opened selections. The bottle list is short but populated by plenty of appealing choices. We landed on a lovely Nebbiolo ($60) from Piedmont that paired perfectly with the wood-fired meats. A crisp, pleasantly sharp and perfectly balanced negroni ($16) offers proof that the bar knows its way around a jigger and a spoon.

Given the abridgement of menus taking place lately, it’s refreshing to see one that reverses the trend. Diners here enjoy more than a dozen different entrée choices – plus daily features – that are sure to satisfy omnivores and pescatarians without offending the vegetarians. I’m looking forward to following the menu’s seasonal journey through the farmers’ markets and global pantry.

It won’t take much tinkering to transform Elle from a good restaurant to a great one. Already, she’s one of the most exciting new developments to happen to the Solon food scene in a decade.