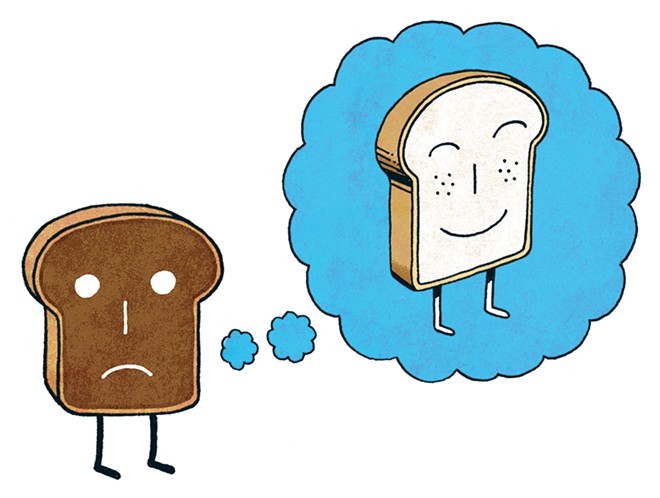 I’m taking a week off, so this week’s “Savage Love” is a reprint of a column that was originally published on Jan. 13, 2016. I hope everyone has a happy and safe Pride. Please be careful out there. —Dan

As a queer man of color — I'm Asian — I feel wounded whenever I am exposed to gay men in New York City, Toronto, or any city where white gay men dominate. Gay men, mostly whites and Asians, reject me because of my race and no one admits to their sexual racism. I understand that sexual attraction is subconscious for many people. But it is unfair for a gay Asian like myself to be constantly marginalized and rejected. I fight for gay rights, too. I believe in equality, too. I had the same pain of being gay in high school and the same fears when coming out, too. Why is there no acceptance, no space, no welcome for me in this white-painted gay community? I'm six-foot-one, 160 pounds, fit, and very good-looking. What can I do? I might as well be a sexless monk.

"I relate to a lot of what EDDIE is feeling here," said Joel Kim Booster, a Brooklyn-based writer and comedian. "The double-edged sword of living in a city with a large gay community is that the community gets so large that we finally have the opportunity to marginalize people within it."

Chu feels there's plenty of blame to go around for this sad state of affairs. "It's the gay media," said Chu. "It's Hollywood. Even with all the LGBT characters we have on TV now, what images do we have of Asian American ones? It's that LGBT-rights organizations still haven't diversified enough, especially in their leadership. And it's all of us, when we're lazy and don't confront our own prejudices."

Booster and Chu are right: Racism is a problem in the gay community, some people within are unfairly and cruelly marginalized, and we all need to confront our own prejudices.

"As a stereotypically short Chinese guy, my first reaction to reading EDDIE's letter? Damn, he's six-foot-one! I'm jealous," said Chu. "And that's also part of the problem. I, like many others, have internalized an ideal: tall, gym-perfected, blah blah blah — and, above all, white."

Booster was also struck by your stats. "It's hard for me to wrap my head around any six-foot-one, fit, VGL guy having trouble getting laid," said Booster. "On paper, this is the gay ideal! I don't really consider myself any of those things — and I have a perfectly respectable amount of sex."

Booster, who somehow manages to have plenty of sex in New York's “white-painted gay community,” had some practical tips for you. "EDDIE should stay away from the apps if the experience becomes too negative," Booster said. "If logging on to a hookup app bums him out, take a break. Being a double minority can be isolating, but living in a big city can be great. There are meet-ups and clubs and activities for all stripes. Join a gay volleyball league — truly where gay Asian men thrive — or find one of the many gay Asian nights at one of the gay bars around the city. They're out there."

Chu has also managed to find romantic success in New York. "I've been where EDDIE is, except shorter, less fit, and less good-looking, and somehow I found a husband," said Chu. "The monastery wasn't my calling, and I suspect it's not EDDIE's either."

A quick word to gay white men: It's fine to have "preferences." But we need to examine our preferences and give some thought to the cultural forces that may have shaped them. Do yourself the favor of making sure your preferences are actually yours, and not some limited and limiting racist “preference” pounded into your head by TV, movies, and porn. And while preferences are allowed (and gay men of color have them, too), there's no excuse for littering Grindr or Tinder or Recon — or your conversations in bars — with dehumanizing garbage like "no Asians," "no Blacks," "no femmes," "no fatties," etc. (But “no Republicans” is fine.)

The last word goes to Booster: "A note to the rice queens who will undoubtedly write in about this man: We like that you like us. But liking us solely because of our race can be uncomfortable at best, and creepy as hell at worst. In my experience, it's perfectly okay to keep some of those preferences behind the curtain while you get to know us a bit as humans first."

Follow Joel Kim Booster on Twitter @ihatejoelkim and be sure to watch his wonderful new movie Fire Island, streaming now on Hulu. Jeff Chu is the author of Does Jesus Really Love Me?: A Gay Christian's Pilgrimage in Search of God in America, follow him on Twitter @jeffchu.

I recently moved to the South, and on Grindr I’m noticing a lot more racist messaging in profiles, sometimes as overt as "no Blacks" and "no Asians." I’m wondering what I can (or should) do as a chat user? Is it sufficient just to block these people? Should I flag their profiles? Or should I message them and ask them to change their profile?

JMPGs pop up everywhere, of course, but they're thicker on the ground in more conservative areas. And while you can find examples of white gays in their 30s and 40s (and older) doing this kind of crap, it sometimes seems to be more prevalent among younger gay white men. These young guys — often recently out and from overwhelmingly white areas — get online and start saying dumb, racist shit. So long as they stay in Kansas or Utah, GEAR, they don’t get a lot of pushback. But once a JMPG moves to Chicago or Los Angeles, they suddenly encounter pushback. Other gay men… reformed JMPGs or never-ever-were JMPGs… start to get in their faces about how unacceptable and harmful this shit is.

Decent gay men of all ages and races despair over this "just my preference" crap because it never seems to stop. But that's not true; it does stop. After gay people who know better (and are better) get in the face of a JMPG, his latent moral imagination can kick into gear. The JMPG starts to think about how it would feel to be on the receiving end of this shit, maybe he recalls the Golden Rule back from Sunday School, perhaps he makes a few non-white friends and listens to them. Maybe he even starts to question his own precious preferences. (Are they his actual preferences? Or did he mindlessly adopt preferences assigned to him by Hollywood and porn?) And then maybe — hopefully, ideally — he stops being a JMPG. Even if he figures out that, yes, he's primarily attracted to other white guys, he realizes he can act on his preferences — he can fuck the guys he wants to fuck — without needlessly disparaging anyone along the way.

What happens next... well, what happens next is kinda depressing. Another young and/or dumb JMPG moves to town and the whole someone-needs-to-get-in-his-face process starts up all over again. So, when you see a JMPG with “no Blacks” or “no Asians” or “no fats” or “no femmes” in their profile, GEAR, push back. Tell him he’s being an asshole. Getting through to JMPGs is slow, one-dude-at-at-time work, but you can be part of the solution.