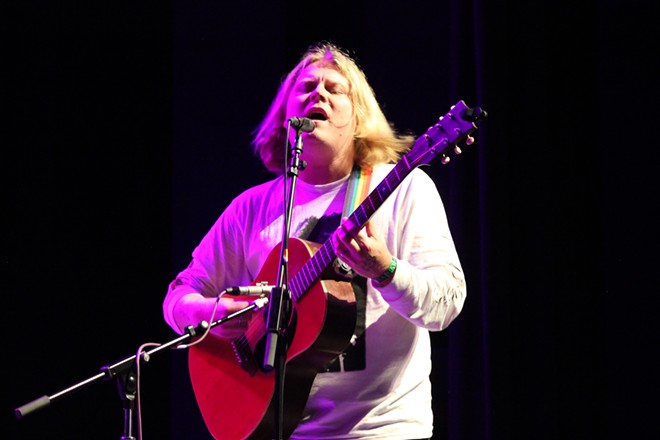 Ty Segall fans got a little bit of everything at Thursday’s concert at The Agora.

He played the melodic acoustic ditties, the feedback freakouts and scuzzy garage punk rave-ups. He and his band also did a lot of jamming and noodling, some of which felt aimless.

It all added up to an alternately thrilling and frustrating show, feelings fueled by three years of anticipation built up in this reviewer’s head. Thursday’s concert was the first time Segall returned to Cleveland since performing with fellow psychedelic traveler White Fence at the Beachland Ballroom in 2019. (A planned 2020 show was scuttled due to COVID-19.)

Since then, the prolific artist has — as is his way — put out numerous releases under his own name and various other projects, and is now touring behind next month’s largely acoustic album Hello Hi.

Bringing the backing Freedom Band with him, he played several new songs in Cleveland, alongside tunes from his past few albums. The stage setup was sparse — just instruments, amps and some microphones, with a few light designs that at times adorned a dark backdrop.

Musically, it was mostly very good. Segall and his backing band nailed every hairpin turn and genre change. Thundering drums, modulating electric guitar chords and screaming solos quickly gave way to dreamy interludes before the quintet brought it all to a crashing end.

The performance felt loose and as a result sacrificed some of the power and urgency heard on Segall’s excellent studio and live output. The band seemed small in the cavernous Agora. At times, the scuzz felt less like a necessity and more like a crutch, somewhere Segall could go where he knew he was safe.

It’s a shame, as his prolific output shows that he is just as effective without an amplifier.

And from a showmanship perspective, neither Segall nor his band brought much.
Positioned on stage left, he sang into a microphone to his right. While acknowledging the audience several times, he rarely looked out. The rest of the band followed suit, content to play off and impress each other.

The show would have benefitted from a smaller room such as the Beachland, though then he couldn’t pack in as many people (The Agora, while not empty, was far from sold out).

Segall fared much better when he forewent the feedback and stuck to the songs. “5 Ft. Tall” and “You Make the Sun Fry” benefited from brisk run-throughs.

He started the show alone on acoustic guitar, with second guitarist Emmett Kelly joining him not long after. The same went for the encore opener “My Lady’s on Fire.”With no waves of distortion to mask his voice, Segall let the melodies shine through.
After the song ended, though, his band returned for yet another noisy, sloppy jam.