Supposed costs of converting former Medical Mart into Convention Center balloon, due to "inflation" and "the supply chain." 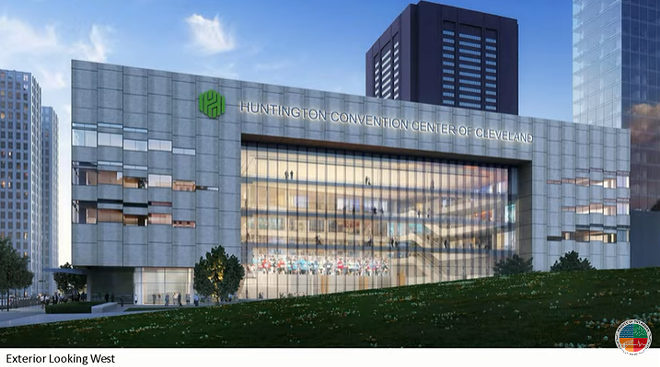 The price tag of a proposed overhaul at the Global Center for Health Innovation that nobody wants, which was initially ballparked at $46 million, has now leaped to $54 million, according to those with a vested professional and financial interest in the project.

A baffled Cuyahoga County Council labored to understand the vagaries of the proposed budget at a meeting Tuesday. Though most of their questions remained unanswered by meeting's end, they saw fit to move the legislation forward. They will likely pass it on a third reading next month and might as well do so while wearing giant foam middle fingers. Councilwomen Yvonne Conwell and Cheryl Stephens voted no on the allocation Tuesday, arguing that more time is needed to deliberate.

To be fair, others had reservations too, but that didn't stop them from siding with the convention and tourism industry and the county's own fiscal advisors, who persuaded them that an increased portion of the public's money must be spent as soon as possible, lest the county fall victim to rising interest rates.

County Council did take the courageous step of greenlighting only about $40 million of the total budget, $30.6 million of which the county will allocate via bond issue, and will pay back over the next 20 years in partnership with the Convention Facilities Development Corporation (CCCFDC). The county will also contribute $1.4 million from the Huntington Convention Center naming rights proceeds.

The CCCFDC will contribute $9 million from its reserves, which, as councilman Jack Schron noted, is simply money that the county has already paid to the CCCFDC — "It's all our money, directly or indirectly," Schron said. (Bingo!)

But the council elected only to authorize $8 million from its general fund, as opposed to the $13 million envisioned by CCCFDC attorney Jeff Applebaum and the county's fiscal officer Mike Chambers. The general fund contribution had ballooned from an initial $5 million ARPA designation, and Council was confused about why.

It came to light that this increase included $5 million for a proposed sky bridge between the Global Center and the Marriott, (a placeholder value, assuming that Marriott will contribute a portion of the total cost), and a $3 million surcharge due to "inflation" and "the supply chain" that everyone on council simply accepted at face value. Three million dollars! Sure! Sounds fair! (It is needless to note that there were no line items or even a general cost breakdown for the council members to peruse.)

Council held back the $5 million for the sky bridge and was no doubt impressed with their restraint. They said they would revisit that allocation once more information — like whether or not the city planning commission will even allow it — becomes available.

The whole meeting was astonishing to watch unfold, given the vehemence with which the public opposes the spending and the multitude of ways the taxpayer booty could be more effectively deployed.


If you asked the public if they'd rather pay $34 million (+interest) to add escalators and increase the size of a ballroom at the Global Center for Health Innovation or DO LITERALLY ANYTHING ELSE, they would overwhelmingly (unanimously?) say literally anything else. https://t.co/p3A6Duq2v0

As is generally the case in the poorest big city in the United States, the argument for converting the Global Center into a formal component of the Huntington Convention Center, (thereby making the convention center bigger, fancier, and more flexible), was made on the grounds of regional competitiveness and economic impact.  Destination Cleveland's David Gilbert said the enhancements would put Cleveland in the "middle of the pack" for convention business and suggested that every year enhancements aren't made, Cleveland falls further behind.

That argument would seem to be defeated by Destination Cleveland's own numbers. Gilbert proudly reported that travel and tourism is one of only two consistently growing industries in Cleveland (the other being healthcare) and has in fact increased each of the last nine years, relative to state and national averages, in terms of number of visitors.

(We note dryly that the industry's miraculous resilience has occurred in spite of the lack of multi-million dollar enhancements at the Global Center. )

The arguments for the enhancements themselves were even more absurd. During multiple rounds of questioning, Councilwoman Nan Baker kept trying to understand why the junior ballroom needs to be expanded from 10,000 square feet to 20,000 square feet, for example. The Global Center already has a 30,000 square-foot ballroom, the largest in downtown Cleveland, which can be subdivided into three smaller ballrooms. Was there really a market for a 20,000 square-foot space?

So the county is preparing to spend millions of dollars to build a larger ballroom in order to ultimately create smaller ballrooms? Nan Baker asked, genuinely confused.

Yes, she was told. This is what the industry demands.

One's head spins. Like why not just add a few more dividers in the big ballroom and save yourself 20 million dollars or so?

Alas. The budget additionally contemplates new escalators and stairways in the main atrium, and a revamp to the meeting room layout on the second and third floors. An outdoor terrace space would be created on the rooftop of the expanded ballroom. Talk about a scenic cocktail hour! 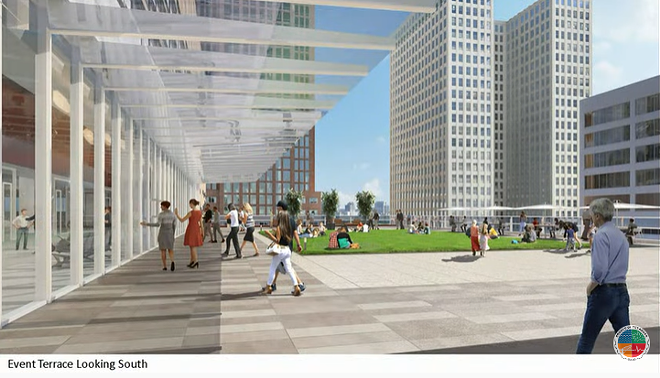 In spite of all this, the wildest moment of Tuesday's meeting — putting the arguments for the sky bridge aside — was when Gilbert noted with a straight face that converting the Global Center into the Huntington Convention Center was "cost-effective."

That's right. The now $54 million project, which is bitterly opposed by the majority of an impoverished public, is "cost-effective" when compared to the cost of constructing a new convention center / convention center annex, which Gilbert pegged at between $150-$200 million.

The chutzpah to make this argument! Residents will recognize that this is the identical line trotted out by the pro sports teams and their chamber-of-commerce attaches when they're selling local legislators on costly renovations to the stadiums — it's a hell of a lot cheaper than building a new one! — but it's especially specious here.

The alternative is not, nor was it ever, on the table.  The project's proponents can barely articulate why the enhancements are a value-add — More modular space? Are they serious? — and in any case, there is no threat of any negative outcome whatsoever if these enhancements are not made. Recall that some of the biggest conventions in the country, including the so-called Super Bowl of Conventions, are coming to Cleveland in the next few years and made plans to do so without any knowledge of the Global Center overhaul.

These bozos and their imaginary numbers should have been laughed out of the room.