Only 10% of Cuyahoga County voters showed up at the polls 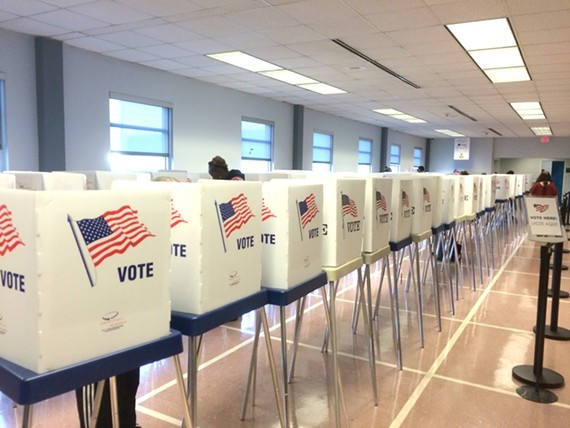 Just over 10% of registered voters in Cuyahoga County cast ballots in Tuesday's primary election, a dismal but predictable turnout for the state's second such election. In a county with more than 1.2 million people and 874,000 registered voters, only 90,000 showed up at the polls.

That limited number chose the Democrats and Republicans who will theoretically represent them in the Ohio House of Representatives and the Ohio Senate, in the illegal new districts that the Republican redistricting commission produced. Also on the ballot were largely ceremonial races for the Central Committee of the state Republican and Democratic parties.

Few of the statehouse races had much drama, as incumbents largely squared off against lesser known challengers, or candidates ran unopposed.

The only race, locally, featuring two incumbents was the state rep. race in the new House District, 16, which includes the western suburbs of Bay Village, Westlake, North Olmsted, Olmsted Falls and Berea.

There, Bride Sweeney, the daughter of county councilman Marty Sweeney, defeated grassroots candidate Monique Smith by a 56-44 margin. Neither candidate lived in the new district as of earlier this year, but Smith represented about 70% of the constituents in the old HD16. In fact, Smith was the only statehouse candidate to flip a district from red to blue in 2020. She now loses the seat she and a volunteer army worked to wrest from Republican Dave Greenspan two years ago.


Congratulations to Rep. Sweeney on her win tonight. I will stand behind her as she faces the Republican opponent in our district in November, and we WILL keep our district blue.

The only other close-ish race was across town, in the new 21st Ohio Senate District. Kent Smith defeated John Barnes by a margin of 62-38 there. Smith was term-limited as a state rep and is popular with the electorate in the inner ring East Side suburbs, including Euclid, where he lives and served for many years on the school board. Smith, who recently came up short in his bid to become the Cuyahoga County Democratic Party Chair, can take some solace in crushing no less than Cuyahoga County Executive Armond Budish, plus a handful of others, to secure a seat on the state Democratic party's central committee.

Incumbent Terrence Upchurch handily defeated challenger Michael Seals in the 20th house district, which includes the majority of the city of Cleveland.  The victory for Upchurch is final, as there were no Republican candidates in the primary.

On the Republican side, the 14th House District (Parma, etc.) was the tightest contest. Jolene Austin narrowly defeated David J. Morgan there. She'll go up against Democrat Sean Brennan, the president of Parma City Council, in the general.