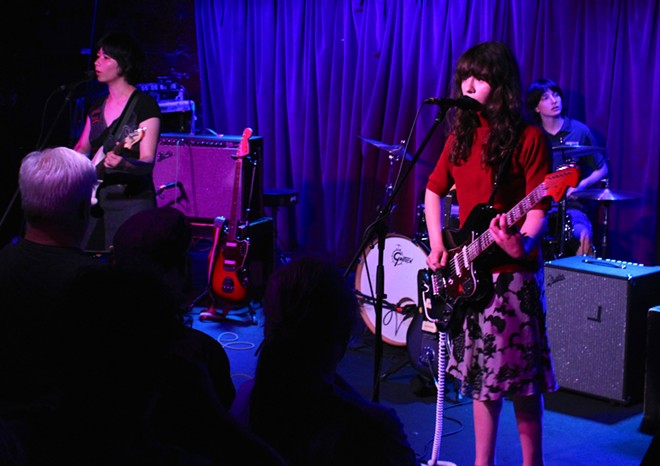 Chicago indie trio Horsegirl’s sound shows its mix of influences, but any attempt to try to list them would be a disservice to the band.

Yes, it’s possible to hear traces of 1990s shoegaze and noise rock a la My Bloody Valentine and Sonic Youth, along with a few artists so obscure I’m not sure I know who they are. But to focus on those may come at the expense of recognizing that the young band simply writes really good songs and is on its way to crafting a sound and personality of its own.

If Horsegirl is not there just yet, its show at the Grog Shop showed the trio will be in no time.

Stopping in the Cleveland area as part of its inaugural U.S. tour to support this year’s debut LP “Versions of Modern Performance," the trio — guitarists/vocalists Nora Cheng and Penelope Lowenstein, and drummer Gigi Reece — packed a lot of twists and turns into a confident 40-minute set.

There were the huge drums and exclamations of “dance” on “Anti-glory,” the feedback-drenched “Billy” and a dramatic breakdown in “Live and Ski.”

While the members appeared confident onstage, they also showed they were still figuring out their new lives on the road, with Lowenstein remarking that two of the members cut their bangs in the Grog Shop’s bathroom.

“These are the things you do on tour, I guess,” she joked.

But two of the best songs from Wednesday’s set do not even appear on its debut, evidence that the members realized they had something special from the get-go.
“Sea Life Sandwich Boy,” the b-side to a 2021 single, mixed a buoyant backbeat with one melodic guitar riff after another. And Lowenstein touted the spoken-word “Forecast” as the very first song Horsegirl recorded before warning the half-full crowd that it might sound rough because it was the first time the band played it this tour. That warning proved unnecessary.

Horsegirl’s musical touchstones show a band that, while firmly in Gen Z, pull from a time far before its own. But like its influences, focusing on the members’ ages would be a mistake. While few budding bands are fully formed out of the gate, Horsegirl is already far ahead of the pack. The members are still figuring some of it out, and Wednesday’s show left me excited to see what’s next.

Openers Dummy put on a set that was nearly as strong as the headliners. Mixing 70s krautrock (think electronic music but a bit slower and played with real instruments), dreamy vocals and the occasional burst of noise, the band augmented its thrilling songs by projecting psychedelic imagery behind it to great effect.
© 2022 Cleveland Scene