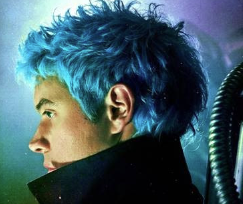 Gina Gizella Manning
Nick Wold.
Growing up in Seattle during the ’90s, Dreamers singer-guitarist Nick Wold absorbed plenty of the grunge music that put the Northwestern city on the musical map.

“My sister was older and in high school and showed me Nirvana and Soundgarden and all the grunge stuff,” he says in a recent phone interview from his Los Angeles home. Dreamers perform with the Score at 6:30 p.m. on Tuesday, Sept. 6, at House of Blues. “My parents listened to bands like Beatles and Crosby, Stills and Nash at home. That’s the musical soup that I grew out of. I think there’s a direct lineage from the Beatles to Nirvana, and Kurt Cobain used to talk about that. I think Kurt liked John Lennon more than Paul McCartney.”

After college, Wold had the chance to put his songwriting skills to the test with his band Motive. Working as a bartender at the time, Wold even took the band on a couple of “scrappy” tours. When that band dissolved, he found that he could save money if he lived in his practice space. Living there gave him the opportunity to focus on writing music.

“I started writing a ton of music at that time,” he says. “I didn’t even know what it would be.”

Things progressed after he met bassist Nelson through his previous manager. They’d form Dreamers and self-release “Wolves (You Got Me),” a catchy, Strokes-like number that received some significant airplay on Alt-Nation, a Sirius Radio channel.

“It kicked things off,” says Wold when asked about the tune. “I was like, ‘Finally.’ I had written a lot of songs before that that got zero attention at all. It’s a very personal song that I still love to play now. It’s very random what people react to and what hits. It’s time and place and a little bit of luck. You have to keep doing stuff until you get one of those and then strike when the iron’s hot.”

The group moved to Los Angeles since that’s where its label was based. The group also hopped onto a tour opening for a Stone Temple Pilots that featured the late Chester Bennington subbing for original STP singer Scott Weiland.

“That tour was great, and the whole band was so nice to us even though we didn’t have anything going for us at the time,” says Wold. “Chester saw us slumming it because our van broke down and I borrowed my dad’s Volvo. He asked where we were sleeping and we told him that we were crashing at friend’s houses or in the van. He bought us hotel rooms out of his own pocket. That’s crazy. No one does that.”

After two EPs, Dreamers finally recorded a full-length record, This Album Does Not Exist, in 2016.

“At that point, we felt like we had been around the block and were ready to do an album,” says Wold.

Non-stop touring ensued, and the experiences the band had on the road informed the songs on 2019’s Launch Fly Land.

“[Launch Fly Land] is about the journeys we go through in life,” says Wold. “It was our first landing. We even recorded it with our live sound guy, who was with us on the road. It was just us and just our guys at his house.”

Last year, the band teamed up with Outkast’s Big Boi and up-and-coming singer UPSAHL for “Palm Reader,” a tune that draws from reggae, rock and hip-hop.

“That was an amazing moment,” says Wold. “My favorite hip-hop group was OutKast. They were so smart and nerdy. My manager had sent him songs over the years. He had never wanted to do it. Somehow, he wanted to do this one. I was like, ‘Fuck yeah! Let’s go.’ He took it to a new level with his verse about how advertisers are trying to steal your brain. In Big Boi fashion, he elevated the content. Upsahl is this total star. I had been writing a bunch of songs with her. That was the dream team. And to me, it’s the reggae sound like what the Clash was doing in the ’70s. It’s like the punk rock version of reggae.”

Grounded by the pandemic and unable to tour at the same relentless pace, the band spent the last two years writing more material. Earlier this year, it issued its latest single, the hard rock “Black Confetti,” a song that Wold says represents the direction of the new material that’s yet to be released.

“I think more and more, I’m going back to my roots of making rock music after I was into a synth wave thing,” he says. “Wherever I ended up musically, I end up falling back to the instinct of wanting to make rock again.”

Wold says the shutdown from the pandemic also enabled him to pursue other things.

“That was the first time we got to take a breath,” he says. “I set up my own studio to create a lot of stuff. We never had time to do that before. It worked out. We would have never taken a break if it weren’t for a world-wide catastrophe. I got more into producing and I learned coding and I’m making a video game and writing techno opera songs.”

The upcoming tour with the Score represents the band’s first major trek since 2020, and Wold says he’ll use the shows to test out new material.

“I’m super ready,” he says. “We have done some festivals but this is the first actual tour [in a couple of years], and we have all this new music. I’m excited to see if all the people who listened to us before are still out there, and if we can still do it the way we used to. It’s a new world out there.”
© 2022 Cleveland Scene