The administration had a hands-on role in getting HB6 passed 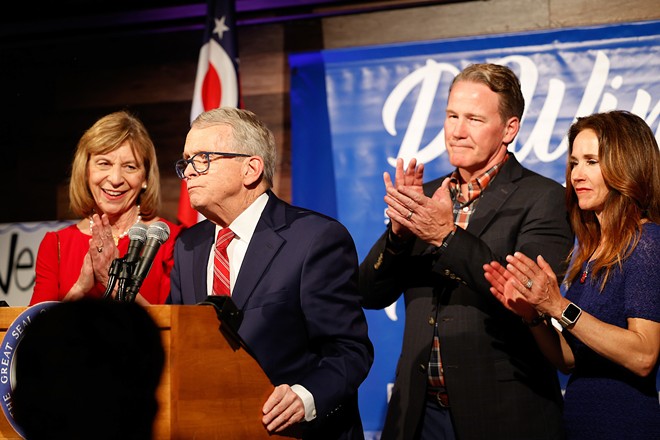 Gov. Mike DeWine and his administration played a hands-on role passing an allegedly pay-for-play nuclear bailout and appointing an industry-friendly regulator who has since been accused of taking a $4.3 million bribe, documents messages show.

Calendar records show DeWine, a Republican, met repeatedly to discuss energy policy with FirstEnergy Corp. officials and at least once with GOP House Speaker Larry Householder, who has been criminally accused of taking a separate, multimillion-dollar bribe from the company to pass the bailout.

Despite a cautionary letter from environmental groups and a 198-page dossier from his former campaign staffer warning against the move, DeWine appointed Sam Randazzo in 2019 to the head of the Public Utilities Commission of Ohio. FirstEnergy last summer admitted it paid Randazzo a $4.3 million bribe. Randazzo has not been charged with a crime and denies wrongdoing.

Newly released text messages show FirstEnergy executives describing an open line with the administration on the selection and inside support from Ohio’s chief executive.

In one text, FirstEnergy executive Mike Dowling credits DeWine and Lt. Gov. Jon Husted with performing “battlefield triage” to save Randazzo’s appointment before a key vote. Both DeWine and Husted have previously denied that a redacted version of the text message that appeared in criminal documents referred to them.

Federal prosecutors accused House Speaker Larry Householder of secretly controlling a nonprofit that took $60 million from FirstEnergy. He allegedly used the money to enrich himself personally and politically and to ensure the passage of House Bill 6, which provided a massive bailout to two nuclear plants owned at the time by FirstEnergy. Householder was charged with racketeering and awaits trial. Two alleged conspirators pleaded guilty.

FirstEnergy admitted last summer to the $60 million payment as well as a separate $4.3 million bribe to Randazzo just before he started as Ohio’s top utility regulator. The payment topped off $22 million in consulting fees to Randazzo since 2010 from the company.

Court documents from prosecutors reveal no focus on DeWine, who has not been charged with any crime. However, a review of records turned over in subpoenas, public records requests for his official calendars by the Energy and Policy Institute, text messages attached to regulatory filings, and others show DeWine and his staff repeatedly influencing and shepherding HB 6 into law.

On the campaign trail in July 2018, DeWine visited one of the nuclear plants that would receive a bailout, his official calendar shows. A month later, he met with FirstEnergy executives at their Akron headquarters. In October of that year, DeWine met with FirstEnergy at a fundraiser for Republican governors.

FirstEnergy contributed about $1 million in total to DeWine’s campaign, political organizations supporting it, and to another nonprofit supporting his daughter’s campaign for county prosecutor, according to the Dayton Daily News.

After winning a close race, DeWine, Husted, Jones and Dowling celebrated over dinner at The Athletic Club in Columbus. The next day, Jones sent Randazzo the text message (above) indicating they discussed the open PUCO seat.

In January of 2019, the FirstEnergy officials texted one another trying to fill not just one but two open PUCO seats, all the while mentioning phone calls with “DeWine guys” about it.

“That’s their plan but nothing certain until Sam’s [Randazzo’s] meeting [with DeWine],” Jones texted Dowling. “Four people in DeWine world, you, Sam, and I know about this.” The PUCO seats would eventually be filled by Randazzo with another commissioner renewed.

Dowling relayed to the other two men a message from Josh Rubin — DeWine’s 2018 campaign manager and a FirstEnergy lobbyist. He said once Randazzo takes office, DeWine will “lean on him on everything.”

Several texts focus on HB 6. The bill (and eventual law) would bail out FirstEnergy’s nuclear plants, subsidize two coal plants owned by other Ohio utility companies, and create a “decoupling” mechanism that effectively put ratepayers on the hook to guarantee certain revenue streams of FirstEnergy’s. Prosecutors estimate the bill as worth about $1.3 billion to the company.

Two days before the bill was introduced, DeWine’s calendar shows a slot for an “Energy Discussion” at the governor’s residence. Later that month, after the bill was repeatedly criticized during an opponent testimony hearing at the statehouse, DeWine, Husted, Randazzo and various staffers all met up at 9 p.m. for what the governor’s calendar calls a “Nuclear Bailout Bill Discussion.”

Over the next month, DeWine’s calendars show two entries for energy policy meetings, plus a call with Householder about HB 6, and another call on the bill.

“Sam, what do we know about whether nuclear plants need this boost?” DeWine, using his personal email, wrote to Randazzo. “One editorial suggested testimony was not conclusive.”

Dowling paid a visit to the governor’s residence the next day. Randazzo responded to DeWine’s email on June 11, casting doubt on the studies referenced in the editorials.

“Just had a long conversation with JHusted just now,” he said, going on to explain that Husted sought to extend the length of the bailout. “All is well.”

Court records contain another text from Jones stating that “State Official 2,” later confirmed to be Husted, joined with others in “fighting to the end” for a beefier bailout.

As the FBI made its first arrests, DeWine began a pattern of defending HB 6 on the merits and showing unflinching loyalty to his staffers, some of whom have ties to FirstEnergy.

Householder, his political strategist, a prominent GOP lobbyist, and two FirstEnergy lobbyists were arrested and charged with racketeering in connection with HB 6 on July 21, 2020. The next day, DeWine stood by the law he signed.

“Because people did bad things does not mean that the policy is not a good policy,” he said.

He reversed himself the next day and called for a repeal of the bill.

In October, FirstEnergy fired Jones, Dowling, and fellow executive Dennis Chack as it waged an internal investigation. The company fired another two executives days later “due to inaction and conduct that the Board determined was influenced by the improper tone at the top.”

At this point, the public remained unaware of the multimillion-dollar financial arrangement between the embattled FirstEnergy and Randazzo. However, on Nov. 16, 2020, FBI agents were seen raiding Randazzo’s condo and removing boxes of material from inside. The next day, FirstEnergy submitted a little-noticed securities filing outlining the $4.3 million payment.

“We have no indication he’s under investigation or he’s the target of an investigation. We’ll wait until we find additional facts,” he said in a Nov. 17, 2020 news conference. “Look, the FBI many times will indicate if someone is a target. They have not indicated he’s a target. I have no reason to think he’s a target. I don’t know. So, we’re waiting for additional information, quite candidly. I hired him. I think he’s a good person. If there is evidence to the contrary, then we’ll act accordingly, but not going to act without facts.”

Randazzo would resign three days after that statement.

Mid-summer 2021, FirstEnergy signed a deferred prosecution agreement with the U.S. Department of Justice. The company agreed to pay a $230 million penalty and cooperate with investigators to avert a charge of honest services wire fraud.

The agreement contained a lengthy set of facts from the company, stating it paid the $64 million in bribes in exchange for official action from Householder and Randazzo.

Days after the agreement was announced, DeWine held a press conference on anti-hazing legislation. Reporters asked questions afterward about the agreement, including a line that refers to “State Official 1” and “State Official 2” lobbying to ensure Randazzo’s appointment. DeWine said he’s “not aware” of anyone in his administration, including himself, appearing in the document. Husted, in a statement, said he too “does not believe” he’s referenced in the document.

Texts obtained by the Ohio Consumers’ Council and attached to a regulatory filing contain the unredacted version of the text, identifying DeWine and Husted by name.

DeWine hired McCarthy as his legislative director in 2019, around the time McCarthy stepped down from the organization’s board. In February 2021, after media reports identified McCarthy’s role with Partners for Progress, DeWine defended McCarthy.

“As far as I know, Dan McCarthy has been well-respected for many, many years, long before he started working for me as out legislative director, and I have faith in his integrity,” DeWine said.

The texts, he said, in fact show the lack of a role from DeWine and Husted within the scandal. He said prosecutors have not subpoenaed him or any of his employees.

“This all along has been a Larry Householder scandal and a FirstEnergy scandal,” he said.

When asked whether DeWine, a former prosecutor and attorney general, detected any sense of impropriety during all his contacts with Householder and FirstEnergy leading up to the passage of House Bill 6, he declined comment.

Husted offered a similar comment through a spokeswoman, stating that “there is nothing new here” in the texts, emails and meetings.

“This kind of advocacy is well within his responsibilities as a public official, and, as we know, the bill was ultimately passed with bipartisan support,” he said.