Encanto: The Sing Along Film Concert comes to Blossom and Doug Stanhope returns to Hilarities 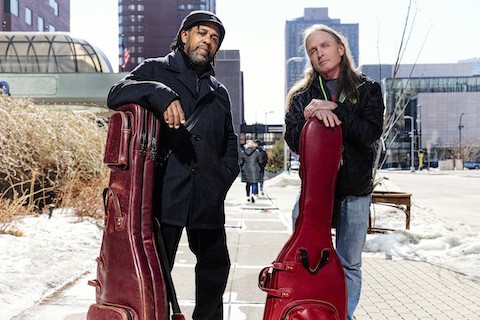 Steve Parke
Bass Extremes.
Our weekly picks of the best things to do in Cleveland this weekend. Also check out our full Cleveland event calendar.

Aaron Berg & Luis J. Gomez
The two comedians bring their Offend Everyone Tour to Hilarities tonight at 7. Gomez is known for The Legion of Skanks podcast and for creating the Skankfest comedy festival; Berg is best known for his popular podcast Berg’s Base. Check the venue's website for more info.
2035 East Fourth St., 216-241-7425, pickwickandfrolic.com.

CULTS
The New York duo of Madeline Follin and Brian Oblivion, aka Cults, comes to Mahall's 20 Lanes tonight at 9 in support of its acclaimed 2020 album Host. Cults made and released Host remotely, unable to tour until now. Written more collaboratively than ever before and recorded primarily with live instruments for the first time, Host marks the start of “a bold new chapter” for the band, which creates atmospheric, Cocteau Twins-inspired music.
13200 Madison Ave., Lakewood, 216-521-3280, mahalls20lanes.com.

Encanto: The Sing Along Film Concert
This event will feature a screening of the entire feature-length film and an on-stage band that'll play the hit songs from the soundtrack, which features eight original songs by songwriter/composer Lin-Manuel Miranda (Hamilton, Moana) with an original score by Academy Award-nominated composer Germaine Franco. The concert begins tonight at 7:30 at Blossom.
1145 W. Steels Corners Rd., Cuyahoga Falls, 216-231-1111, livenation.com.

Corinne Fisher
A stand-up comedian, writer, director and actor who recently directed the debut comedy special from her and her longtime comedy partner, Krystyna Hutchinson, Corinne Fisher comes to Hilarities this weekend for shows that take place at 7 and 9:30 tonight and tomorrow night.
2035 East Fourth St., 216-241-7425, pickwickandfrolic.com.

The Rocky Horror Picture Show
The Rocky Horror Picture Show, the 1975 film that still draws an exuberant, costumed crowd that likes to throw rice and dry toast and sing along to the songs in the movie, still draws big crowds to local showings. Expect a throng to show up for tonight's screening that takes place at 11:59 at the Kent Stage. The live shadow cast the School of Rocky will act out the movie. Tickets are $10, $7 if you come in costume.
175 E. Main St., Kent, 330-677-5005, kentstage.org.

Vanillaphase
Formed in 2020 when the pandemic brought live music to a standstill, the local four-piece electronic act Vanillaphase quickly began recording even though local clubs were shuttered. It released its debut EP, One Trick Pony, as well as the uptempo single, “Almost Supernova” in early 2021 and has kept busy ever since. The band gave a few livestreamed performances, the latest of which featured new lead singer, the cheekily named Generic Goth Girl. Vanillaphase plays a release party at 6 tonight at the Mercury Music Lounge in Lakewood.
18206 Detroit Ave., Lakewood.

We Ain’t Done Yet Wild N' Out Comedy Tour
Jay Lewis  is an American comedian, rapper, actor, dancer and singer best known for starring in shows such as Just Jordan, All That, and The Rickey Smiley Show. He has also appeared in films such as Yours, Mine, & Ours, Beauty Shop and Brotherly Love. He heads up this tour that lands at the Improv tonight at 7:30 and 10 and tomorrow night at 6:30 and 9. Check the club's website for ticket prices.
1148 Main Ave., 216-696-IMPROV, clevelandimprov.com.

SAT 08/27
Barton Center Annual Wine & Cheese Fundraiser
Enjoy unlimited wine by the glass, heavy hors d'oeuvres, music, raffle baskets and a "wine & spirits pull" (draw a number, get an expensive or cheap bottle) at this benefit for Barton Center. The event starts at 6 p.m. at Rozi's in Lakewood. There will also be a cash bar available as well as beer and wine for take home purchase. One of a kind Lakewood posters will be available for purchase. Must be fully vaccinated to attend.
14900 Detroit Ave., Lakewood, 216-221-1119, rozis.com.

Browns vs. Chicago Bears
The Browns conclude their short preseason with tonight's home game against the Chicago Bears. The game begins at 7 at FirstEnergy Stadium. Consult the team's website for more info.
100 Alfred Lerner Way, 440-891-5000, clevelandbrowns.com.

Cleveland Garlic Festival
Northeast Ohio is prime garlic-growing territory, so it makes perfect sense to honor the stinking rose with its very own festival. A fundraiser for the North Union Farmers' Markets, the Cleveland Garlic Festival features music, wine and beer vendors, food competitions, top chef grill-offs, and vendors peddling garlic-scented foods. The festival also rounds up many of the region's best garlic growers, making the fest the best place for wannabe garlic growers to purchase this year's planting stock. The event takes place today from noon to 8 p.m. and tomorrow from noon to 6 p.m. at Shaker Square.
clevelandgarlicfestival.org.

Legacy Live
One of Northeast Ohio's most popular free concert series, Legacy Live has become a tradition that families and couples look forward to each summer. The concerts, which take place on the Legacy Village lawn at 5 each Saturday night throughout the warmer months, feature local bands that play everything from blues to jazz and rock. Admission is free.
25333 Cedar Rd., Lyndhurst, 216-382-3871, legacy-village.com.

The Uncle Louie Variety Show
Comedians Carlo Russo and Lou Greco will make light of what it was like to grow up as an Italian in this live show that's touring the country. They do different acts as the lovable Uncle Louie and Pasqualino characters, and they also perform original music and do standup. Tonight's show starts at 8 at the Hanna Theatre. Tickets cost $35 to $65.
2067 East 14th St., 216-241-6000, playhousesquare.org.

Waterloo Arts Festival
The annual Waterloo Arts Festival serves to celebrate the Waterloo Arts & Entertainment District's appeal. This year's fest, which takes place from noon until 7 p.m. on Waterloo Road between East 161st Street and Calcutta Avenue, features more of the same mix of music, food and art that has made this into the neighborhood's signature event. More than 40 bands will perform and there will be food trucks and special art exhibits. Admission is free.
waterlooarts.org.

WCSB Presents Coleman Zurkowski's Music for No One
New York-based experimental composer Coleman Zurkowski. Mr. Zurkowski brings his international/nationwide tour of Music For No One to the Bop Stop today at 3 p.m. Music for No One is a concert-length work for piano, cello, saxophone, and vocalists. All funds collected at the door will be donated to the Bop Stop.
2920 Detroit Ave., 216-771-6551, themusicsettlement.org.

SUN 08/28
Funk It Up: A Celebration of Farmhouse Style Beer and Fermented Foods
Featuring more than 20 local representations of farmhouse styles, including saisons, sours, wheats, fruited beers and ciders, this event that takes place today at noon at Butcher and Brewer celebrates all things funky. In addition to the libations, there will be funky and fermented foods like charcuterie, artisan cheeses, pickled veggies, sourdoughs and more. Check the website for ticket prices.
2043 East Fourth Street, 216-331-0805, butcherandthebrewer.com.

One World Day
Since 1945, the Cleveland Cultural Gardens Federation (CCGF) has celebrated One World Day, and while the pandemic forced the cancellation of last year’s event, One World Day in the Cleveland Cultural Gardens returns today from 11 a.m. to 6 p.m. throughout the Gardens on both East and MLK Boulevards. The event will feature ethnic performances, food and cultural activities in the 30+ Cultural Gardens. There will be special performances from the Singing Angels and Brazilian Jazz artist Moises Borges. Other One World Day highlights will also return, including the moving Naturalization Ceremony and the popular Parade of Flags. The Parade of Flags has grown into a large and colorful display of the numerous heritages represented in the Gardens and the broader Cleveland community. The event takes place from 11 a.m. to 6 p.m. Admission is free.
1051 Martin Luther King Dr., 216-220-3075, clevelandculturalgardens.org.

Doug Stanhope
You might know comedian Doug Stanhope as Eddie from Louis CK’s show Louie. His real standup isn’t too far from that character — he basically likes to stand around and get drunk and talk. He also gets pretty graphic about some of the stories he tells, but it’s pretty damn funny. Like the one time a crackhead transvestite hooker let herself into his car. Yeah, we’ll just leave it at that. His humor ranges from brutally honest observations on society to diatribes about why he hates kids and why being religious is worse than being on drugs. He’s offensive and crude but hilariously so. He performs tonight at 7 at Hilarities.
2035 East Fourth St., 216-241-7425, pickwickandfrolic.com.
© 2022 Cleveland Scene