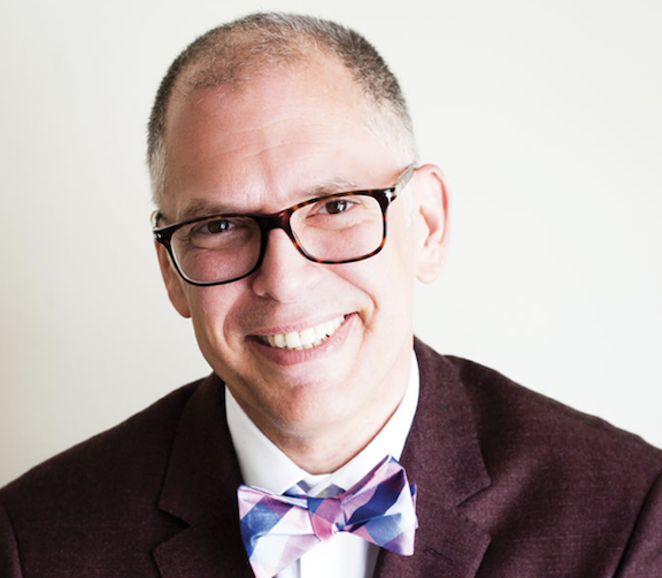 But now Obergefell is going door to door asking for the citizens of Ohio’s House District 89 to elect him as its representative on Nov. 8.

“That’s the last time I went door to door! I was a little worried to get started again, but I really do enjoy it,” Obergefell says.

Per the district maps that were redrawn by a Republican-led commission this year, the area Obergefell is running to represent encompasses portions of Erie, Huron and Ottawa counties along Lake Erie in the northern portion of Ohio. Sandusky – known for rollercoaster destination Cedar Point – is home for Obergefell, but Cincinnati is where his fight for marriage equality began.

Obergefell is running for office in the new post-Roe world, which could have big reverberations upon his own famous case, Obergefell v. Hodges, and other settled landmark laws. In June, the conservative-leaning U.S. Supreme Court ruled on Dobbs v. Jackson, ultimately overturning the long-standing Roe v. Wade, which granted citizens the right to privacy to choose and seek an abortion.

Many people now think that Obergefell, which grants same-sex marriage rights nationwide, will fall next, thanks to opinion language used in the Dobbs/Roe decision.

Why Obergefell’s political race matters to the nation

While living in Cincinnati in 2013, Obergefell and longtime partner John Arthur flew to Maryland to marry after Arthur became severely ill with amyotrophic lateral sclerosis (ALS). But because their home state of Ohio did not recognize same-sex marriages, Obergefell would not be listed on Arthur’s death certificate as the surviving spouse.

The couple did not have the time to wait for Ohio law to change.

Obergefell filed suit to have his name listed on Arthur’s Ohio death certificate in several lower courts before the U.S. Supreme Court agreed to hear the case. In Obergefell v. Hodges – filed against the Ohio Department of Health’s then-director Richard Hodges and as well as other defendants – all nine judges decided in 2015 that states could not discriminate between heterosexual and same-sex marriages and that legal marriages in one state must be recognized in other states.

Now Obergefell finds himself preparing to fight once again for marriage equality in Ohio, this time potentially as a member of the Ohio House of Representatives.

“Being back in my hometown, back in my roots, it was really a matter of right time and right place. This is how I can keep fighting to make things better,” Obergefell says.

When the Supreme Court ruled on Dobbs in June, some justices used language in the opinion that opened up the possibility of rescinding additionl rights. In his concurring opinion in overturning Roe, Justice Clarence Thomas wrote, “In future cases, we should reconsider all of this Court’s substantive due process precedents, including Griswold, Lawrence, and Obergefell.” (Griswold v. Connecticut grants the right to obtain contraceptives, while Lawrence v. Texas grants the right to private, sexual activity).

This means the court’s conservative majority could punt the legality of marriage equality back to the states in the future – and Obergefell says Ohio’s legislature already has acted unfairly.

Roe fell in June, but Ohio Republicans had chipped away at abortion care access within the state for years by regulating gestational deadlines and enacting burdensome protocols on abortion clinics.

“When we lose one right, every other right is at risk,” Obergefell says, adding that Ohio already is taking swings at marriage equality. He points to recent legislative efforts to control the LGBTQ+ community, such as Ohio’s version of Florida’s “Dont Say Gay” bill, which would prohibit the “promotion and teaching of divisive or inherently racist concepts in public schools” while also nixing educational materials about sexual orientation and gender identity.

“They are saying, ‘Sorry teachers, you can’t teach our nation’s history. You can’t acknowledge the existence of – the reality of – the queer communuty.’ That’s harmful, it’s hateful, and when we’re messing with education in that way, it’s not preparing our kids to be successful in a diverse, complicated world,” Obergefell says.

Many Republican lawmakers like Jean Schmidt, an Ohio House rep from Loveland, have chosen schools as their battleground for removing LGBTQ+ rights. In April, Schmidt worked a transphobic amendment into a bill about paying college athletes. The amendment bars transgender students from participating on women’s teams in high school and college.

“They certainly shouldn’t be attacking that one trans girl athlete who simply wants to play sports with her friends,” Obergefell says.

Cincinnati residents Daniel Dilbert and his fiance Michael Taylor have worried about Ohio’s ability to maintain marriage equality, even before the Dobbs decision was announced.

“The world is still changing and people are scared of change,” Dilbert says. “That’s what frightens me every single day.”

Dilbert says that when he heard that Thomas cited the Obergefell decision in his Dobbs opinion, his fears came into sharper focus.

“I thought, ‘Are we going to be able to get married? Are we going to do this together?’ Because, unfortunately, in the world it’s not legal everywhere, and right now it feels like we’re backtracking. It makes us feel belittled,” Dilbert says.

Dilbert says he proposed to Taylor in January under strings of lights and surrounded by thick bamboo stalks at the Cincinnati Zoo and Botanical Garden. He says when they discuss their upcoming wedding, they become excited and then nervous – but it’s not the kind of nerves an engaged couple typically feels.

“Every time we talk about it, it’s an exciting and wonderful moment, but we always have just in the corner of our mind, ‘Is this really going to happen?’” Dilbert says.

“We became a couple when the charter amendment was passed. We were in Cincinnati during a really dark time for the queer community,” Obergefell says, referring to Cincinnati’s Article XII, which denied discrimination protections for LBGTQ+ city residents.

Voters repealed Article XII in 2004, which Obergefell says gave him hope that Cincinnati would become more welcoming for the LGBTQ+ community. In 2015, Cincinnati City Council banned “conversion therapy,”which attempts to “cure” LGBTQ+ people – often youth – of their sexual orientation, gender expression or gender identity when those don’t line up with heterosexual or cisgender ideals. Earlier this year, Cincinnati revised its municipal code to more directly protect gender expression and identity for city workers.

But those advances could be neutered in the future, many legal analysts say. It makes Dilbert and other members of the LGBTQ+ community nervous.

Dilbert says people are afraid of love they don’t understand.

In the meantime, Obergefell will tackle this and other issues in his quest to represent Ohio’s 89th District. Even if he wins, he knows he’ll have an uphill battle in Columbus.

“Come November, do I think the Democratic party is going to take the majority in the statehouse? No,” Obergefell says. “But what I do hope is we can break the Republican supermajority, because that would give Nan Whaley [the democrat running for governor against incumbent Republican Mike DeWine] the power of the line-item veto. Even when bad bills are passed by the House, by the Senate, well, Nan as governor has the ability to veto the lines,” Obergefell says.

Obergefell will face off against Republican incumbent D.J. Swearingen during the general election Nov. 8.
© 2022 Cleveland Scene