Half Moon Bakery to Open Satellite Shop at Tower City, With Plans to Open Full-Service Restaurant Down the Road

The popular empanada, sandwich and pastry shop is primed for expansion 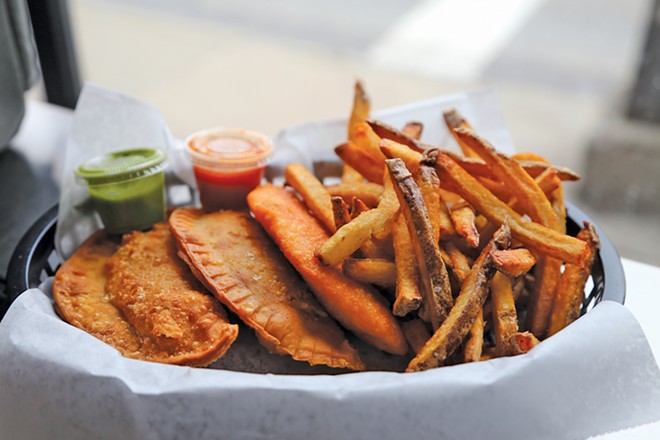 Photo by Emanuel Wallace
Empanadas at Half Moon Bakery

Despite opening at one of the worst times in recent history, Half Moon Bakery (3460 W. 25th St., 216-255-7714) is absolutely thriving, says owner Gerson Velasquez. Along with partner Lyz Otero, Velasquez opened the doors to the Clark-Fulton bakeshop in January 2020, only to be forced to close them again in three months. But ever since reopening in May of that same year, the popular empanada shop has been perpetually slammed, serving between 200 and 250 customers per day.

“We’re really busy,” Velasquez reports. “Sometimes it’s a little insane. It’s good but this spot is a little too small for us.”

To take some of the pressure off the original spot, Velasquez has his eye on expansion. His first move is to open a satellite shop at Tower City, where he’ll take over the former McDonald’s space in food court for another Half Moon. The menu will be nearly identical to that of the Clark-Fulton café, with Argentinian empanadas, Columbian empanadas, empanada-style tacos, Cuban sandwiches and Latin pastries.

Velasquez expects the Tower City shop to open in October or November.

More ambitious plans are on the horizon, says Velasquez. Those plans include converting a vacant commercial building in Brooklyn Centre to a full-service restaurant. Located at Dennison and W. 34th Street, the sit-down restaurant will feature an expanded menu of empanadas, but will also offer breakfast service and other items to the mix. That project will take about a year and a half, says the owner.
© 2022 Cleveland Scene