Located on Brookpark Road, the attraction will feature a biomedical theme 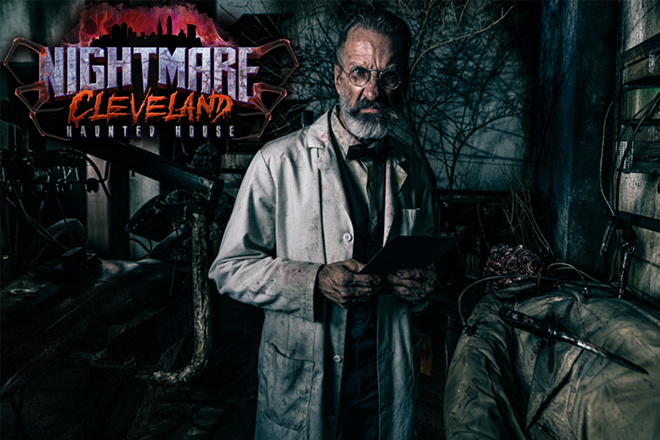 Courtesy of Nightmare Cleveland
Promotional artwork for Nightmare Cleveland.
Richard “Stitch” Thomas got an early introduction to horror films. When he was still a kid, his mother let the Mushroomhead percussionist watch some of the now-classic films.

“I was probably 6 when my mom was letting me watch horror movies,” he says one morning from the location of Nightmare Cleveland, a new haunted house he’s designed. Located in the old B.A. Sweetie building on Brookpark Rd., the place promises to be one the city’s top haunted houses when it opens in early October. “It was 1986, and that was the height of horror. I started acting in haunted houses when I was 15. Years later, I learned to build sets and all the other things of that nature. Being in Mushroomhead for the past 20 years, I have lots of experience with entertaining crowds and costuming.”

The wheels for Nightmare Cleveland were set in motion about five years ago when Thomas met Vaughn Lekan at the Chippewa Lake Slaughterhouse he runs.

“I met Vaughn, and he was looking for some help with the Chippewa Lake Slaughterhouse, I helped him with some scenic stuff to enhance what Lekan had already started,” says Thomas. “I’ve been doing haunts forever, and I helped with some of [Lekan's] costuming and characters.”

“For years now, I've wanted to do this bio-lab sci-fi horror thing,” says Thomas as he walks through rooms filled with old medical equipment painted to look abandoned and bloodied. He was one of the set designers for many years at the Fear Experience Haunted House, which was one exit away from where Nightmare Cleveland is now. “I think this is the perfect location, and in November of last year, we came in and ripped out the drop ceiling and all the old power, months of demolition to strip the interior of the building and start from scratch. Everything is brand new. Because this was such a massive project we reached out to a friend of mine Brian Demski of Demski Creations to help bring these ideas to a level. I would not have been able to get to on my own — very fortunate to have had him on board."

Thomas, who says he’s “terrible at drawing,” simply mapped out a rough sketch of the various hallways that will lead visitors through the “lab.”

The haunted house will feature digital ticketing and an entry area that features old army tents and a quarantine-themed processing point. When the haunt opens in October, it’ll be about half as long as it will be once it’s finally completed. Thomas says the tickets will be cheaper this year until the attraction is entirely completed in 2023.

“The facility within the haunt is called Bioteck Industries, which is a play on the Umbrella Corporation from the Resident Evil video games, also a nod to my favorite video game franchise, BIOSHOCK," Thomas explains. “A corporation that’s experimenting and developing human enhancements." With the sci-fi angle, you have creatures and scientists and there will be robotic assistants; it’s not just monsters.”

For the audio portion of the haunt, Thomas enlisted Nero from Psyclon Nine to create original sound effects. Thomas has made certain to crank the sound throughout the attraction as well.

“There will be laboratory announcements as you get thrown into the world of this lab-gone-bad,” he says. “We cleaned out a lot of dentist offices and bought a bunch of medical equipment at auction. It was all super-clean when we got it, and we just painted it to look gross. Each room will have its own custom audio to capture the theme. Myself and John Sustar have spent a lot of time with making sure the audio is on point"

Thomas isn’t shy about talking about how Nightmare Cleveland, which will also be open for Valentine’s Day weekends and Friday the 13ths, will be superior to other local haunted houses such as Seven Floors of Hell and others.

“We technically don’t have any competition,” Thomas says. “I’m throwing everything I know into the ring on this one.”
© 2022 Cleveland Scene