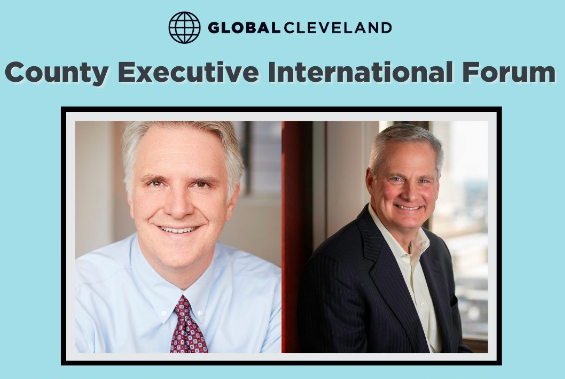 Ronayne announced that, if elected, he would create a dedicated office of international affairs and, on top of that, a "first gen" program within the county's office of economic development geared toward helping immigrant entrepreneurs.

Ronayne said that immigrants and immigration should be viewed through the lens of economic development. And while he acknowledged that this might seem crass to some, he said it's the language that funders are animated and persuaded by.  More active partnerships across the public, private and nonprofit sectors could improve and expand programs for international students, immigrant entrepreneurs and refugees, he said, which in turn would improve the economic prospects of the region.

He hastened to add that while there was an obvious bottom-line benefit for Cuyahoga County in assisting the international community, a commitment to welcoming and retaining newcomers was also the right thing to do.

The forum was held on the outdoor patio of the Ohio City tavern Jukebox and was moderated with almost mesmerizing impartiality by Jones-Day attorney Sanjiv Kapur. Eleven questions on international topics — international students, sister cities, population loss, translation services, voting, etc. — were authored by event organizers and posed to both candidates in turn, followed by an audience Q&A in the City Club style.

The headline news of the evening might have been Ronayne's proposed office of International Affairs, but the forum was the first time that both Ronayne and Lee Weingart, the Republican candidate, appeared publicly together since they emerged victorious from the May primary. And sparks certainly flew from the clashing of swords unsheathed at last. As they prepare for next week's formal debate at the Renaissance Hotel, Monday's forum was an early glimpse for voters into the burbling enmity between them.

Though not structured as a debate, Weingart and Ronayne often prefaced their official answers with obliquely related attacks and responses. This personal dialogue, in effect, ran as a parallel program.

Weingart rushed to make distinctions between he and Ronayne early on, criticizing the creation of an International Affairs department when Ronayne had already pledged to create new offices for transportation, housing, and an ombudsman to field calls from residents. Weingart said that he was the candidate of small government, and that Ronayne wanted to grow government to hire his friends and cronies. Ronayne snapped back that an organizational restructuring was urgently required, given the current disarray of county government and the thousands of requests for service that go unanswered. "I'm proud of it," Ronayne said off mic, when Weingart laid into the ombudsman plan.

In general, Weingart framed his responses to questions on international issues as extensions of his existing plans to revitalize Cleveland's urban core — adding 4,000 new jobs, getting 10,000 families into homes, among others — and leaned on his experience as both a county commissioner in the '90s and as a lobbyist, including his work with Cuba.

Both candidates stressed their commitment to improving minority contracting in the county, a goofy episode that culminated in Weingart's declaration: "I am the one committed to minority contractors. You can try to one-up me, but you won't!"

Ronayne poked Weingart for characterizing his work as a lobbyist as "government relations," to which Weingart replied that Ronayne had hired plenty of lobbyists in his career. Why was it okay to hire a lobbyist but not to work as one? To which Ronayne replied that he'd never hired LNE Group, Weingart's firm.

When Ronayne listed a few of his endorsements, Weingart noted that Ronayne hadn't been endorsed by either Cleveland City Councilman Kevin Conwell or Cuyahoga County Councilwoman Yvonne Conwell, both of whom represent areas that include portions of the University Circle Inc. service area, where Ronayne long served as  executive director. Might that be because Kevin Conwell was stopped by UCI Police for "walking while Black?" Weingart asked.

Ronayne, in the preface to the final question, said that for the remainder of the campaign, he would try to focus on facts and truth, while Weingart could be counted upon to spread misinformation and try to dupe voters. For example, it was the Case Western Reserve University Police, not the UCI police, that stopped Conwell in the 2018 incident Weingart referenced.

"You've got to own that," Ronayne told Weingart, in a tense moment that felt like it lasted about a thousand years. "Own that, as you decide to throw facts around as fiction."

Though Weingart was proud to cite his personal and professional experience on international issues — hosting international students, attempting to establish a sister city relationship with Cuba — Ronayne's experience and posture toward immigration gave him both a greater command of the issues and a warmer reception by the audience, many of whom work in related nonprofits. And though Weingart promoted a "policy over politics" approach, Ronayne could not resist aiming for the exposed jugular in a closing statement.

"We've got to lean in on every aspect of this," he said. "Lee Weingart comes from the party of Donald Trump, the party that brought you the wall. Lee Weingart was hostile to the idea sanctuary cities. I am not. I will lean in and say listen, we are a city of immigrants... we are Cuyahoga County. We are Cleveland, once the fifth-largest city, built by immigrants. We will be an international center on the Great Lakes and our best days are ahead if we think in terms of all of us."