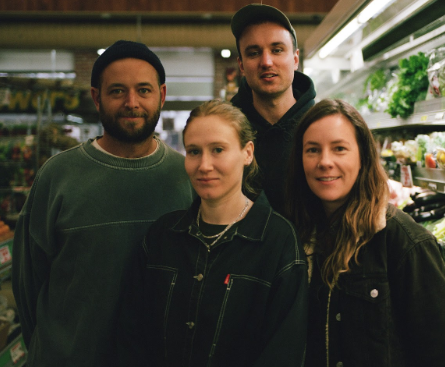 Courtesy of Mora May Agency
Quivers.
Our weekly picks of the best things to do in Cleveland this weekend. Also check out our full Cleveland event calendar.

THU 09/22
Quivers
Originally slated to tour the States in 2020, Australia's Quivers spent lockdown writing the music for its second album, Golden Doubt. The jangle pop band excels at earworm indie pop, as songs such as ""Burnt My Maps" attest. The band recently supported the like-minded Hold Steady at the Corner Hotel in Melbourne, and it's now headlining small American clubs. It plays tonight at 9 at the Happy Dog. Sure, Machine, Jason Kaminski and Laughing Chimes open. Tickets start at $10.
5801 Detroit Ave., 216-651-9474, happydogcleveland.com.

American Mariachi
Set in the 1970s and performed with live music and plenty of humor, American Mariachi offers a "heartwarming story of family, memory, and the power of song," as it's put in a press release. Tonight's performance takes place at 7:30 at the Allen Theatre, where performances continue through Oct. 9.
1407 Euclid Ave., 216-241-6000, playhousesquare.org.

Alec Benjamin
The popular singer-songwriter comes to the Agora tonight at 7 in support of his latest album, (Un)commentary. The introspective album features 13 tracks, including the new single “Speakers” and the previously released “The Way You Felt,” “Older,” and “Shadow of Mine.” Claire Rosinkranz opens the show.
5000 Euclid Ave., 216-881-2221, agoracleveland.com.

Browns vs. Pittsburgh Steelers
The Browns will try to recover from a tough loss to the Jets as they face their division rivals from Pittsburgh for the first time this season. For the first time in years, retired quarterback Ben Roethlisberger won't be leading the Steelers, giving the Browns a good chance of getting the win (Big Ben was 25-3-1 against the Browns). The game begins at 8:15 p.m. at FirstEnergy Stadium.
100 Alfred Lerner Way, 440-891-5000, clevelandbrowns.com.

Ismo
This Finnish comedian made his U.S. debut in 2014 at the Laugh Factory in Hollywood where he won the title of the Funniest Person in the World. He's been coming to the States ever since. He performs tonight at 7 at Hilarities.
2035 East Fourth St., 216-241-7425, pickwickandfrolic.com.

Little Shop of Horrors
The songwriting team of Howard Ashman and Alan Menken are behind this sci-fi musical that features popular favorites such as “Suddenly, Seymour,” “Skid Row,” and “Somewhere That’s Green.” The Great Lakes Theater Festival presents the play tonight at 7:30 at the Hanna Theatre, where performances continue through Oct. 9. Tickets start at $20.
2067 East 14th St., 216-241-6000, playhousesquare.org.

Old 97's
This alt-country group formed in Dallas in 1993, and it's safe to say that there aren't many bands that formed in 1993 that are still playing. And it's even safer to say that there aren't many bar bands from that time that are still playing today. The band's major label debut, 1997's Too Far To Care, put it in the same league as Americana icons such as Bottle Rockets and Wilco. Tonight's show starts at 7 at House of Blues.
308 Euclid Ave., 216-523-2583, houseofblues.com.

FRI 09/23
Pi'erre Bourne
Pi’erre Bourne has crafted beats for the likes of Kanye West, Playboi Carti, Lil Uzi Vert, and he has also released acclaimed solo projects The Life of Pi’erre 4 and The Life of Pi’erre 5, which was hailed as one of the best albums of 2021 by various media outlets. The singer brings his Good Movie world tour to House of Blues tonight at 7.
308 Euclid Ave., 216-523-2583, houseofblues.com.

Curtis Cook
A writer for the recent reboot of Crank Yankers and the Hulu comedy This Fool, comedian Curtis Cook has also written for American Dad. He's also played all kinds of festivals and opened for the likes of Dave Attell. He performs tonight at 8 at Hilarities.
2035 East Fourth St., 216-241-7425, pickwickandfrolic.com.

Earthquake
Better known by his stage name Earthquake, Nathaniel Martin Stroman has worked as an actor, voice artist and comedian since the 1980s. His jokes tend to steer clear of current events as he talks generally about the trials and tribulations of being in relationships. "I've been investing in women for 40 years and have yet to see a profit," he jokes in one routine. He performs tonight at 8 at the Masonic. Check the venue's website for ticket prices.
3615 Euclid Ave., masoniccleveland.com.

Ingenuity Fest
The annual arts festival kicks off today at the Hamilton Collaborative with immersive installations and live performances. The festival continues through Sunday. Consult the website for more info.
5401 Hamilton Avenue, 216-589-9444, ingenuitycleveland.org.

John Mulaney
Comedian John Mulaney became a household name back in 2018 when he traveled the United States with sold out Kid Gorgeous tour, which was later released as a Netflix standup special and won the Emmy for Outstanding Writing in a Variety Special. Earlier this year, he took his newest hour, John Mulaney: From Scratch, on the road. He performs tonight at 8 at Rocket Mortgage FieldHouse. Tickets start at $39.50.
One Center Court, 216-420-2000, rocketmortgagefieldhouse.com.

SAT 09/24
Benefit for the ‘Bin
Since 2010, Buzzbin Art & Music Shop has been a destination for Northeast Ohio concert goers, music enthusiasts, performers, and those just looking for a good time. After over a decade in downtown Canton, Buzzbin is relocating to Kenmore Blvd. in Akron. To help the Buzzbin folks with the move, a multi-venue benefit concert takes place from 3 p.m. until 2 a.m. toda. Benefit for the 'Bin will feature 20 bands and solo artists will take over the stage at Buzzbin's new location at 952 Kenmore Blvd. and the Rialto Theatre, which is located two blocks away at 1000 Kenmore Blvd. Attendees will need only one ticket/pass for admittance into both venues.
buzzbinkenmore.com.

Bev Rage & the Drinks
Frontperson Beverly Rage, a 7-foot tall drag queen in hair and heels, dug deep to write about topics such as heartbreak, revenge and sex on Exes & Hexes, the latest effort from the talented Chicago band. The group performs with Slug Fest and Total Downer tonight at 9 at the Happy Dog. Tickets start at $10.
5801 Detroit Ave., 216-651-9474, happydogcleveland.com.

Brown Eyed Women
This Grateful Dead tribute band that includes Dana Carroll (Lovelight Band) on bass, Joni Bottari (Spiral Light) on lead guitar, Katie Moore (Deep Blue Sun) on guitar, Jill Simmons (the Cause) on lead vocals, Caroline Kiloh (Fennario) on keyboards and Denise Parent (the Deadbeats) on drums and lead vocals will perform tonight at the Beachland Ballroom as part of a special fundraiser. Net proceeds of the event will benefit Journey Center for Safety and Healing, which provides services to those affected by domestic violence and child abuse in greater Cuyahoga County.
15711 Waterloo Rd., 216-383-1124, beachlandballroom.com.

¡Celebremos Juntos!
The Rock Hall celebrates Hispanic Heritage Month with this free community celebration that takes place from 10 a.m. to 2 p.m. on the Union Home Mortgage plaza. Latin City Soul, a 10-piece Latin band, will perform at noon, and dancers in costume from the annual Puerto Rican parade will join in and perform to the music. La Mega radio station will be onsite with raffles and giveaways.
1100 Rock and Roll Blvd., 216-515-8444, rockhall.com.

Finding Nemo/The Goonies
Tonight at 6:30, Cleveland Alliance presents a free movie night at North Coast Harbor's Voinovich Park. You can bring a lawn chair or blanket for a double-feature on an outdoor screen. Snacks and refreshments will be available for purchase. The Goonies and Finding Nemo will show at this evening's event.
downtowncleveland.com.

Conan Gray
Since releasing original demos on his YouTube channel at the age of 15, singer-songwriter Conan Gray has become increasingly popular and delivered commercial hits such as “Heather” and “Maniac.” He comes to Jacobs Pavilion at Nautica tonight at 7:30 as part of a tour that's his first in support of his second full-length album, Superache.
2014 Sycamore St., 216-861-4080, jacobspavilion.com.

SUN 09/25
Mojo Brookzz
Comedian Dyon "Mojo" Brooks brings his Toxic but Funny Comedy Tour to the Improv tonight at 6:30. Brooks can brag that he's made some 900 video skits, several of which have garnered more than one million vides. Check the Improv website for more info.
1148 Main Ave., 216-696-IMPROV, clevelandimprov.com.

From Cleveland, For Cleveland
This interactive, virtual conversation series featuring Monica Potter, Lili Reinhart, Paul Raci, Mark Waters & Dina Spybey-Waters, Alan Ruck and Tom Hanks takes place from June through November at the historic Capitol Theatre in Gordon Square Arts District. During a moderated talk hosted live via Zoom, each guest will discuss his or her unique perspective on the television and film industry and give advice to aspiring actors. VIP ticket holders will be able to ask questions of the featured guest and all are invited to network with their peers at the conclusion of the presentation. Angela Boehm, Holly Fulger and Lauren Nichols will moderate. Doors open at 6 p.m. and interactive conversation begins at 7 p.m. A portion of proceeds will benefit the Greater Cleveland Film Commission.
1390 West 65th St., 216-651-7295, angelaboehmcasting.com/1st-team/.

Melvins
The veteran doom/sludge rock act released two new albums last year after getting grounded by the pandemic. Expect the L.A. band to play an epic set as it returns to the Grog Shop, one of its favorite clubs. Part of the Grog's 30th anniversary celebration, the concert begins at 8 p.m. Tickets cost $28.50.
2785 Euclid Heights Blvd., Cleveland Heights, 216-321-5588, grogshop.gs.

Carolanne Miljavac
Comedian Carolanne Miljavac has cultivated a massive online presence across multiple social media platforms and aims to "spread laughter and joy without sacrificing honesty and truth," as it's put in her bio. In her book, She Laughs, she talks about issues such as poverty, grief and life's struggle. Plenty of her jokes center on being a mom, and, judging by recent Facebook posts, she's quite perturbed at the way people have stocked up on toilet paper. She performs tonight at 6 at Hilarities.
2035 East Fourth St., 216-241-7425, pickwickandfrolic.com.
© 2022 Cleveland Scene