Garry Lawson, who was born in Jamaica, has a very definite view on right and wrong when it comes to the cuisine 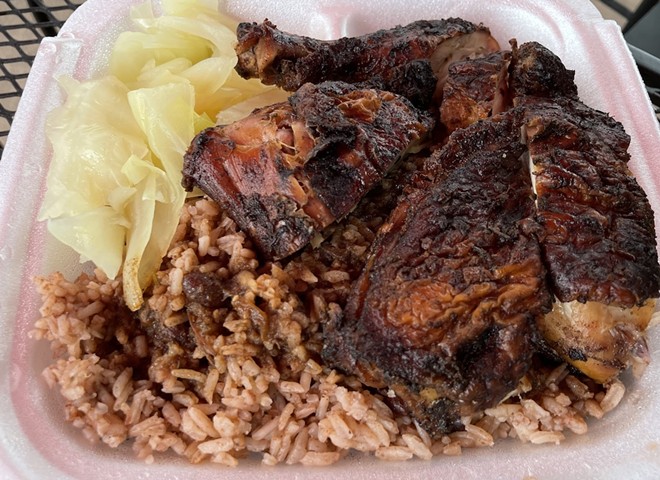 Garry Lawson was growing weary of his weekly commutes between Cleveland and Florida for his restaurant job. With some gentle coaxing from his wife Nadette, the pair decided to change course and pursue a place of their own.

“Garry was going back and forth for three years, so we started thinking, ‘Why are we doing this,’” recalls Nadette. “‘Why don’t we do something of our own?’ And so we started looking.”

When the Campus Grille in Berea closed after seven years in business, a neighbor who had enjoyed Garry’s jerk chicken on more than one occasion encouraged the couple to take a look at the space. Not only was the restaurant ideal in terms of size and layout, but its location in Berea meant that they would be the only Jamaican restaurant for miles.

“Garry said he didn’t care where we went because he cooks from the heart,” explains Nadette. “I said, ‘I know, but we don’t want to go into a crowded market.’”

Garry and Nadette, who goes by the name Maria, opened Gar and Mar in July. Both were born and raised in Jamaica before moving to the States about 20 years ago. Garry worked in restaurants in both countries, and he has a very firm concept of right and wrong when it comes to Jamaican cooking. For example, despite Cleveland’s less-than-tropical winters, Garry refuses to cook his jerk chicken on anything but a traditional Jamaican-style drumpan. A custom grill and shed was erected behind the restaurant.

Garry’s jerk chicken ($11.50) is exceptional. The marinated, spice-rubbed bone-in meat is grilled to a chestnut-brown hue. Unlike versions cooked in the oven, the meat is firm as opposed to fall-off-the-bone tender. It’s slightly smokey from the flames and intensely flavored, but not overly spicy. For those who crave heat, the restaurant offers a variety of fiery scotch bonnet-based hot sauces.

If you love braised oxtails ($16), you’ll definitely want to order the dish here. The jiggly-soft, gelatinous bone-in pieces of meat luxuriate in deep, dark gravy, which is spooned over rice. All it takes to separate the meat from bone is gentle suck or tug. Gar and Mar also offers an excellent version of curry goat ($11) that features surprisingly lean and mild meat. You can also get jerk pork ribs, curry shrimp and steamed fish. All meals are available in two sizes and come with rice and beans and a choice of steamed cabbage or fried plantains. Visit at lunchtime on Tuesdays, Wednesdays or Thursdays and enjoy specially priced meals for just $7 or $8.

Most authentic Caribbean restaurants offer a traditional Jamaican breakfast, aka “Jamaica’s national dish,” and Gar and Mar is no exception.

The dish hasn’t yet taken off at Gar and Mar, but the Lawsons are indefatigably patient and enthusiastic hosts who encourage newcomers at every turn.

“We try and bring the culture,” says Nadette. “Whenever someone comes into the restaurant we always are available to explain the menu to them. We have a philosophy at the restaurant: I tell everyone who works here to treat every person as if they’re the president.”

The counter at Gar and Mar is adorned with the ubiquitous “patty warmer,” a two-level heated display here stocked with both ground beef ($2.70) and curry chicken ($2.70) filled Jamaican patties. Long ago I learned to make a sandwich with mine by tucking a flaky neon-orange patty inside an airy coco bread roll ($2.50). It’s a riot of flavors and textures, especially when doused with hot sauce.

“This is how we eat it in Jamaica!,” Nadette exclaimed when I mentioned it. “We encourage our customers to try it that way. You might have been the first one to do so.”

In addition to the patties and coco bread, the menu offers other Jamaican sides like callaloo, fried okra and “festivals,” which are fried sweet dumplings. Of course, there are fresh-made fruit and vegetable juices, ginger beer and Ting grapefruit soda.

After replacing some large booths in the dining room with tables, the restaurant feels more spacious than it did during the Campus Grille era. There is seating for about 50 guests indoors, with more seats available on a quiet front patio. Baldwin Wallace students never had it so good.