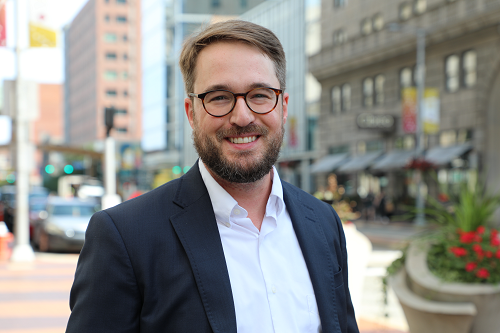 Signal Cleveland
The face behind After Jackson: Cleveland's Next Mayor

The new nonprofit newsroom Signal Cleveland announced Thursday its first round of editorial hires. After an extensive interview process, which included conversations with Cleveland Documenters and other community members, five reporters and a multimedia director will join editor in chief Lila Mills and managing editors Mark Naymik and Lawrence Caswell. With its founding newsroom in place, the digital publication plans to launch in October.

The marquee acquisition is Ideastream's Nick Castele, who has been tapped as Signal's government reporter. Castele was long rumored to be a target of the American Journalism Project outfit and steps in as one of two senior reporters. He joins the venture after 10 years at the local NPR affiliate Ideastream Public Media, where his crowning achievement was the 2021 podcast on the Cleveland mayor's race, After Jackson: Cleveland's Next Mayor.

The other senior reporter will be Olivera Perkins, who was the business reporter at the Plain Dealer for many years. At Signal, her beat will be economics.

The integration of the Cleveland Documenters, who live-Tweet public meetings for the purposes of engagement and accountability, will be a key component of the Signal newsroom.  It's perhaps natural that two Documenters have been hired as full-time reporters. Candice Wilder, who has served as a Documenter while freelancing for various outlets, including Cleveland Magazine locally, will cover health. Documenter Paul Rochford will cover education. Signal notes that Rochford was a former City Year Cleveland AmeriCorps member based in a charter school.

Rounding out the founding reporting team will be Stephanie Casanova. She arrives from the Chicago Tribune to cover criminal justice in Cleveland.  Casanova hails from Tucson, Arizona, and is the daughter of Mexican and Peruvian immigrants.

Signal's multimedia director will be Jeff Haynes, who served most recently as a producer at Ideastream.  In his new role he will "bring stories to life with videos and animation," the announcement reads.

Other newsroom jobs are currently posted on the Signal site, and additional personnel will join this first batch of hires in the coming months.