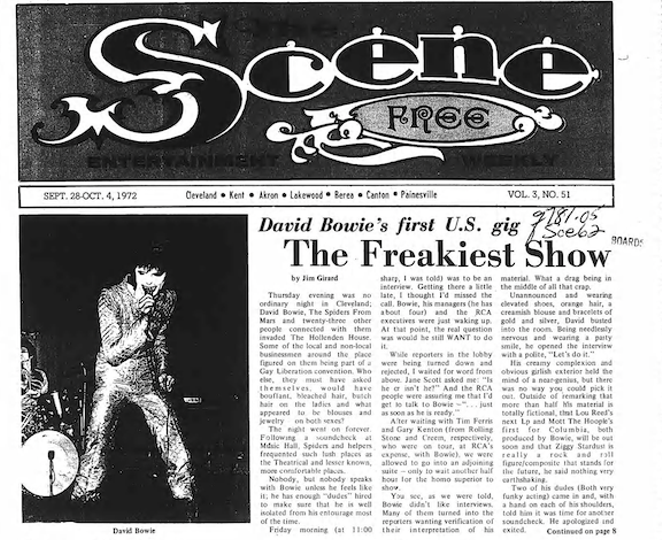 Fifty years ago today, David Bowie played his first stateside gig at a sold-out Music Hall in Cleveland where more than 3,000 fans welcomed the Spiders with anticipation.

Scene was there that day on Sept. 22, 1972. Here's our original review, as written by Jim Girard, who also got a chance to catch up with Bowie before the gig:

Thursday evening was so no ordinary night in Cleveland. David Bowie, The Spiders From Mars and twenty-three other people connected with them invaded The Hollenden House. Some of the local and non-local businessmen around the place figured on them being part of a Gay Liberation convention. Who else, they must have asked themselves, would have bouffant bleached hair, butch hair on the ladies and what appeared to be blouses and jewelry on both sexes?

The night went on forever. Following a soundcheck at Music Hall, Spiders and helpers frequented such lush places as the Theatrical and less known, more comfortable places.

Friday morning (at 11:00 sharp, I was told) was to be an interview. Getting there a little late, I thought I'd missed the call. Bowie, his managers (he has about four) and the RCA executives were just waking up. At that point, the real question was would he still WANT to do it.

While reporters in the lobby were being turned down and rejected, I waited for word from above. Jane Scott asked me: "Is he or isn't he?" And the RCA people were assuring me that I'd get to talk to Bowie... "just as soon as he's ready."

After waiting with Tim Ferris and Gary Kenton (from Rolling Stone and Creem, respectively, who were on tour, at RCA's expense, with Bowie), we were allowed to go into an adjoining suite — only to wait another half hour for the homo superior to show.

You see, as we were told, Bowie didn't like interviews. Many of them turned into the reporters wanting verification of their interpretation of his material. What a drag being in the middle of all that crap.

Unannounced and wearing elevated shoes, orange hair, a creamish blouse and bracelets of gold and silver, Bowie busted into the room. Being needlessly nervous and wearing a pasty smile, he opened the interview with a polite, "Let's do it."

His creamy complexion and obvious girlish exterior held the mind of a near-genius, but there was no way you could pick it out. Outside of remarking that more than half his material is totally fictional, that Lou Reed's next LP and Mott the Hoople's first for Columbia, both produced by Bowie, will be out soon and that Ziggy Stardust is really a rock and roll figure/composite that stands for the future, he said nothing very earthshaking.

Two of his dudes (both very funky acting) came in and, with a hand on each of his shoulders, told him it was time for another soundcheck. He apologized and exited.

As The Byrds and Dylan sing: "Nothing was delivered."

That evening at the concert was another story.

The show opened up with Ruth Copeland — in amazing form considering that she'd only had her back-up band for three days. The audience was mildly appreciative.

When Bowie was announced by a voice in the dark, loud and very regal intro music was fading. The strobe light (utilized quite well for a change) revealed the animated quartet run and plug in. The crowed cheered, knowing that their boy was gonna put out... the audience was knowledgeable of his material, knowing most of his songs. However, they related only mildly: they let him boogie and rave while most just stood in awe.

I won't go on and name all of the songs he performed, for that would have to include almost all of his major recorded works. Numbers such as "Space Oddity," "Man Who Sold the World," and ALL of the Ziggy Stardust material were almost flawless. No arrangements were altered; the difference was in the visuals (i.e. Bowie wrapping his arms around his shoulders like Liza Minnelli and his arms flailing about like Elvis with a lot of imagination.)

The finest surprises of the evening were when Bowie did The Velvet Underground's "Waiting for the Man" and The Beatles' takeoff of "This Boy"... for him it was "This boy wants him back again." The audience half laughed at that remark; many weren't sure where to put that remark in their heads.

Of course, the reason Bowie is happening on such a high media level is because, in fact, he does scare a lot of people with his honesty about his sexuality, or shall I just say his personal preferences.

For an encore — which a much dazed audience yelled for — Ziggy & The Spiders did Chuck Berry's "Round and Round." Then the end had come, and after almost two hours of watching the most professional (they didn't tune a guitar once), entertaining, tightest and most visual (makes The Who look like Andy Williams — no offense to The Who) routine in pop music, to say it was fantastic is pointless.

Mick Ronson, on lead guitar and vocals, was the focal point and strength of The Spiders From Mars. His guitar work is precise, as is his piano and bass work. Ronson is a show in himself.

Trevor Bolder was not exceptional. His bass playing was functional and steady.

Mick Woodmansey should be considered one of the most laid-back, most precise and powerful drummers in Britain — especially with the pre-Ziggy Stardust material.

Bowie, himself, is very lucky. And he doesn't put down any of his older material. Admittedly, the Ziggy & The Spiders thing is only a phase but will eventually blend into something else.

So when the initial "he's what's happening" crap passes, Bowie won't fade into nothing. Because he is a STAR. And when the papers stop writing of him as an Anthony Newley protege and the rest hope he'll return to being a Lou reed legend, Bowie will be pounding it out. He wears his image well. He is a liberated dude with an infinite amount of foresight. Outrageous.

These lines, not as Clockwork Orangey as the rest of the Ziggy LP, put Bowie's ambitions on the line:

"We can't dance, just ball and play
But we move around like tigers on vaseline
The bitter comes out better on a stolen guitar
You're the blessed, we're the Spiders From Mars."