Indie rock legends played thrilling overview of songs, styles that made them great 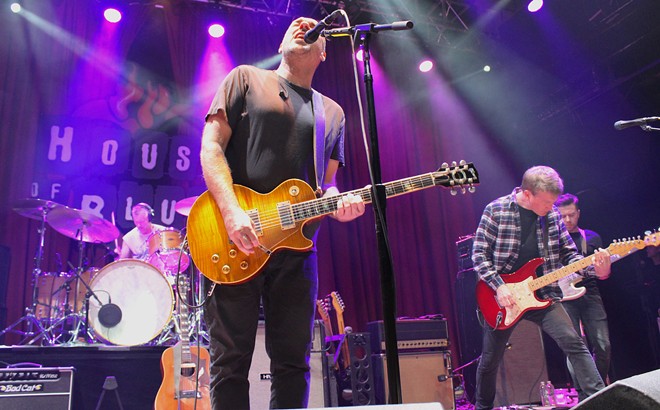 Sunny Day Real Estate has reunited and it feels oh so good. And the band looks like it’s having fun playing decades-old songs; even better.

The Seattle band, perhaps better known to less devoted music listeners as the one that Dave Grohl plundered in the 1990s to form an early lineup of Foo Fighters, powered through 15 songs during its 85-minute concert Tuesday night at the House of Blues.

The three original members and two touring musicians showed that the songs on their four albums, released between two and three decades ago, have aged incredibly well.

Every style the indie/emo/alt-rock/etc. band took on in its heyday was there.

There was a sweeping coda that sounded like a boat traversing choppy waters on “The Rising Tide,” outdoing opening act The Appleseed Cast at its own game, (though just barely, as the quartet put on a strong show of its own). There were breakdowns that saw Jeremy Enigk, Dan Hoerner and auxiliary axeman Jason Narducy weaving their knotty guitar lines.

And there were cathartic scream-a-longs. Enigk’s voice, a mix of falsetto, crooning and shouting, has lost none of its power, as evidenced by searing takes on “Seven” and “In Circles” from the band’s 1994 debut “Diary.”

The members appeared plenty limber too, even if age appears to have caught up with them a bit. Enigk slashed and swayed throughout the set, looking up while he sang as if straining to hit some of the high notes, (he managed to hit them all). Hoerner, to his right, bounded about the stage with rampant energy.

Narducy and bassist Chris Jordan, meanwhile, had a more muted presence on stage left, coloring the music with sonic flourishes that managed to cut through the surprisingly good sound mix.

The real MVP, though, was drummer William Goldsmith, who hit the skins hard enough to show Grohl the mistake he made by recording over his drum parts for the Foos’ 1997 album “The Colour and the Shape.”

But this was not some attempt by men in their 40s and 50s to try and perform like an up-and-coming band. No, they acted their age and seemed like they had a blast doing so.

And while most of the set was made up of decades-old songs, the band did pull out “Lipton Witch” from a 2014 single with Circa Survive. It fit in well and showed a path forward for even more new music, (hint hint). Tuesday night’s concert showed that, should that ever come to fruition, there would be nothing embarrassing about Sunny Day Real Estate revisiting the sounds that made them legends in indie rock circles.

For now, though, I’ll settle for what we got: a competent, often thrilling overview of everything it does well.