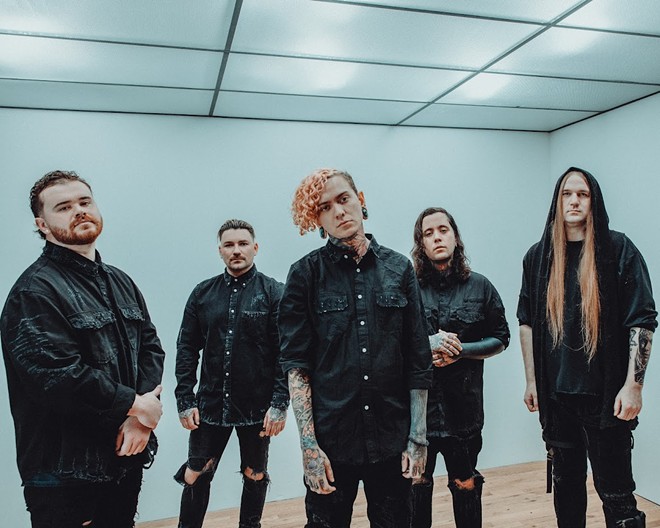 Breaking the Law PR
Lorna Shore.
Lorna Shore drummer Austin Archey recalls seeing the New Jersey-based death metal band in the 2010s before officially joining the group. While the group would eventually develop its death metal sound to become the potent force that it now is, Archey knew the band was onto something even then.

“You could tell back then that the band was kind of different and ahead of everyone,” he says via phone from his New Jersey home. Lorna Shore performs on Thursday, Nov. 17, at House of Blues.

Archey became friends with former lead singer Tom Barber and was even sitting in the car with him when the group’s original drummer called to tell him he was quitting the band. Barber asked Archey to join the band, and he readily agreed to jump on board.

“We just knew he was this dude who looks super young,” says Archey of Ramos. “But when we lost our old vocalist, I reached out to him. I didn’t know if he’d be interested. He was all in. Seven years into a career, it’s hard to find someone with that dedication. He was very prepared. I think he prepared his whole life for this. His first long tour with us was a two-week stretch. He hadn’t done anything like that. It was remarkable to see him step up from the ashes and become bigger than all of us.”

After the pandemic cut Lorna Shore's 2020 European tour short, band members continued to keep in touch via group texts and managed to write and record an EP.

“[The European tour] was Will’s final tryout,” says Archey. “After that, we wanted to know if we could write songs with him and then finally realized at that time that he was the man for the job.”

In the process of working on the EP, the band cut “To the Hellfire,” a tune that would become its signature track.

“I had no idea for what our threshold was like,” says Archey when asked about the track. “When we recorded it, we thought maybe it was too much, but it just felt right. We were angry, and it’s an aggressive song that wholeheartedly displays Will’s abilities. It’s like, ‘Here’s exactly what he sounds like.’ It’s probably the craziest song the band has written. I knew it would shake the music industry, but I didn’t know it would be outside the genre. It exceeded all expectations."

Almost a year after the sessions for the EP concluded, the band began working on its latest album, Pain Remains. Finishing the album proved to be a challenge since the band's popularity put some pressure on the group to deliver something that would live up to the hype. The resulting album is an epic affair that clocks in at just over an hour and commences with the riveting "Welcome Back, O' Sleeping Dreamer," a tune that begins with an orchestral flourish before howling vocals and deafening drums take over.

“We were forced to go on tour and take time away from writing, and it threw us for a bit of a loop and created some pressure," admits Archey. "Going into the studio to work on the album, we knew we had to top ourselves.”

The band recorded at Michigan’s Random Awesome Studios with producer Josh Schroeder in the fall of 2021.

“It’s essentially a one-man operation,” says Archey when asked about the studio. “It’s in the basement of his house. If you walk in the studio, the coffee is already being made. There’s probably cookies or something out that Josh’s wife baked for everyone. It’s a home-like environment and the most comfortable environment you could be in. It’s great. You don’t have to be in some recording studio sleeping on the floor. We make ourselves miserable and crazy with our own vices, so we don’t need any more discomfort. That grounds us a bit.”

Archey says that after years of opening for other acts, band members are excited to not only headline but also select the openers.

“It’s first one where we’re doing the most with in terms of how long the set is and the support bands,” he says. “We wanted this package. Supporting tours are great but to put together a tour has a whole different meaning. Production-wise, I don’t want to let too much out. We’ve invested in ourselves a lot. We want to blow the doors off every venue. It’s the craziest show the band has ever put on, but this is our big moment. I think we have all come together over the years to master our craft and put on a good visual show. Will is screaming and running around.  It’s very impressive that he can move and engage crowd while barking out those crazy vocals.”
© 2023 Cleveland Scene