This Isn't the First Time Cleveland Walleye Fisherman Jacob Runyan Has Been Accused of Cheating. We Interviewed Him After the Last Incident 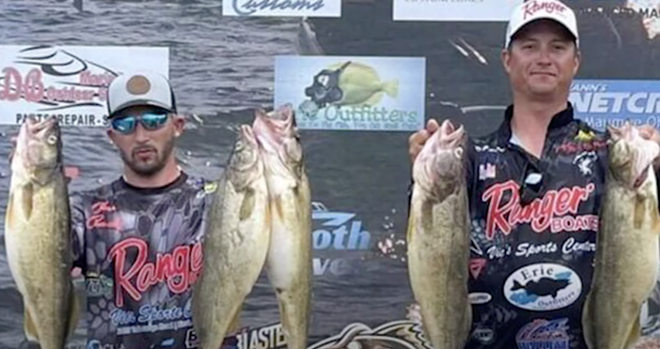 When Jacob Runyan, the Cleveland walleye fisherman now embroiled in a dramatic cheating scandal, talked to Scene last February, it was on the heels of a disqualification from a fall 2021 competition that drew allegations the pair had cheated in that tournament as well.

At the time, Runyan described himself as "semi-retired" from fishing competitions and hard at work studying for his captain's license while he consulted with a lawyer and waited to see what the disqualification would mean for the pair's relationship with sponsors.

"In order to be a charter captain on ore boats or tug boats or anything bigger than a weekend warrior boat, you have to have a captain's license," he told Scene. "It's like a two-month course, it's a lot of work. It's almost like learning Latin."

Lie detector tests, while scientifically unreliable and inadmissible in court, are frequently used in fishing derbies to determine whether or not winning anglers are telling the truth — that they actually caught the fish, that the fish weren't manipulated, etc.

Last year's Fall Brawl and Walleye Slam on Lake Erie ran concurrently, meaning anglers could submit the same fish in both competitions. Runyan and Cominsky did just that and won both. But while they passed the polygraph for the Walleye Slam, and collected the first prize of a boat valued at $151,670, one of them failed the polygraph for the Fall Brawl, which meant losing out on the first prize of a $125,000 Ranger boat and facing immediate questions about their integrity.

Runyan was defiant, intent on proving their innocence, and spun vague conspiratorial  accusations of his own.

"The answer is we're pursuing legal recourse," Runyan told Scene in February. "This is such a long, deep story. You start getting into the politics... I've probably talked to thousands of people. In the bar business, you see the lowest of the low, and I'm pretty good at picking out where there's shady stuff going on. You start seeing things. You start observing. You see certain groups of cliques of the same people over and over again."

He felt, after scrapping away with middling results, that success in 2021 with his new partner Cominsky had made fellow competitors, for lack of a better word, jealous.

"I wanted to make it to the upper echelons. This stuff is serious, so I've been through a couple of partners. It's a very expensive hobby, a very expensive business. I heard Chase was looking for a partner. He had money. He had the best equipment. Paired with my knowledge...," he told Scene. "We had a rough start of the season, but we won the Spring Derby, and we saw a little drama. People talking shit, saying, 'We could beat you.' Well, you didn't. We started to get steam, we're placing higher, we had a couple of good finishes."

But after the fall tournament wins, "It started to get real political," Runyan said.

"In the Spring Derby, it was a three-hour lie detector test," he said. "They asked me all kinds of questions. Just grilling for three hours. For the Fall Brawl, they're asking Chase, who is getting lie detected — which is not common, they usually detect only the one who reeled the fish, and that was me — and they're asking if he's had sex with farm animals, does he cheat on his wife. It was the same thing with spring for me. It was goofy. I remember thinking what is the fucking point of this? Why can't we talk about the fish? What time did you launch? What time did you catch it? What did you do with it after you caught it? Like you want exact times? I was excited we had a big fish, and it's almost like they're trying to trip you up. I had nothing to hide. In the Fall Brawl, I had awoken to how much bullshit was going on. We knew we were screwed."

In late winter 2022, Runyan was assessing the professional fallout from the failed polygraph.

"We were in negotiations with Cabela's and Bass Pro Shop, to be pro staff. You get 50% off gear the first year and a lot of money, basically like a stipend. In year two you'd make a salary, then a boat with a discount, and you'd get boat wrapped and truck wrapped, all these things," he told Scene.

But in February: "Dead silence. Everyone scattered like cockroaches," he said."We're like in limbo. I've been sending out emails. There were more sponsors we wanted to pick up this year. Normally, when someone wins, sponsors would come flooding in. We've got jack shit. We've got nothing."

He and Cominsky were about to head to Columbus for a big expo, the Walley Slam banquet, where a whole bunch of companies and possible sponsors would be gathered.

They regrouped, and with little in way of definitive proof of cheating, their reputation remained strong enough to keep competing, and keep winning.

But rumors dogged the pair as the wins came not sporadically but in the fishing equivalent of a mathematically improbable poker heater. It was simply not possible, with all the variations and stiff competition, that they would win as often as they did, netting hundreds of thousands of dollars in prizes along the way. Gossip grew after the pair won the Rossford Walleye Roundup, after which, instead of donating their fish to a local food pantry, as is custom, the pair took their fish home, an indication something was fishy with their catch.

(Rossford authorites investigated claims the duo had cheated, but prosecutors declined to bring any charges. The Cuyahoga County Prosecutor's Office, after reviewing evidence in the Sept. 30 incident collected by the Ohio Division of Wildlife, announced today the pair have been indicted on charges of cheating, attempted grand theft, possessing criminal tools, and the unlawful wwnership of wild animals.)

Whatever his feelings about customs, Runyan, in conversation with Scene, seemed to balk at rules and strictures, and questioned polygraphs as an enforcement measure.

"A lot of this spins off the lie detector tests. You don't really know until you're in elbow deep. Like, wait a minute, what do these rules say? You read the fine print. My attorney said these rules are ridiculous. How do you keep it legitimate when a lie detector test isn't admissible in court? It's the arbitrary opinion of one guy. You could have five tests and there would be five different assessments."

He also questioned those in charge, including, by name, Jason Fischer, the director of the Lake Erie Walleye Trail tournament series — the man who was close with them, who saw the rumors dominate the 2022 season, who was relieved when they appeared to be winning honestly, but who this month saw small fish, big numbers, and cut the bellies open in front of a camera.

"Jason Fischer's new rules for the LEWT, they basically say the tournament director is judge, jury and executioner, period," Runyan lamented. Competitions could be less political, rulings less arbitrary, and post-tournament inspections, when necessary, sufficient to prove the integrity of a winner's catch, he told Scene.

And what are inspections looking for, we asked?

"Deception," Runyan told Scene. "When there's been weight added to fish. That's what they're searching for. Either you didn't catch the fish, bought it, or you added weight. If you cut a fish open and there's lead weights in the stomach, well, there you go."
© 2023 Cleveland Scene