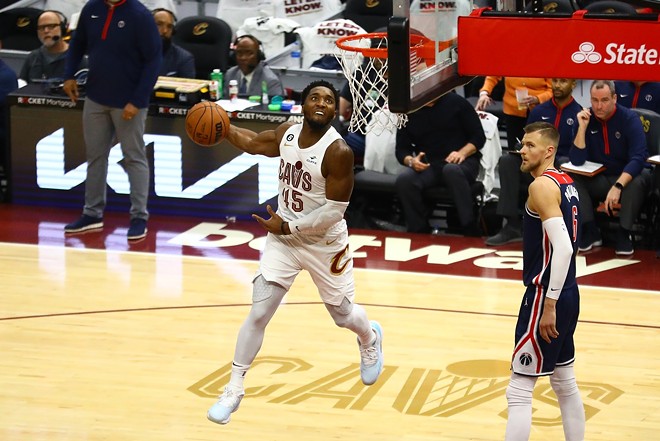 All Rise Film Fest
All Rise: A Festival of Film and Law is a new film festival hosted by the Cleveland State University School of Film & Media Arts in partnership with the Cleveland-Marshall College of Law. The festival takes place today through Saturday at Playhouse Square, with screenings at the Westfield Studio Theater and the CSU School of Film & Media Arts. Focusing on the intersection of film and law, the festival will present a diverse selection of films ranging from documentary to narrative. It all kicks off today at 7:30 p.m. at Westfield Studio Theater with a keynote event featuring Angela Russo-Otstot, the screenwriter, producer and actor best known for her work on Cherry and Captain America: The Winter Soldier. The president of the Greater Cleveland Film Commission, Bill Garvey, will lead the discussion.
csuohio.edu/news/all-rise-fest-csu-explores-intersection-law-film.

Samuel Comroe
Samuel J. Comroe regularly performs at more than 100 clubs and colleges annually. The winner of Ricky Gervais’ Comedy Competition, the guy has more than 100,000 subscribers on his YouTube Channel. His comedy consists of "the trials and tribulations" of living with Tourette Syndrome/ He performs tonight at 7 at Hilarities, where he has shows scheduled through Saturday.
2035 East Fourth St., 216-241-7425, pickwickandfrolic.com.

Boo-Tique
This free trick-or-treat event takes place from 5 to 7 p.m. today at Eton Chagrin Boulevard. At 21 participating stores and restaurants, families can collect candy and participate in other fun activities such as a coloring Station with multiple on-site and take-home sheets and a Balloon Twister featuring fun different animals and more to take home. Daisy Pops will sell Halloween-themed cake pops in Eton’s Local Pop-Up Stand inside the atrium shops.
28601 Chagrin Blvd., 216-241-5490, etonchagrinblvd.com.

Gerstein Plays Schumann
Pianist Kirill Gerstein joins the Cleveland Orchestra tonight at Mandel Concert Hall for a program that features Schumann's Piano Concerto, a piece he wrote for his wife Clara, who was a distinguished pianist and composer. The concert begins at 7:30, and performances take place tomorrow and Saturday too.
11001 Euclid Ave., 216-231-1111, clevelandorchestra.com.

Les Miserables
Set against in 19th century France, Les Miserables has been one of Broadway's biggest hits. Seen by over 130 million people worldwide in 53 countries and 22 languages, the latest incarnation of the musical comes to the State Theatre tonight at 7:30. Performances continue through Saturday.
1519 Euclid Ave., 216-241-6000, playhousesquare.org.

Romeo and Juliet
Great Lakes Theatre company presents its take on Shakespeare's classic play about two young lovers who try to find a way to be together despite interference from their feuding families. Tonight's performance takes place at 7:30 at the Hanna Theatre, where performances continue through Nov. 6.
2067 East 14th St., 216-241-6000, playhousesquare.org.

FRI 10/28
Cocoa Brown
If you've seen any of Progressive Insurance's "Name Your Price" commercials, then you've seen comic Cocoa Brown. In the commercial, this vivacious comedian and actress plays the angered wife whose husband decides he wants to juggle chain saws. Tyler Perry has even taken her on as a vital character in his TV shows and films. Brown's no-holds-barred attitude has gotten her a Screen Actors Guild award nomination; she's now in the process of writing a revealing autobiography and putting together her own one-woman show, The Confessions of a Suicidal Diva. She performs tonight at 7:30 and 10 and tomorrow night at 6:30 and 9 at the Improv. Check the Improv website for ticket prices.
1148 Main Ave., 216-696-IMPROV, clevelandimprov.com.

Halloween Freekout
A live album recorded at Akron’s Rialto Theatre on the eve of local singer-songwriter Brian Lisik’s most recent birthday, Hotsy-Totsy! comes in the wake of eight previous studio releases that Lisik, a veteran area musician, has released. For the live album, Lisik and his current minimalist backing band, the Hard Legs  —  guitarist Robb Myers and drummer Martyn Flunoy (Bizarros)  — took inspiration from the local alternative rock scene of the late '90s that included Lisik's previous band, the Giants of Science. They celebrate the album's release by performing at tonight's Halloween Freekout at the Auricle in Canton. Doors open at 8 p.m., and the Got It Got It Need It and Easton Union open. Tickets cost $10 in advance.
601 Cleveland Ave. NW, Canton, 330-353-8694, theauricle.net.

Jam for the Cure
Monica Robins and the Whiskey Kings along with Billy Morris and the Sunset Strip will perform as part of this benefit for the American Cancer Society. Tonight's concert begins at 8 at MGM Northfield Park — Center Stage.
10705 Northfield Rd., Northfield, 330-908-7793, mgmnorthfieldpark.mgmresorts.com/en.html.

Owls & Howls
Guests are invited to wear costumes to this event at the Cleveland Museum of Natural History that celebrates Ohio’s native animals. There will be current science presentations, and you can take spooky photos in the photo booth and enjoy special wildlife demonstrations in the Ralph Perkins II Wildlife Center & Woods Garden. The event takes place tonight and all day on Saturday and Sunday. Sunday afternoon will also include a concert by students from the Cleveland Institute of Music. The event is free for members and Included with general admission for other guests.
Wade Oval Dr., 216-231-4600, cmnh.org.

SAT 10/29
Beer Tasting and Listening Party
At 3 p.m. today at Saucy Brew Works in Ohio City, local singer-songwriter Chayla Hope will host an album listening and beer tasting party . Hope recently released “Long Way,” the latest single from her debut album. She's teamed up with Saucy for a two-beer collaboration that coincides with the album's release. The first beer, Damn, Feelings, is a super-fruited Imperial Hazy IPA with pink guava, apricot, and blood orange. The second is called Chase the Pain; it's a wheated ale brewed with mango habanero. Both will be available for purchase as today's event.
2885 Detroit Ave., 216-666-2568, saucybrewworks.com.

Dia de Muertos 2022
Though it might not sound like it, the Detroit Shoreway's Dia de Muertos (Day of the Dead) celebration is a family-friendly affair. Kids love to join the Parade of Skeletons that features life-sized puppets and plenty of people in costume. Vendors will set up inside Cleveland Public Theatre's Parish Hall, and Gordon Square Arts District bars and restaurants will have specials. The event kicks off at 11 a.m., and the spectacular Skulls & Skeletons parade starts at 3:30 p.m.
diademuertosohio.com.

The Great Leap
Tonight at the Outcalt Theatre, the Cleveland Play House presents The Great Leap, a play about an American college basketball team travels from San Francisco to Beijing for a “friendship game” against a Chinese squad. Performances continue through Nov. 20. Check the Playhouse Square website for times and ticket prices.
1407 Euclid Ave, 216-241-6000, playhousesquare.org.

Halloweenus 2022: Annual Costume Party
From 8 p.m. to 2 a.m., Lake Affect Studios will host its yearly costume party featuring live music from local artists Napsack and 2ssaint followed by a dance party with DJ Sharktooth from 11 p.m. to 2 a.m. Other festivities include a themed photo booth, costume contest, food, drinks, and a jousting ring. This event is 21+ only. Discounted pre-sale tickets can be purchased online and day-of-event tickets are $25 at the door., 1615 E .25th St., lakeaffectstudios.yapsody.com.

Mushroomhead
The pandemic put Mushroomhead's annual Halloween concert on hold, but now the veteran local band is back at the Agora to keep the tradition alive. Bittersweet Revenge opens the show. Doors are at 6:30 p.m.
5000 Euclid Ave., 216-881-2221, agoracleveland.com.

SUN 10/30
Cavaliers vs. New York Knicks
Led by star forward Julius Randle, the New York Knicks continue to try to recapture the magic that made them a perennial playoff team throughout the '90s. They play the Cavs tonight at 6 at Rocket Mortgage FieldHouse.
One Center Court, 216-420-2000, rocketmortgagefieldhouse.com.

Eliza & the Delusionals
Written by Eliza Klatt and Kurt Skuse with added writing credits from acclaimed songwriters/producers in Sarah Aarons (Zedd, The Rubens, Childish Gambino), John Hill (Cage the Elephant, Charli XCX, Lykke Li) and Keith Harris (Madonna, the Black Eyed Peas), Now snd Then, the latest effort from Aussie rockers Liza & the Delusionals, is a properly international effort. Sessions that took place between Australia’s East Coast and Los Angeles. A tune like "Save Me" features lilting vocals and indie pop harmonies that hearken back to the days of Throwing Muses and Veruca Salt. The group performs tonight at 8 at the Grog Shop. Solon and Madison Pruitt open.
2785 Euclid Heights Blvd., Cleveland Heights, 216-321-5588, grogshop.gs.

From Cleveland, For Cleveland
This interactive, virtual conversation series featuring Monica Potter, Lili Reinhart, Paul Raci, Mark Waters & Dina Spybey-Waters, Alan Ruck and Tom Hanks takes place through November at the historic Capitol Theatre in Gordon Square Arts District. During a moderated talk hosted live via Zoom, each guest will discuss his or her unique perspective on the television and film industry and give advice to aspiring actors. VIP ticket holders will be able to ask questions of the featured guest and all are invited to network with their peers at the conclusion of the presentation. Angela Boehm, Holly Fulger and Lauren Nichols will moderate. Doors open at 6 p.m. and interactive conversation begins at 7 p.m. A portion of proceeds will benefit the Greater Cleveland Film Commission.
1390 West 65th St., 216-651-7295, angelaboehmcasting.com/1st-team/.

Hatebreed
The hard rock act Hatebreed had been around for a few years before it signed to a major label for its 2002 album, Perseverance. That album became a huge breakthrough for the group and firmly put it on the hardcore/metalcore musical map., it represented a breakthrough not just for Hatebreed but for heavy music in general. A song such as the anthemic "I Will Be Heard" features parched vocals and heavy percussion. The song delivers a real sense of urgency as Jamey Jasta screams lines like "I won't accept this fate." Hatebreed’s tour marking the album’s 20th anniversary comes to the Agora tonight. Expect the band to revisit a handful of tunes from Perseverance. The show starts at 6 p.m.
5000 Euclid Ave., 216-881-2221, agoracleveland.com.

Jokes on You
Inspired by crowd work clinicians like Dave Attell, Ian Bagg, and Big Jay Oakerson, Jokes On You makes the audience the center of the show by "pushing comics to avoid prepared material or written jokes and instead focus on organic interaction with the audience," as it's put in a press release about this event, which takes place tonight at 7 at Hilarities. John Bruton and Bill Squire host the event. Last Sunday of every month.
2035 East Fourth St., 216-241-7425, pickwickandfrolic.com.

The Wood Brothers
Celebrating the release of their seventh studio album, Kingdom in my Mind, a recorded live audio to tape session, the Wood Brothers perform tonight at 7:30 at the Kent Stage. Kingdom follows the band's most recent studio release, 2018’s One Drop of Truth, which hit No. 1 on the Billboard Heatseekers Chart and gave the band its first Grammy nod for Best Americana Album.
175 E. Main St., Kent, 330-677-5005, kentstage.org.
© 2023 Cleveland Scene