Ronayne and Weingart Slash and Clash at Public Transit Forum 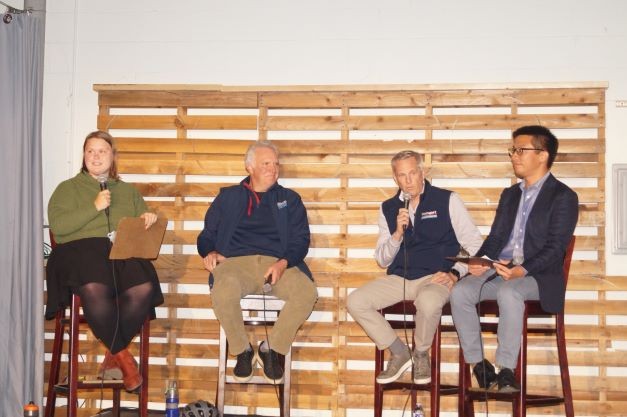 The candidates for Cuyahoga County Executive, Democrat Chris Ronayne and Republican Lee Weingart, appeared alongside each other Thursday evening for a rollicking topical forum on public transportation at Goldhorn Brewery.

The forum was the third such event in recent days — one on health and human services and another on housing were staged earlier in the week — and both candidates' central talking points are by now almost rote. But each time they convene, tension burbles as they present competing, mostly distinct, visions for the future of the county.

Ronayne is the collaborative leader, the experienced nonprofit executive and collegial public servant who has proposed new departments to address specific county failings — transportation and mobility among them. He is energized to work with mayors in the region and to restore trust in government by elevating the region's physical and economic health.

Weingart is the shrewd and penny-pinching lobbyist, keen on government efficiencies and robust health and human services. He wants to focus on marquee programs to bring wealth to the urban core, including his oft-repeated 10,000 homes initiative, which would provide grants and low-interest loans to prospective homeowners.

Brisk and peripatetic, the hourlong forum sponsored by Bike Cleveland and Clevelanders for Public Transit featured questions prepared by the event hosts and by audience members, many of which focused on RTA operations and complete streets policies.

Credit to Weingart, who, in an atmosphere of enthusiasm for public transportation, was unafraid to stick to his guns. He firmly opposed both a tax levy to fund RTA and a tax on surface parking lots to fund transit.  When asked about specific infrastructure projects — protected bike lanes, for example — he admitted that these were not his priorities. He said he'd be happy to work with the groups present, but that in general, he believed these issues could be more effectively managed by individual municipalities. As County Executive, he intended to focus foremost on housing, jobs and security.

In response to one audience question about lakefront access and lakefront development, Weingart said that, contra the city of Cleveland's likely approach, which would start with development downtown and work eastward, he would begin by investing in Gordon Park at E. 72nd Street. His aim was to create the east side equivalent of Edgewater.

He committed to a "top-down audit" of every private police department in the county, including RTA's, (and University Circle's, of course — Weingart never misses an opportunity to attack Ronayne for that police department's racist ticketing record). In a question about bike and scooter share companies, he said that while he supported their expansion, there likely wouldn't be sufficient demand in many suburban communities to justify their presence. He proposed the idea of new corporate sponsorships to subsidize pilots in specific areas.

Ronayne was once again in his element, with personal experience to color and contextualize answers to virtually every question: Had he ever lived car-free? Yes. When was the last time he rode public transit? Tuesday.  Was he concerned about the lack of provisions for public comfort in publicly subsidized spaces like Public Square? Was he ever! In fact, as the City of Cleveland's Director of Planning, he'd created the "City Racks" program, through which he purchased 500 bike racks and 500 benches to install around town. Ronayne rode his friggin' bike to the forum, for God's sake, and was amped to make Cleveland "Trail City USA."

From the earliest moments of his campaign, Ronayne has proposed a county department of transportation and mobility. He understands that public transit is an equity issue, especially in a county where 12% of residents do not have access to a personal vehicle, and intends to make transit funding a priority. That said, Ronanye would not commit to new taxes either. He said he would lean on the state legislature to provide additional dollars, (a prospect many advocates now regard as a fool's errand, given the hostile Republican state government), and that he'd explore both carrots and sticks as it related to transit components of development projects.

In a lightning round, both Ronayne and Weingart affirmed their support for a laundry list of issues: all-door boarding on the HealthLine, RTA riders on the RTA board and incentives for county workers who commute by bike or public transit. They offered more qualified support in other areas.

One of the evening's biggest bombshell news nuggets was not directly related to public transit. In response to a question about the relationship between RTA's police department and the unhoused population, Ronayne mentioned that he'd met with the Northeast Ohio Coalition for the Homeless last week. He said he'd committed, alongside NEOCH Director Chris Knestrick, to end unsheltered homelessness in Cuyahoga County.