Legal action from the Jewish community has begun in Florida, Indiana and Kentucky. 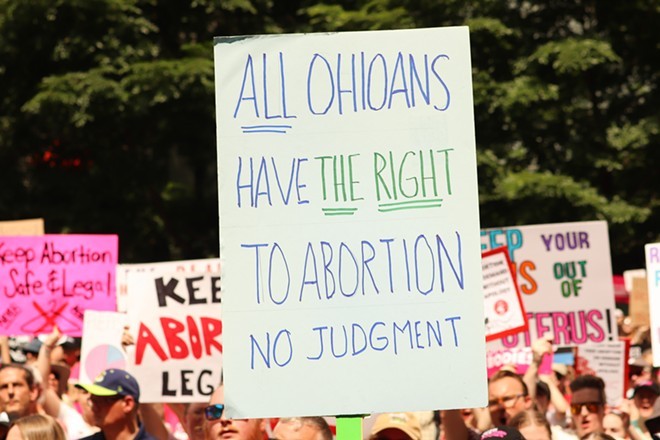 Photo: Mary LeBus
Local Jewish Rabbis are reacting to testimony from the state of Ohio that cites the Christian faith while defending a six-week ban on abortion access.

In a battle that has long ebbed between science and religion, Republicans in Ohio have begun using explicitly Christian rationale to try and limit abortion care access for everyone in the state.

During an Oct. 7 hearing in a Hamilton County Court, Judge Christian Jenkins ruled to indefinitely block the state of Ohio’s six-week abortion ban.

In the case Preterm Cleveland v. Dave Yost, Jenkins heard testimony from doctors on both sides (Ohio attorney general Dave Yost is a Republican). Preterm Cleveland, made up of a large network of Ohio abortion providers, put forth a University of Maryland doctor with three decades of working with high-risk pregnancies, while the state brought up a retired Cedarville University biomedical ethics professor who called abortion a violation of those ethics.

The state's witness Dr. Dennis Sullivan, who recently retired from the Christian college as a professor of pharmacy practice and director of the center for bioethics, told the court he had no OB/GYN training or experience and that he's never witnessed an abortion being performed.

Still, he testified for the state that his research into “personhood” supports his belief that life begins at conception. That research, a scholarly article on “human embryo metaphysics,” says the idea that humans’ “intrinsic value” begins at conception “is crucial to the most prominent Christian understanding of human dignity.”

That use of the phrase “Christian understanding” is enough to make Rabbi Lindsey Danziger feel that the state of Ohio may be teetering on imposing a single religious viewpoint on its citizens.

“Bringing in a Christian theologian I think makes it pretty clear it’s a Christian viewpoint of when life starts,” Danziger says. “It’s not the jewish viewpoint.”

RAC_OH filed an amicus brief in the case of the Preterm Cleveland v. Dave Yost when the case was brought up on a state level.

“When it was on the state level, we did work on an amicus brief in support of those providers because we believe it violates our religious freedom and violates the establishment clause," Danziger says.

Once the lawsuit was moved from the state supreme court to Hamilton County an amicus brief could no longer be filed. But Danziger says RAC_OH's support for Ohio abortion providers still stands and that a ban on abortions at the detection of a fetal heartbeat (medical experts say that this is not an actual heartbeat, but rather sporadic electrical flutters) is inherently at odds with the Jewish faith.

“Jewish tradition teaches that life begins and ends with breath. Life starts with the first breath and ends with your last breath,” Danziger says. “The word in Hebrew for breath, nephesh, is the same as the word for soul. That being said, a fetus in Jewish legal tradition isn’t not a life, but it’s not a life – it’s kind of something in between a life and not a life, it’s a potential life.”

Multiple anti-abortion bills in the Ohio legislature offer very narrow exceptions for the health of the patient. Danziger says the Jewish view of abortion strongly accounts for the life of the pregnant person.

“There’s a lot of examples in Jewish law that a fetus is treated differently than a human life, to the extent that Jewish tradition teaches that if a pregnant individual’s life is in danger it’s not just permitted but it’s commanded to terminate the pregnancy,” Danziger says. “I think it’s really problematic as someone who is not a Christian if the state is establishing a religion, that is against the constitution."

But some experts in Judaism say that years of incremental Christianity-centric legislation may actually herald something different now. Rabbi Noah Ferro is part of the Northern Hills Synagogue in Mason. He theorizes the state’s current choice to use Sullivan's Christianity-based testimony in place of a doctor with actual OBGYN experience is actually a sign of rising secularism, not Christian-based politics.

“I don’t think we have the sense that we are poised for some sort of dissent into a sort of dark age for religious equality in our country,” Ferro says. ”This may be a part of a larger process of demographic change, the death throes of religion and religiosity as completely normative and widespread in our culture. I think if you’re looking at population studies that’s something that they seem to suggest. That, by and large, more Americans, especially young Americans, fall into that category of the ‘nones’, those who don’t identify as having any particular religious identity.”

Legal action from the Jewish community

Danziger doesn’t know if legal action from the Jewish community is on its way in Ohio yet, but she points to cases in Florida, Indiana and Kentucky in which Jewish people are suing the state for infringing on religious freedom by attempting to ban abortions.

“They say as Jewish women, it infringes on their religious freedom to deal with their pregnancies in a way that is consistent with their faith beliefs,” Danziger says. “As Rabbis and clergy and spiritual leaders, Ohio’s abortion law really gets in the way of our ability to advise our congregants and those coming to us seeking council on Jewish law and tradition that is consistent with our faith beliefs and traditions.”

Danziger emphasizes that she is a Reform Rabbi and that not all Jewish people share the exact same views on abortion, though PEW Research data indicates the vast majority of the nation's Jewish population is in favor of abortion care access in all or most cases. The same research also shows the majority of Orthodox Christians and Catholics are in favor maintaining abortion care access, though the margins are slimmer.

Ohio attorney general Dave Yost’s office announced plans to appeal the decision from Judge Jenkins on Oct. 13, saying they have the support of Gov. Mike DeWine. Neither Yost's office or DeWine's office have responded to a request for comment on the appeal or the state’s choice to include testimony from Sullivan by press time.

Ohio gubernatorial candidate Nan Whaley says that she's not surprised by Ohio's choice to present a witness with an obvious Christian-based argument.

"It's the only point of view they can have, for this" Whaley says. "Our whole medical system is based on evidence-based, and evidence-based is not religious-based."