100 years of history with a question for the present day 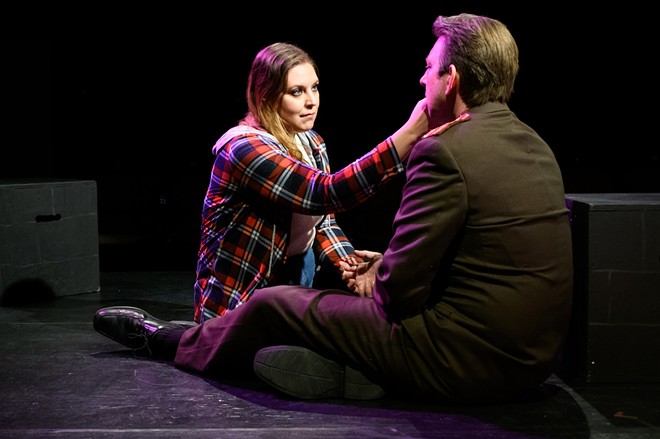 Late in the engrossing play "Describe the Night," a character says, “Behold...the black magic marker. The most useful tool in all of communism. There is nothing that cannot be eventually crossed out and changed. This is what we are here to do.” And that is what this script by former Clevelander Rajiv Joseph is doing at Ensemble Theatre. Joseph and director Celeste Cosentino explore the intricate filaments of truth and untruth that composed government rule in the past 100 years, and then subtly asks us to look at our own country and consider the mess we currently confront.

A history play infused with magical realism, DTN uses 12 separate scenes over almost three hours to follow eight characters, some real and others not, a couple of whom are busy imposing a manufactured version of truth on the others. At the beginning Nikolai is a scruffy soldier in the Red Calvary in 1920 who by chance meets Isaac Babel (the real writer and journalist). Isaac shares his diary and invites his new pal to "describe the night," noting that they each could describe it differently and yet each description would be "true." Nikolai takes note.

As the years pass, their careers take different paths, with Isaac being recognized as an acclaimed writer and Nikolai becoming chief of the NKBD, Russia's secret police from 1934 to 1946. As Nikolai, David Vegh is by turns amusing (a when he relates the secret of reading people's minds: lip-locking onto a goat's ass and breathing deep) and terrifying as we see him evolve from his early belief that "true is what happens; false is what doesn't happen" into a formula that is much more malleable.

Joe Pine's Isaac grows both in fame and in humanity, and years later when he meets Nikolai's wife Yevgenia, the magical parts of Joseph's complex tale rachet up. She is a fascinatingly indomitable creature, a woman of seemingly modest bearing with a fondness for playacting and leech soup. Laura Perrotta makes Yevgenia irresistible and eventually heartbreaking when she is consigned to an asylum in her later years by her, um, loving husband.

Several of the scenes are introduced by the KGB officer Vova, who announces the "facts" of recent events, including the crash of a plane that killed many high-ranking Polish officials in 2010. Aaron Elersich is properly stiff and curt as Vova when in his official capacity, but in other scenes he skillfully reveals much more of his "true" nature. That happens especially when he interacts with Urzula (Katie Wells), a woman he has under surveillance.

There are still more more threads in this dense and fascinating fabric of a play, with the reporter Mariya (Laura Rauh, who also doubles as Mrs. Petrovna) seeking shelter from the police in a Smolensk car dealership clerked by Feliks (Kyle Huff).

This is all performed on a black rectangle stage with black boxes used as chairs, tables, and bushes, along with some illuminated cubes. There are projections of art on an upstage screen— photos and a video—along with a few tall white birch trees set up here and there. Not really necessary. All these accomplished actors and director need is that black rectangle to bring this play to vibrant life.

There aren't many happy endings in this piece. But there are exceptional performances plus a rich and bounteous tale that speaks volumes today. Why deal with truth when fiction, fantasy and lunatic conspiracy theories (ie. JFK reanimating to usher Donald Trump back into power) are so much more satisfying and downright fun. What kind of world will this year's elections plunge us into if we don't vote in massive numbers to keep some from "crossing out and changing" our teetering democracy?