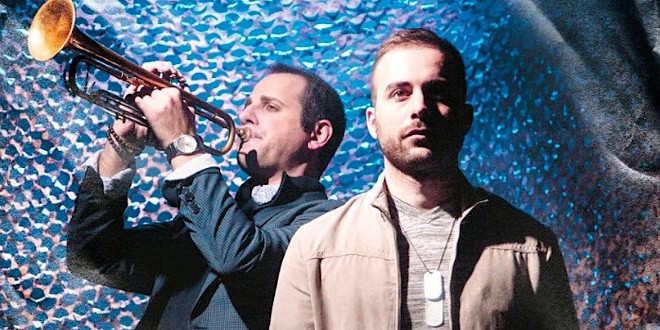 Courtesy of Jim Wadsworth Productions
Dominick Farinacci (left) and Jaymes Poling.
Back in 2017, trumpeter Dominick Farinacci and Jaymes Poling created Modern Warrior Live, an immersive music and narrative experience that chronicles the story of U.S. Army veteran Jaymes Poling’s three deployments in Afghanistan and subsequent transition back home. Narrated by Poling, the autobiographical production weaves together Poling's story with a cast of artists in multiple genres.

The production “shares a personal and emotional journey of the challenges of military service and the experience veterans face when they return back home and is a catalyst for meaningful conversation about mental health,” reads a press release. It’s been presented more than 125 times and reached more than 10,000 veterans, 30,000 civilians. It’s connected more than 4,000 veterans to veteran and mental health service providers.

Dominick Farinacci will bring his national touring production of Modern Warrior Live back to Cleveland on Thursday, Nov. 17, at the Simon and Rose Mandel Theatre on Tri-C’s Eastern Campus. The performance takes place at 7 p.m.

Tickets are free for veterans and their families.

The performance is the first part of a two-year grant awarded to Modern Warrior Live by the National Endowment for the Arts Creative Forces Community Engagement Grant in partnership with Mid-America Arts Alliance. MWL is one of 26 organizations nationwide to receive this award.
© 2023 Cleveland Scene