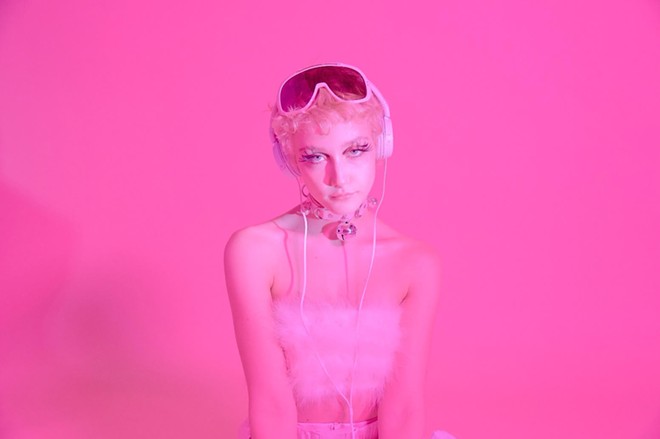 Courtesy of Elektra Entertainment
Chloe Moriondo.
Our weekly picks of the best things to do in Cleveland this weekend. Also check out our full Cleveland event calendar.

THU 11/17
Chloe Moriondo
This Detroit native started out by just plucking away on the ukulele and guitar in YouTube videos filmed in a bedroom. Now, Chloe Moriondo has made appereances on Jimmy Kimmel Live! and The Late Late Show with James Corden.The singer-songwriter performs at 8 tonight at the Beachland Ballroom. The tour supports her new album, Suckerpunch. Dreamer Isioma opens.
15711 Waterloo Rd., 216-383-1124, beachlandballroom.com.

El Niño
For his oratorio El Niño, famous American composer John Adams imagines a modern-day miracle, retelling the story of the Messiah through a "constellation of references from medieval chant to contemporary Latin American poetry." He comes into town tonight to conduct the Cleveland Orchestra as it plays the piece at 7:30 at Mandel Concert Hall. Performances also takes place tomorrow night and Saturday night.
11001 Euclid Ave., 216-231-1111, clevelandorchestra.com.

The Great Leap
Tonight at 7:30 at the Outcalt Theatre, the Cleveland Play House presents The Great Leap, a play about an American college basketball team travels from San Francisco to Beijing for a “friendship game” against a Chinese squad. Performances continue through Sunday. Check the Playhouse Square website for times and ticket prices.
1407 Euclid Ave, 216-241-6000, playhousesquare.org.

Lorna Shore
After releasing an EP and the hit single “To the Hellfire” last year, the New Jersey quintet brings its tour in support of its fourth full-length album, Pain Remains, to House of Blues tonight at 6. The band's become so popular that it currently shares magazine covers with metal heroes such as Ozzy Osbourne, Megadeth and Lamb of God.
308 Euclid Ave., 216-523-2583, houseofblues.com.

Modern Warrior Live
Back in 2017, trumpeter Dominick Farinacci and Jaymes Poling created Modern Warrior Live, an immersive music and narrative experience that chronicles the story of U.S. Army veteran Jaymes Poling’s three deployments in Afghanistan and subsequent transition back home. Narrated by Poling, the autobiographical production weaves together Poling's story with a cast of artists in multiple genres. Farinacci will bring his national touring production of Modern Warrior Live back to Cleveland for a performance at the Simon and Rose Mandel Theatre on Tri-C’s Eastern Campus. The performance takes place at 7 tonight.
4250 Richmond Road, Highland Hills, 216-987-5536, tri-c.edu.

Rock Hall Nights
The Rock Hall stays open until 9 tonight as it celebrates the grand opening of the new 2022 Inductee exhibit. The Rock Hall house band the Mechanics will play an all-Inductee playlist, and special featured artifacts from the vault will be on display. Tickets cost $25.
1100 Rock and Roll Blvd., 216-515-8444, rockhall.com.

FRI 11/18
Capone
Comedian Derrick "Capone" Lee served nine months in jail in the early '90s, He successfully left that life behind, however, when he turned to comedy. He performed for the first time ever at Columbia University and hasn't looked back. His material often centers on subjects such as racism and social inequality. Capone has shared the stage with big-name comics such as Mike Epps and Tracey Morgan. He performs tonight at 7:30 and 10 at the Improv and has shows scheduled at the club through Saturday.
1148 Main Ave., 216-696-IMPROV, clevelandimprov.com.

Cavaliers vs. Charlotte Hornets
The Cavaliers take on the Charlotte Hornets tonight at 7:30 at Rocket Mortgage FieldHouse. Led by guard LeMelo Ball, the Hornets are a balanced team with several players capable of scoring in the double figures each night. The team is off to a slow start this season, however, and the Cavs, if healthy, show get the win tonight.
1 Center Court, 216-420-2000, rocketmortgagefieldhouse.com.

Christmas with C.S. Lewis
David Payne stars in this play about how author C.S. Lewis turned from atheism to Christianity and began to celebrate Christmas in earnest each year at his home near Oxford. Tonight's performance takes place at 8 at the Hanna Theatre, where performances continue through Sunday. Tickets cost $64.
2067 East 14th St., 216-241-6000, playhousesquare.org.

Chad Daniels
Babyfaced comic Chad Daniels likes to joke about how immature he was as a kid — and how immature he continues to be as an adult! He says that when his son became a teenager, his wife asked him what to do. He says he told her that they need to knock on their kid's door because "teenage boys are the most disgusting creatures on the planet." That's just one of many bits that he's come up with based on personal experience. He performs tonight at 7 and 9:30 tonight and tomorrow night at Hilarities.
2035 East Fourth St., 216-241-7425, pickwickandfrolic.com.

Friday Night Lights!
The Cleveland Museum of Natural History stays open until 8 tonight to feature special programming, including current science presentations, gallery talks, up-close looks at the museum’s animals, in-depth conversations with curators and special guests, and access to the Ralph Mueller Observatory, weather permitting. The events are free for members. For nonmembers, normal admission rates apply, and guests who purchase a ticket at any time on Friday are welcome to stay past 5 p.m. at no additional cost.
1 Wade Oval Dr., 216-231-4600, cmnh.org.

Sorry
This indie rock band worked with Portishead’s Adrian Utley to complete its latest album, Anywhere But Here, an attempt to merge the sound of classic '70s songwriters while addressing feelings of anxiety and isolation. Songs such as "Anywhere But Here" feature angular guitars that speak to the uncertainty of the past two-and-a-half years. The group performs tonight at 7 at Mahall's 20 Lanes. Tickets cost$13.
13200 Madison Ave., Lakewood, 216-521-3280, mahalls20lanes.com.

SAT 11/19
Artist in the Atrium: The Beauty of Beadwork
Today from noon to 4 p.m. in the Ames Family Atrium, artist and educator Marlys Rambeau (Lakota), a long-time member of Cleveland’s Native American community, demonstrates the techniques and materials used in Indigenous beadwork of the Great Plains, examples of which are on view in gallery 213. Admission is free.
11150 East Blvd., 216-421-7350, clevelandart.org.

Crocker Park’s Annual Tree Lighting: A Grinchmas Party with Santa
A whole cast of holiday characters will take the stage at 7 tonight at Crocker Park to perform an hour-long Grinchmas show and will then welcome Santa to help light a giant Christmas tree. Leading up to the big performance and lighting, Crocker Park’s holiday attractions, including the Real-Ice Skating Rink, Santa’s Village and Gift Shop, a holiday market with local vendors and a Selfie Station on Santa’s Sleigh will all open at noon. Admission is free.
189 Crocker Park Blvd., Westlake, crockerpark.com.

Ryan "Dr. F." Farrell Recital
When the pandemic shut down touring, Mushroomhead's Ryan "Dr. F." Farrell went back to college to finish his Bachelor's degree in Music Composition at Cleveland State University. He had stopped taking classes and participating in the program back in 2007 because of Mushroomhead's hefty touring schedule. After finishing his Bachelor's, Farrell decided to get his Master's degree as well and "capitalize on the COVID downtime."  Having finished his degree, his recital in composition for the Master of Music degree takes place at 7:30 tonight at Waetjen Auditorium on the CSU campus. Admission is free, and it's open to the public.
CSU Music & Communications Bldg., 216-687-5018, csuohio.edu.

Magic Night: George Tait
George Tait has authored several books both on conjuring as well as a fantasy horror story (and audiobook/podcast), titled How to Kill a Piano. He has also authored over a dozen trade publications under a secret nom de plume that is respected by an international audience of professional magicians. Recognized for his critical thinking lectures and his theatrical mind readings, he performs tonight at 8 at Wizbang Theatre in Cleveland Heights. Pinch and Squeal host, and Sweet Keith provides the musical soundtrack on piano.
2134 Lee Rd., Cleveland Heights, 216-534-9482, wizbangtheatre.com.

Tim Mirth's Guitar Band
Inspired by both John Coltrane and Jimi Hendrix, local guitarist Tim Mirth recently released a live album featuring tunes by his former band Stellar Regions. The release even received a nice write-up in nice write up in Psychedelic Baby magazine. Though that group has since dissolved, Mirth has recently formed a new group, simply dubbed Tim Mirth's Guitar Band. The group performs tonight at 8 at the Bop Stop, and Mirth says a few Stellar Regions tunes will make their way into the set.
2920 Detroit Ave., 216-771-6551, themusicsettlement.org.

Panza Foundation Benefit
As part of the annual Panza Foundation benefit, local acts Oregon Space Trail of Doom, MuAmin Collective, Biitchseat and Marcus Alan Ward will perform at the Happy Dog. The show starts at 7:30 p.m., and tickets cost $10. There will be a huge raffle featuring music gear, services, gift certificates and "all sorts of stuff." Plus, recipients of Panza Foundation grants for 2023 will be announced.
5801 Detroit Ave., 216-651-9474, happydogcleveland.com.

Rock Solid: Supporting Live and Local Music
Local acts such as Apostle Jones, Ray Flanagan and the Mean Machines, and Brent Kirby and Alex Bevan perform at this special event at the Beachland Ballroom that will feature raffles and a silent auction to benefit Cleveland Rocks: Past, Present, Future. Doors open at 7 p.m., and general admission tickets cost $50.
15711 Waterloo Rd., 216-383-1124, beachlandballroom.com.

JB Smoove
Famous for his portrayal of Leon, a fast-talking friend of Larry David's on the HBO hit Curb Your Enthusiasm, comedian JB Smoove was born in North Carolina and grew up in New York. He started his career back in 1999, when he moved to Los Angeles and landed a recurring role on MTV's The Lyricist Lounge Show. He also starred opposite Adam Sandler in Mr. Deeds. After a season as a cast member on the sketch comedy program Cedric the Entertainer Presents, he worked as a writer on Saturday Night Live before landing the Curb Your Enthusiasm gig. Smoove performs tonight at 7 at the Agora.
5000 Euclid Ave., 216-881-2221, agoracleveland.com.

SUN 11/20
Cavaliers vs. Miami Heat
Though their record at this point in the season might not reflect it, the Heat are one of the best teams in the NBA's Eastern Conference. Led by star forward Jimmy Butler, they come to Rocket Mortgage FieldHouse to take on the Cavs tonight at 7.
1 Center Court, 216-420-2000, rocketmortgagefieldhouse.com.

From Cleveland, For Cleveland
This interactive, virtual conversation series featuring Monica Potter, Lili Reinhart, Paul Raci, Mark Waters & Dina Spybey-Waters, Alan Ruck and Tom Hanks takes place through December at the historic Capitol Theatre in Gordon Square Arts District. During a moderated talk hosted live via Zoom, each guest will discuss his or her unique perspective on the television and film industry and give advice to aspiring actors. VIP ticket holders will be able to ask questions of the featured guest and all are invited to network with their peers at the conclusion of the presentation. Angela Boehm, Holly Fulger and Lauren Nichols will moderate. Doors open at 6 p.m. and interactive conversation begins at 7 p.m. A portion of proceeds will benefit the Greater Cleveland Film Commission.
1390 West 65th St., 216-651-7295, angelaboehmcasting.com/1st-team/.

Nemr
Critics credit Nemr, a Lebanese/American standup comedian, with establishing the standup comedy scene throughout the Middle East. Nemr actually grew up in San Diego but then moved back to Lebanon with his family, where he sought to "break down barriers." He performs tonight at 7 at Hilarities. Check the club's website for ticket prices.
2035 East Fourth St., 216-241-7425, pickwickandfrolic.com.

Trans-Siberian Orchestra
This year’s Trans-Siberian Orchestra tour will feature an updated presentation of Ghosts of Christmas Eve. The second set will feature an assortment of other TSO hits. Expect the usual quotient of lasers and pyro during the highly theatrical performance. Performances take place at 3 and 8 p.m. today at the Covelli Centre.
229 East Front St., Youngstown, 330-746-5600, covellicentre.com.