Here Are Ohio's Favorite Thanksgiving Side Dishes, According to Google Trends

We appear to be nutty about stuffing 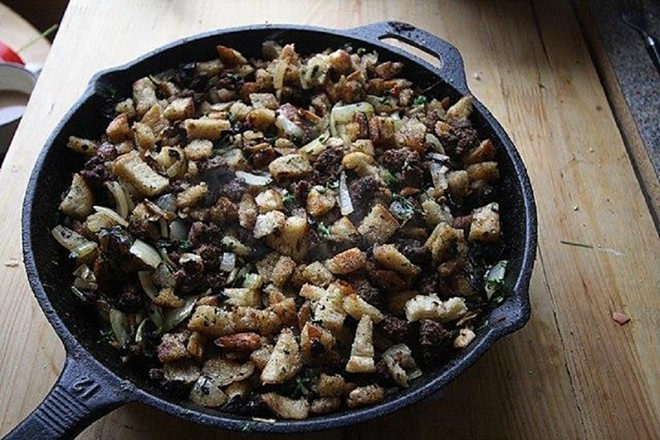 Photo: Wheeler Cowperthwaite/Wikimedia Commons
Give the Buckeye State that stuffing

As Thanksgiving approaches, we’re all daydreaming about the turkey and sides we’re going to pile on our plates.

But what dishes on the Thanksgiving table do Ohioans reach for the most? To find out, BetOhio.com analyzed data from Google Trends. They looked at the search terms for the most popular Turkey Day sides in Ohio between Nov. 1-30, 2021. Those were stuffing, mashed potatoes, mac and cheese, sweet potato casserole, green bean casserole, Brussels sprouts, candied yams and cranberry sauce.

Stuffing took top dish at 24%, followed closely by mac and cheese at 23%. Tied for third at 20% were mashed potatoes and green bean casserole, and sweet potato casserole took fifth at 13%.

BetOhio.com also looked at how the largest cities in the state chose their favorite dishes. In Cincinnati and Columbus, mac and cheese won top spot with 25%. In Cleveland, it was stuffing at 28%, and Toledo and Dayton favored veggies with green bean casserole at 28% and 22%, respectively.