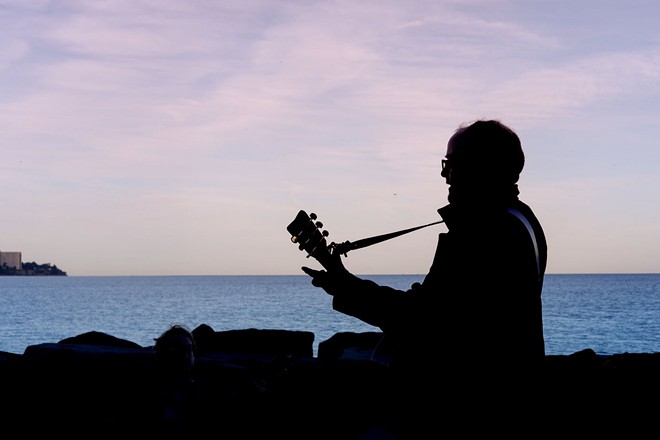 Courtesy of Alan Madej
Alan Madej.
Forty-two-year-old singer-songwriter Alan Madej, who’s been recording since 1999, will celebrate the release of his 13th full-length album, Leave a Light On, with a performance on Friday at the Five O’Clock Lounge in Lakewood. His friends Ray Arthur Flanagan and Ashley Brooke Toussant share the bill.

For much of the past 10 years, Madej has been playing live and recording albums with his brother, Lex Moda of local band Cellophane Jane, and bass player Charlie Loudin. On this album, he enlisted long-time collaborators Michael Harold Doty and Jerry Crist with Doty taking over much of the production on this one using the basic tracks laid down by Madej and his brother.

“My brother and I set upon the task in trying out different ways of recording since we weren't able to incorporate a full band setting most of the time,” says Madej. “I decided to contact my friend Michael Harold Doty, with whom I have collaborated on and off over the last four years. Being in lockdown and Michael living in Elkhart, IN, an idea was formed that I'd record the basic vocals and acoustic guitars with my brother in Ohio and would send everything over to Doty to do with as he pleased, adding guitars, bass, drums, keys, synths and background vocals, engineering, mixing and producing the proceedings. Our friend Charlie Loudin finishing the process. Giving him free reign to incorporate his ideas over my original bare-boned songs opened up venues and other soundscapes I might not have suggested or thought up brought new energy and freshness to the recordings.”

Songs such as "Leave a Light On" and "A Time and a Place" were originally written by Doty. The eight-song album is rich with lush ballads. It's apparent that Doty had  creative freedom with the production and arrangements.

The album is full of the usual sentiments of love and the search for human harmony. It features the Beatle-y melodies one might find on a Madej album and offers caressing vocals. Madej decided to leave out the rockers for this one, and that's not a bad thing. So while listening, you can kick back, crank it up and feel its warmth.

The Bowie-esque “Burning Bright” soars with melody and harmony. Its dreamy textures, starry ambiance and George Harrison-sounding guitar swaths are as gentle as a fleece blanket. “Madison Is Cold” feels like a warm cup of coffee on a snow day with its Beach Boy-flavored choruses and tranquil and somewhat somber verses. "Madison Is Cold," a likely reference to the street in Lakewood near where Madej lives, is about as dream-pop as one can get.

The first stanza of “Madison Is Cold” pulls the listener in with its candid speech and meditative observations.

“I just tried to express my thoughts and feelings over the last few years [by] trying to channel a path of hopefulness and light,” explains Madej. “Keep moving forward was my goal. Remembering you're not alone. Getting back into the groove, practicing, learning new songs and getting ready for more recordings and collaborations in the upcoming year, I feel the Madej band is getting back to boppin' about and hopefully gearing up for some interesting spaces ahead.”